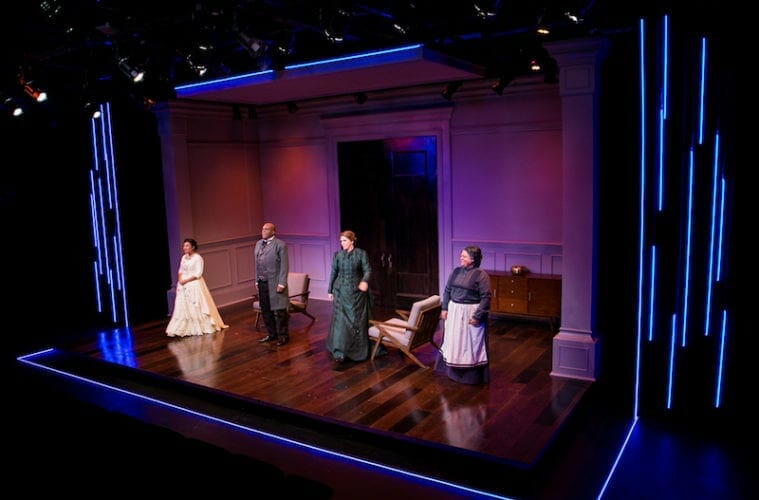 Emory nurses, 18 metro theaters studying how to put the shows safely back onstage

Have a pandemic? Run a theater? Call a nurse.

It’s not quite that simple, but as metro theaters ponder if, when and how to reopen in the season of Covid-19, they’re relying on intel and safety advice from a highly degreed team of Emory University experts.

That team — from the Nell Hodgson Woodruff School of Nursing — is partnering with 16 theaters and two dance companies, using a scientific evaluation tool aimed at analyzing and fortifying the process of making art.

The findings, expected by the end of August, will become standard operating procedures for the theaters, offering guidelines on how to securely come back from the Covid crisis, along with individualized recommendations for each space. 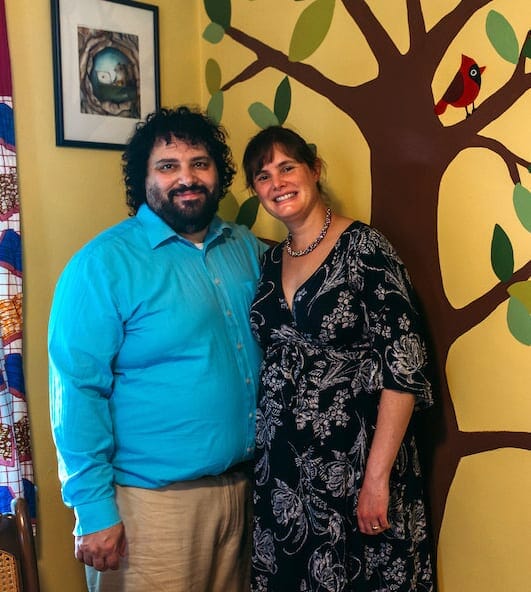 The plan was hatched by husband-and-wife Alex Scollon of Actor’s Express and Helen Baker of Emory University. (Photo by Chanda Williams)

The idea was born during a dinnertime conversation in March between Alex Scollon, managing director at Actor’s Express in West Midtown, and his wife, Helen Baker, an assistant professor and global and community engagement coordinator at Emory’s School of Nursing.

“People were mostly focused on getting audiences in safely and what we could do to make sure that people weren’t spreading Covid-19 while sitting in a theater,” Scollon says. “But there wasn’t a lot of conversation about backstage people or actors, which are honestly some of the more challenging issues.”

Baker, who’s on a Covid-19 task force, needed to find a way for students to satisfy their required clinical hours after the school’s usual community partners dropped out. She and Scollon devised a plan and pitched it to their professional circles.

The theaters signed on almost immediately, but the School of Nursing needed more convincing. Through at least six meetings, many conversations and even more emails, Baker made the case that “this was an opportunity to do really good public health nursing and do it in a really innovative way.”

Emory’s Dr. Quyen Phan, one of the project’s architects, was an early skeptic. She worried about the logistics of pulling in a teaching team of eight who’d be responsible for some 110 fresh, new students tasked with rapidly immersing themselves in the theater community — a somewhat unorthodox area of clinical study.

“To be honest with you, I was very ignorant,” Phan says of Atlanta’s theater scene. “I was aware of the struggles the community faces because you hear about it all the time. People are losing jobs because you can’t perform in front of a live audience. That much I knew, but the details? Not so much.”

Early-rehearsal table readings like this one in January for “School Girls; or, the African Mean Girls Play” at True Colors Theatre, are likely to be much less cozy moving forward. (Courtesy of True Colors)

Baker kept at it, and “spent a long time explaining what theater does and that it’s more complicated than many think it is but that this would be a useful experience.” It took 10 days to structure the project and roll it out. Compared to most clinical studies, that’s unbelievably fast, Baker says. That’s why this effort is framed as a “research project.”

The Nursing School team divided the business of theater into three focus areas: Artist (rehearsal and performance), Audience (front-of-house procedures before, during and after shows) and Backstage (building, installation and operations). One track was assigned to one of three doctoral students to supervise.

The students scrutinized backstage photos and building blueprints, trying to replicate the experience and logistics of walking through each theater. Sometimes they drove by to peek into buildings while maintaining a safe distance. 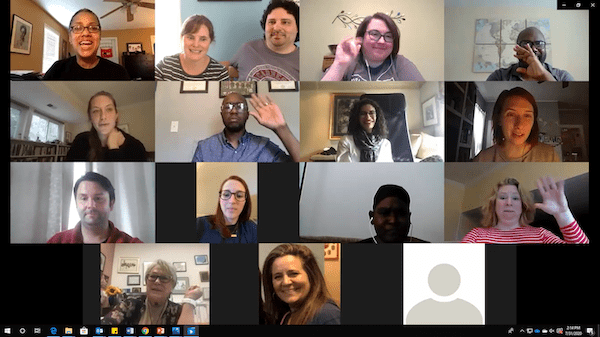 The students asked detailed questions: Is it always possible to keep your artists at least six feet away from each other? Are the stage and backstage areas big enough to accommodate that? If an actor comes in with a fever, what happens? If a patron doesn’t want to wear a mask, what happens? What about quick changes backstage or prop handoffs? Can you make sure everyone changes gloves after each new interaction?

“A lot of times, people in the health world have a very paternalistic approach and assume they know more about the community,” Phan says, “but they don’t. If you work and listen to the community, you’ll be successful. That’s exactly what [the students] have achieved. We’ve interviewed key informants. We formulated questions, and the students looked for evidence about guidelines for isolation or disinfection or the reopening of the theater.”

Chandra Stephens-Albright, managing director at True Colors Theatre, says that the 18-organization coalition of theaters grew out of an atmosphere of collaboration that preceded the pandemic, a contrast to the competitive atmosphere she experienced during 22 years at the Coca-Cola Co.

When Covid-19 closed theaters in mid-March, Stephens-Albright and other leaders already had been trying to figure out loans and programming as a collective. “We were doing that before the pandemic, but we’re doing it even more now.” The pandemic has highlighted hidden complexities or limitations within the theater world. In some cases, the project’s scientific framework has given theater professionals a way to identify those issues. 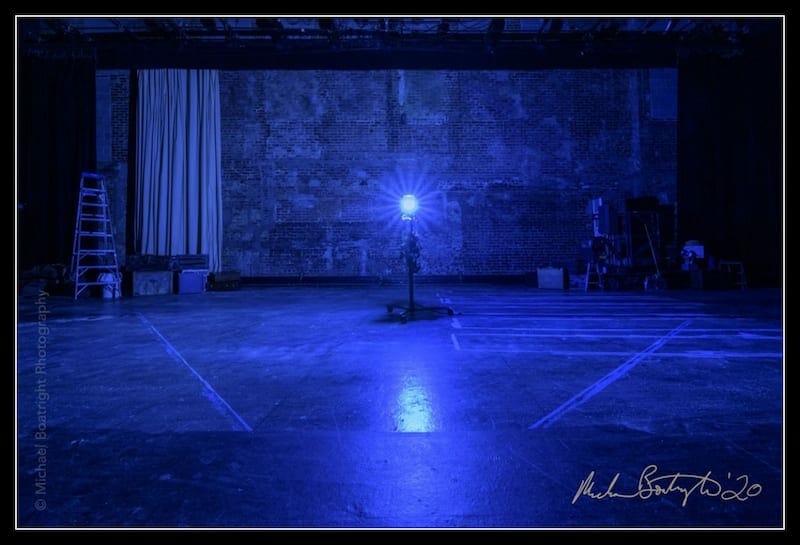 The Balzer Theatre at Herren’s, Theatrical Outfit’s 200-seat space, has been dark since mid-March like every theater in town. (Photo by Michael Boatright)

The research project at least “makes me feel good about having specific protocols, but it’s kind of moot if the environment isn’t better,” she says. One aspect the project has explored is a conflict between customer service and the need to enforce safety protocols.

“The thing that’s the least predictable is how people will react if someone’s temperature is too high or they cough or won’t answer the right questions,” Stephens-Albright says. “I’ve seen video of people losing their minds in stores because people told them that they had to wear a mask. That store is free. When you come to our theater, you paid for the show. Do we say we’re going to give the money back? People come from Alpharetta and Gwinnett County . . . do we reimburse their driving expenses? That, to me, is what is completely unpredictable.”

Baker, who has drawn upon protocols recommended by the Centers for Disease Control and the Georgia Department of Public Health, says it’s been difficult to gauge theater audiences based on geography or other demographics, simply because people attend shows from all over and the city of Atlanta and DeKalb, Fulton and Cobb counties all have different regulations.

These kinds of wild-card factors, and working within this kind of chaos, have felt eerily familiar to Morgan Clark-Youngblood, an Emory doctoral student in nursing practice and a project leader. She has a background in global public health — violence prevention, reproductive health and community development — having worked extensively with migrant populations in Honduras and Syrian refugees in Greece.

“I’ve laughed a few times at how similar the work feels,” she says, comparing her overseas work with Covid-19 and Atlanta theaters’ uncertain. “A month feels like a year, and everything changes so much from week to week. We’re creating operating procedures that are flexible since this isn’t a stagnant issue. Obviously, it’s different. In [refugee camps], you have a lot higher need, but in this situation, especially in Georgia, there are many barriers in place. I don’t feel like our country has been much support, whether it’s businesses trying to stay open or hospitals being overloaded.” 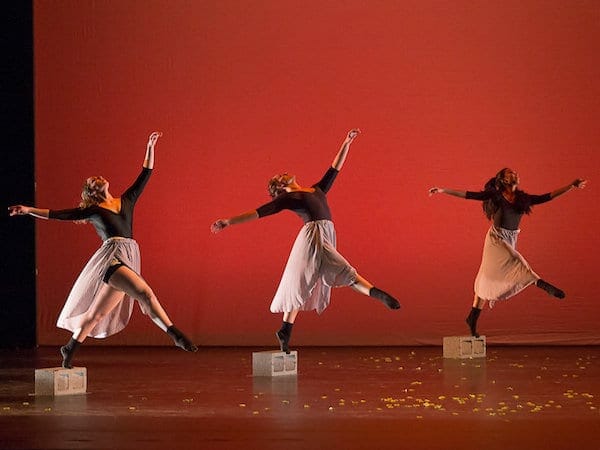 Each year the 10-year-old Dance Canvas does a series at the Ferst Center for the Arts. Its dancers also perform outdoors at such spots as Atlantic Station and the Atlanta BeltLine.

For Angela Harris, executive artistic director at Dance Canvas, this time off has forced bigger existential questions about the essential nature of the art she practices and how that may need to shift dramatically.

She’s been teaching classes over Zoom this summer and saya it’s been challenging to keep everyone on the same count — everyone heard the music differently through different speakers.

Dance Canvas did find success moving its summer program online with a dance-on-film focus and partnering with Atlanta Contemporary Art Center to stage work from the choreography residents that explores systemic injustice and racism. The performances, mostly solos and duets, will take place outdoors at the Center’s Pavilion this month and next. Plans aren’t yet firmed up, but the performances are likely to be streamed on some combination of Dance Canvas’ website and/or the Contemporary’s website and perhaps social media platforms.

Still, the question remains: How do you do the art in a safe way when it might change how that art is created in the first place?

“With dance, it is body to body, sweat to sweat,” Harris says. “I can’t wrap my head around how to bring a show we’ve already choreographed, how to do that and still maintain social distancing. Masks almost don’t matter because the dancers are so close together.” 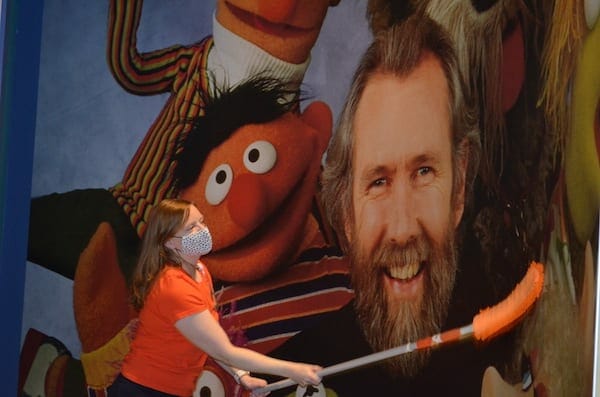 The Center for Puppetry Arts’ Jill Nash Malool, its museum director, cleans a museum wall at the Midtown theater. It continues to do shows virtually; only the museum is open to in-person visitors.

Kristin Haverty, a puppeteer and producer at the Center for Puppetry Arts, has similar concerns. “The Emory students were asking what we would be open to, and for certain changes in procedures, it was like, ‘Absolutely.’ But in a lot of ways, some of those changes would change the art. It would change the ability to tell the story.”

She also says some ingrained ideas about self-care would need to dissolve.

“There’s a huge thing in the theater that as long as you can stand, the show must go on,” Haverty says. “This was a wake-up call in terms of saying ‘No, we need a robust understudy system that supports artists.’ Of course the cost for theaters and producers will go up dramatically, but I think it’s essential to take care of yourself looking forward.”

Theaters will need to embrace change or perish, True Colors’ Stephens-Albright says.  Some plays that rely on intimate, quiet moments, presented in smaller spaces, may not happen. If the only safe recourse is having an April-to-September season performed outdoors, then that’s what she’ll do. “The runs will get shorter,” she says. “The model will change.”

Dance Canvas’ Harris says her company and the other theaters in the coalition all seem up to the task. “I mean, we’re dancers, so we are used to pivoting.”