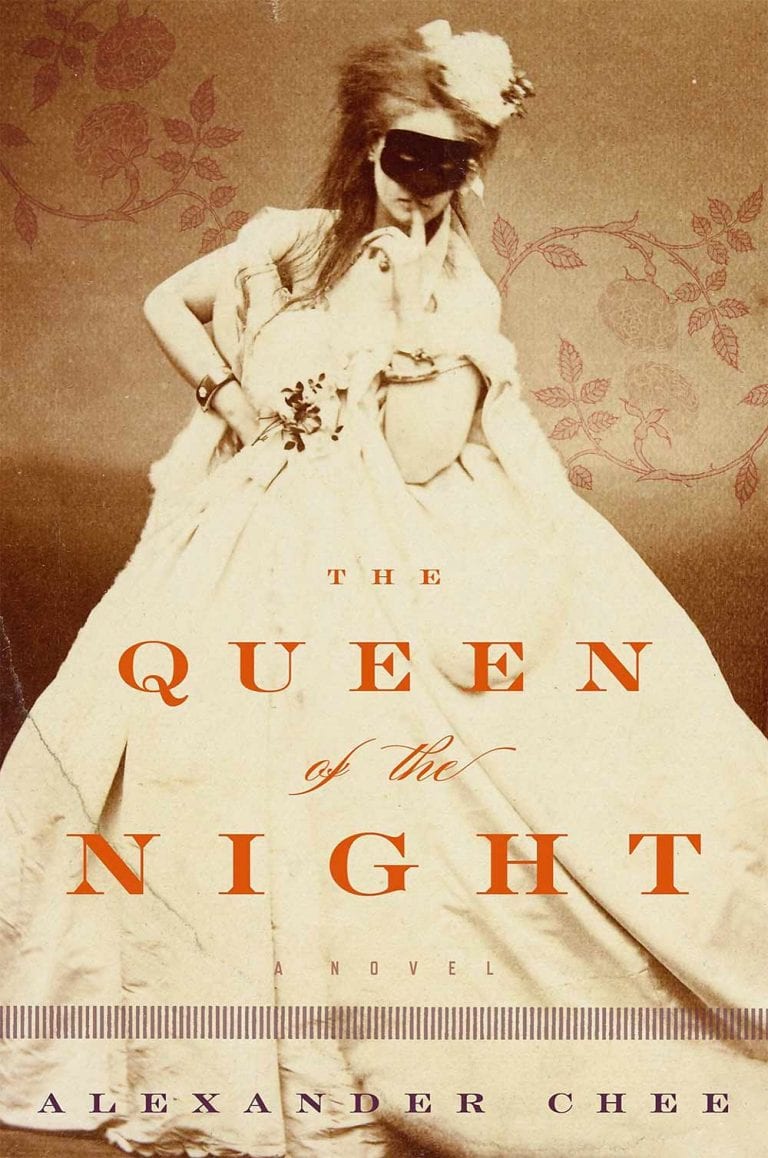 Review: “The Queen of the Night” is a novel open to imagining the historical life of women

“Men always said it that way — I’ve ruined you. I couldn’t explain, but no, I did not feel ruined.”

–The Queen of the Night, Alexander Chee

Historical fictions can, and often do, slip into a brand of nostalgia that leaves little space to conceive how life in another time might have been small, suffocated, perilous or desperate. We’d much rather have opulence, a romance with the past. The heroic simplifications present in movies like Stonewall, Dances with Wolves, The Patriot or any blockbuster about royalty are examples of easy portrayals of historical details that turn context into drama for the sake of feeling good about a collective past. These narratives mythologize and prioritize whiteness, male glory and female fragility.

What’s incredible about Alexander Chee’s second novel, The Queen of the Night, is that he gives us historic and syntactical lushness far more plentiful than water in the nearest ocean while carefully engaging with the intricate life of his late 19th-century female narrator. The I that leads us is a woman who played many different women, a woman who had to be many different people in order to survive. The I that leads us through mystery, war, celebrity and love is an opera singer, a rare Falcon soprano named Lilliet Berne, a prostitute named Jou-jou Courrèges, a traveling European circus performer called The Settler’s Daughter, a mute grisette to France’s last Empress and a starving woman collecting chestnuts with her Argentinian lover in the midst of the Siege of Paris during the Franco-Prussian War.

Chee’s novel begins at a ball, the fabled site of so much Western feminine performance, of so much Western feminine transformation. Though the party is meant to celebrate Lilliet and her voice, the setting evokes fairy tale trope when Lilliet discovers that a male stranger, a novelist named Frédéric Simonet, has “[her] fate in his hands.” All the secrets of her life have inexplicably ended up in Simonet’s novel despite the fact that he has never met Lilliet. Simonet would also like Lilliet to star in an opera featuring the same story. As the narrator says, “In an opera this moment would signal the story had begun, that the heroine’s past had come for her, intent on a review of her sins decreed by the gods.”

From here, Lilliet reverses the act of having her story taken from her by describing her life up until the point of The Queen of the Night’s beginning. She does this without significant adherence to chronological order (as theater or opera might have it) and often entangles the past with what continues to unfold in the novel’s present. This becomes a way for Lilliet to discover who exactly was responsible for giving her story to Simonet and for answering some of the questions that arise as Lilliet examines her own progression from an American orphan to blossoming opera legend.

Lilliet is born with a different name (which is rightly never revealed to the reader) on the Minnesota frontier to a Swiss mother and a Scottish father. Before watching her entire family succumb to disease, the narrator recalls being punished by her Methodist mother for finding pride and joy in singing. A ribbon is tied around her mouth so that she cannot sing or speak. “Your voice is a gift from God, and it deserves to be treated with respect — as does the Lord,” her mother instructs her. A ribbon, a small piece of beauty or velvet is meant to assist a girl in accepting her destiny of staying quiet, of staying reverent for everything but herself. “Ceci tuera cela (This will kill that),” says Simonet to Lilliet at one point, quoting Victor Hugo. This saying, “This will kill that,” is very much at the heart of how other (often well-meaning) characters react to and try to control Lilliet in every place and setting she happens upon. It would be best if she registered as a prostitute if she’s going to go to the bar in her can-can shoes, says a judge. It would be best if she married an obsessive, controlling man, only referred to as the tenor throughout the novel, who bought her out of high-end prostitution, says her best friend Euphrosyne and her beloved singing teacher Pauline. It would be best if the soprano trained this way, if she took this part, if she behaved this way rather than that way.

“This will kill that,” however, is also tied up in every fierce inch of how Lilliet continually evades efforts to turn her life into that of nameless toy or tool. At each twist and turn of the story, Lilliet is on the verge of becoming someone else. She contains as many secret doors as the famous French castles and the houses she moves through. While a prisoner in jail, Lilliet assumes the identity of her mute cellmate when she suddenly dies. While a loyal servant for Empress Eugénie, Lilliet is also a spy for the powerful Italian noblewoman and mistress to Emperor Napoleon III, the Comtesse de Castiglione. When the tenor refuses to take no for an answer over and over, in situation after situation, Lilliet finds a way to escape or a way to get through it on her terms.

The challenges before me were precise … And as I spent this time among my captors observing them, I knew there was one way to do all that I wanted, and at that moment, I saw it as clearly as the tenor’s eyes before me.

Increasingly over the course of the novel, Lilliet’s need or desperation for an alternative is relieved by pairing what she must do for her survival with her own curiosity, with her own talent, with what she loves or rightfully desires. What’s unspoken in that previous sentence: The power and sexual wants of particular men are never something the main character relies on or over-considers in difficult moments. Men do not miraculously make up for any lack in Lilliet’s actions or character. At best, they complement and respect who she is in a given moment. At their worst, men and the structures wrapped up in prioritizing them, go to insidious lengths to ignore Lilliet’s explicit requests or thoughts for the sake of what can be done with her body and her beauty.

“I do not think you understand what it is you do. This is the end of your life as a virtuous woman,” he added.

I shrugged. It was as if he had said I would never be a butterfly or any other impossible thing … Ever since I’d been old enough to know about virtue in a woman, it had seemed like a bull’s-eye painted on my head in rouge. I was sure, as I was led away, I would be better off without it.

Lilliet is often intelligently able to speak with, use or delicately sidestep men in those moments.

I fear such descriptions could make it easy to label Lilliet as “scheming” or “devious,” especially given the extraordinary drama this review can only begin to suggest exists in this book. I fear such descriptions because when I live through and inside of Lilliet’s story, when I witness what she and other women must do in the book in order to continue existing, what I feel, permeating and collapsing the theater, the dresses and the romance, is recognition. What the 19th-century woman does to simultaneously kill and preserve her life is not a safe, gentle memory or a beautiful, whimsical dream to the 21st-century woman.

This book is a place of recognition. That recognition, as well, carries and shows its reader how to make space for proliferation inside recognition. Lilliet ricochets chaotically between having nothing to possessing secrets and jewels worth incredible wealth. This flux puts her in touch with a variety of women (and gender fluid people) in different financial, professional, social and martial positions; almost all can or do serve as a model or a site of relationship for the narrator. The Comtesse de Castiglione, facilitator of international negotiations and arguably an important contributor to modern conceptions of the female selfie, creates an impression within Lilliet just as the several, different servant women she drinks gin and plays cards with do. Even the operas Lilliet studies and performs in (Carmen, Faust, La Sonnambula) provide her with equally significant, realistic reflections of who she is and who those she interacts with are. How do you fight for your life? How do those around you fight for their life? What does it do to you? To them? Do you know, do you imagine?

It’s important that this is the book that Chee has made. This could be a book where Lilliet’s suffering, where the force and captivity she faces at the hands of the tenor’s attentions, could be explicit or articulated for a contemporary audience. While that approach could have its advantages, the reader is, instead, expansively allowed to understand the dire complexity of all Lilliet’s situations through the act of being there with her as she revisits and discovers, as she openly loves and rethinks love when it doesn’t recognize her as equal. The reader is able to study and feel how the narrator refuses any trope or simplistic portrayal of a historic othered mindset. She refuses anything that doesn’t allow her to create herself. That is what the incredible bodies that precede and surround you do. They live. They forge incredible life. That is the real awe of tragedy, of story. What Lilliet must bear is wrapped up in intricate tension with what brings her joy; it reflects off her elaborate dresses and enriches her singing, but it doesn’t ever consume her. Nothing gets close to consuming her life and her persistence towards possessing awareness over its movement. Though, if it did consume her or become too much, I doubt Chee’s prose would allow us to judge her or any of the other characters she comes in contact with over the course of the novel.

The Queen of the Night is a radical act of art-making. A willingness on the part of the author to research, not only with factual intensity, but with an empathetic intensity that neither prioritizes history or the individual humans inside of it so much as it forces them to meet or collapse into each other. Quite simply, it’s a very intricate devotion to character and story, to believing in what an act of language can become.