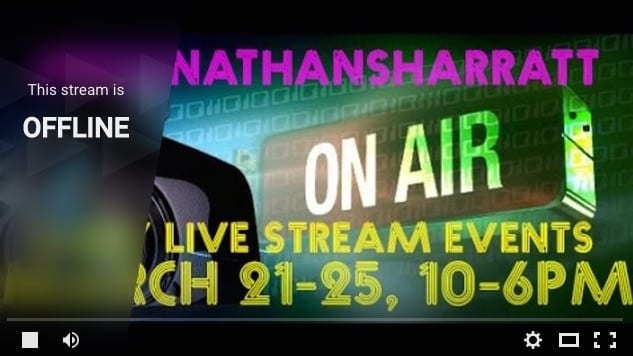 Buy Nathan Sharratt: A Requirement of the Masters of Fine Arts Degree of Georgia State University is a multifarious show focused primarily on a “curated” retail experience of appropriated merchandise and supported by three other additional concepts: a retrospective exhibit within the show itself, a live performance of the artist in his project space and the show’s own social media campaign –complete with livestream. While essentially lesser (in execution, focus and impact), these accompaniments establish the ultimate grinning ethos of the total piece. The retrospective titled Null Object as presented is composed solely of wall text — characterized by Sharratt as “of entirely non-objective didactic text” — explicating and deprecating his former works. To further sell the joke and establish a sort of heralded origin story, the exhibit is shown by regular performative docent tours that seek to represent Sharratt as a famous and important artist along with the reminder to buy art to support the institution (of Sharratt) — curiously not the institution that the artist operates within, Georgia State University. The social campaign promotes the greater goal of #buynathanansharratt, while Sharratt as the performing artist in his project space also acts as a cashier and brand ambassador.

The retail offerings of Buy Nathan Sharratt, titled “Obiekt,” are the tchotchkes of Sharratt-as-a-person, as interpreted by his artistic persona. There are objects related to his life, office supplies in reference to the University, artifacts related to his medium, clothing (including pieces actually worn by the artist) as well as “things that he likes in a fanboy-ish way”: Disney merchandise, Star Wars merchandise, Nick Cave merchandise, a tiny 3D-printed Nefertiti bust, a limited edition Coca-Cola and garden gnomes. These seem determined more by Sharratt’s shopping habits, instead of cultivating a specific experience. This rebranding of banal objects with his stamp of “Nathan Sharratt Original,” simply functions as an appropriation of what Jeff Koons’ work has been doing successfully for decades. Furthermore, when Sharratt burns his mark into the bootleg Jeff Koons balloon dog figurine, it doesn’t do much to transform the work. It simply takes a $45 piece of merchandise and price gouges it at the rate of 666 percent. In his attempt to “excavate the liminal space between the artist as a unique individual, and the artist as a branded commodity,” he fails to communicate much more than self-aggrandizement and his own business interests.

This echo chamber of appropriation and commodification through art and materials that appropriate and commodify is best demonstrated in one of Sharratt’s most favored pieces, an unverified and unrecognizable scrap of a Shepard Fairey “Obey” poster. Fairey has both been famously sued for copyright violation as well as threatened lawsuits against artists who violate the trademark of his iconic poster. Sharratt’s story is that someone had attempted to steal the wheat paste — in the tradition of taking street art off the streets for the purposes of private sale — but had failed, and when Sharratt came to it, the “Sucker was ready to pop. I took it home with me and put my logo on it through fire and thermodynamics.”

Pieces like this pale in comparison to the more thoughtful pieces like “Now there is less room to write,” a notebook with the title wryly burned through all of the pages. As Sharratt considers his viewer, he chooses to take out a portion of dreaded blank page. As you pick the notebook up and page through it, you can still smell the act — adding more than just a rehash of been-done appropriation. Here the joke lands without needing Sharratt’s performance to bring it to life.

There is some truth in Buy Nathan Sharratt that speaks to the current process of the art market, essentially luxury products that increase in value depending on fame, rarity and storytelling. Sharratt leans so heavily on these three factors to sell Buy Nathan Sharratt that he makes a bit of a caricature of it all. As Sharratt explores the artist as institution, you sense that underneath it all (and down to the full title) he apostatizes the larger institution of Georgia State University. Maybe the reason the show falls short is because he approached large, internal questions haphazardly, instead electing to make a mockery of his own plight in lieu of approaching it from an honest and thoughtful place. If you return something stolen, did you steal it in the first place?

When Pastiche Lumumba performed his rebuttal #StealNathanSharratt: A Critique of the (narcissist) artist as Institution, I was struck by Lumumba’s commitment to the reeducation of the privileged white male. His op-ed has gone viral, in the tradition of “Steal This Book” —  this has been a more successful ploy for getting the work noticed than the merit or even content of the work. Nevertheless, the statement contradicts itself in some ways. In using social media, Lumumba has succeeded in hijacking both the medium and form of Buy Nathan Sharratt to steer the conversation towards, “confronting a seemingly willing agent of their oppression.”

Sharratt announced via Facebook that the night of the opening a piece had been stolen. In the livestream video on YouTube, you can see both the theft and discovery occur in the 32-minute span before the end of the show. (The livestream has since been made private.) The next day, Lumumba professed in his statement, “I took one of the pieces. I did not take the piece because I thought it was beautiful or clever and wanted it. I did not destroy anything or make a distracting scene. I performed a silent act of institutional critique.”

#StealNathanSharratt primarily is concerned about the inclusion of a small Nefertiti copy titled “It’s Important to Own History,” Sharratt’s use of the language “neoliberal patriarchy” in his artist statement and the phrase “Make America Nate Again” in the style of Donald Trump’s “Make America Great Again.” In addition, Lumumba found fault in Sharratt’s co-opting of the High Museum Director Rand Suffolk’s statement about Mark Bradford and appropriating that statement for the promotion for his thesis show. It should be noted that in Sharratt’s promotional piece, Suffolk’s words were immediately followed by the clarification, “edited by the Artist [sic] to appear as if he wrote it about him and not someone else.”

As protest, Lumumba took a small vinylmation figure. As a stylistic statement, wouldn’t it have made more sense to take the bust of Nefertiti and in doing so, both literally and physically reclaiming the object that had been so intentionally “reactivated” by Iraqi artist Nora Al-Badri and German artist Jan Nikolai Nelles? To make his case, was it necessary to take the work out of the gallery? Does his opinion mean less if it’s not accompanied by theft/protest? Interestingly enough, #StealNathanSharratt discusses the art in the exhibition much less than it unpacks the problematic source materials. For example, Lumumba fails to mention how Sharratt shrinks the beautiful iconic Nefertiti bust, the singular female representation in the show (save a high-heel tape dispenser) and in addition to his adding his logo, added flashing, the excess material from the mold making process that is typically removed. Yet, this piece was 3-D printed and wasn’t made in a mold.

As a piece of social media art, Lumumba created something that was more effective than Sharratt’s campaign and is going viral, but does that make it any good? To some degree, he’s reinforcing some of his arguments, “By writing about his work and publishing it in an arts publication, I would be essentially contributing to the propaganda machine that he initially set out to achieve because there’s no such thing as bad press.” Does releasing this statement in a more “democratic” forum such as Facebook, make that much more of a difference? By Sharratt’s standards, as defined in his Docent Tour FAQ, #StealNathanSharratt furthers his own purpose. Sharratt encourages his docents to, “Try to engage them [the audience] in dialog about the themes being presented in the exhibition, or issues you find important related to the exhibition, such as commercialism, institutionalism, repressive desublimation, Donald Trump, labor.”

There are slight inconsistencies that bother me. For example, you can seen in the livestream that Sharratt quickly discovers Lumumba’s intervention, yet he posted his passive-aggressive threat to press charges to his Facebook page instead of contacting his studio assistant directly. Perhaps it is indicative of our relationship with the dishonesty of social media and viral stunts that casts a suspicious pall over the whole affair. In Lumumba’s relationship as Sharratt’s studio assistant, and Sharratt’s use of social medium as an art form, one possible explanation is that this performance of institutional critique could have been arranged prior to the show. In the comments to #StealNathanSharratt, Lumumba maintains, “This was not part of his show. Please do not give him credit for any of my critique.”

The notion that this was a conspiracy is sheer conjecture. Regardless, even if it were a separate act — by absconding with the piece as an act of response, the act itself became part of the show. As a result, the combined acts make for a greater artistic statement than either of the two ever could make separately as a catalyst for a larger conversation about cultural appropriation, institutional memory and commercialism.