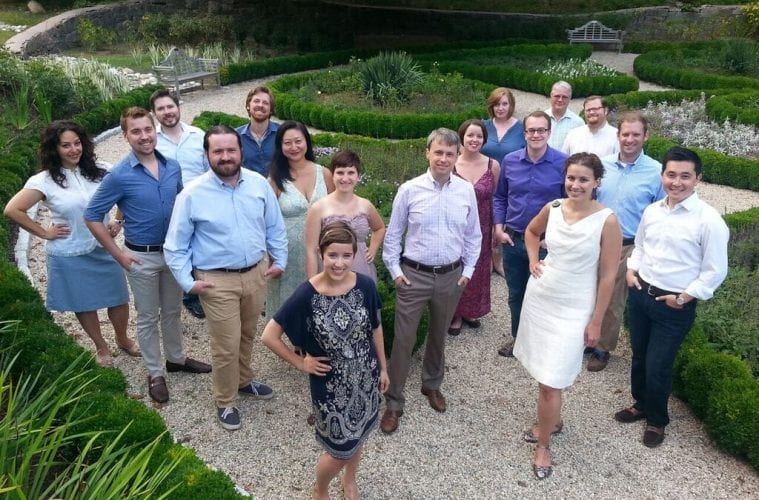 Skylark will make its Spivey Hall debut in May. (Photo by Carolyn Guard)

Five years ago music lover and businessman Matthew Guard founded the a cappella vocal ensemble Skylark on a wing and a prayer. His intention was to get back to the music that had so inspired him during his college days at Harvard as music director of its oldest a cappella group, the Harvard Krokodiloes.

Dusting off his baton, Guard embarked on an experiment of sorts and invited some of his singer friends for a weekend of rehearsing and performing. The group reassembled six months later for another project and has now evolved from fledgling ensemble to a group of 16 professional singers, based in both Atlanta and Boston. The group now gathers for six projects a year and will make its Spivey Hall debut performing Sergei Rachmaninoff’s “All-Night Vigil” on May 21.

ArtsATL recently caught up with Matthew Guard to talk about his new album.

ArtsATL: What was your initial inspiration for Crossing Over?

Matthew Guard: It is incredibly important to me that our concerts and recordings communicate something unique. I believe that music has the potential to illuminate and reveal things that are difficult to capture in verbal or written communication. When we started talking about the first collaboration between Skylark and Sono Luminus, we were all drawn by the desire to capture the unique beauty of Skylark’s sound, and to create an album that was truly an artistic concept as opposed to just an assembly of pieces.

We started our list with a few pieces that capture Skylark’s sound, which one might describe as “shimmery beauty, with a direct connection to the heart.” After agreeing on John Tavener’s “Butterfly Dreams,” Nicolai Kedrov’s “Our Father,” and Jon Leifs’ “Requiem,” the album concept essentially emerged naturally. Here were three pieces that all seemed to embody a state that one might call “end of life visions and meditations.” ArtsATL: Crossing Over features selections about the end of life and life beyond death. Why that theme?

Guard: I have always been fascinated to hear that people who have had near-death experiences describe vivid images of what they saw and felt as they approached what could have been the end of mortal life. We may go through a similar experience as we prepare to leave this world for what, if anything, lies beyond. The pieces we have assembled on this album are a musical narrative on what that experience could be for each of us.

ArtsATL: You have programmed the work of two Icelandic composers on this album, Anna Thorvaldsdottir and Jon Leifs. How did you discover this repertoire and what drew you to it?

Guard: I had actually never heard of Jon Leifs until I was talking to Collin Rae, CEO of Sono Luminus, about the album concept. Collin has strong connections to the Icelandic music community, and this piece was one that he had been told about by his friends and and had hoped to find an opportunity to introduce to a broader audience.

I did some research on Leifs and his “Requiem” and found it incredibly moving. To many, Leifs is seen as the father of Icelandic classical music, a discipline that really didn’t exist in wide form until the middle of the 20h century. Most of his orchestral music is quite tempestuous — a musical reflection of the extreme nature of Iceland’s climate and geography (with pieces inspired by volcanoes, for example), His “Requiem” is an anomaly — it is ethereal and beautiful, but with an aching sense of grief brought on by a personal tragedy. Leifs composed the piece after her daughter tragically drowned off the coast of Norway before her 18th birthday.

Once we settled on the Leifs, the Thorvaldsdottir piece emerged as a natural complement. She is a direct musical descendant of Leifs’ tradition, and is incredibly respected for her orchestral compositions (she was recently selected by the New York Philharmonic as their Kravis Emerging Composer). Her piece on the album is also a departure from her dominant compositional idiom — it is a remarkably soothing piece that I imagine as the sound of souls ascending to a place that may lie beyond.

ArtsATL: Could you talk a little bit about the recording process for Crossing Over? Why was it recorded at the Church of the Redeemer in Chestnuthill, Massachusetts?

Guard: It was a magical week. We chose the church because it has absolutely gorgeous acoustics for a group our size. The team at Sono Luminus is committed to making gorgeous recordings that accurately capture the music with an absolute minimum of post-production or artificial tinkering. So it was critical to find a space that would provide the perfect amount of natural reinforcement for the choir without adding any artificial reverberation effects. Then, they were absolutely committed to doing any “mixing” of the recording simply by achieving the perfect standing position around the microphones to allow each voice to be heard. You would be surprised how much difference it can make for one person to step two inches back from the microphones.

It was also really fascinating because we were not making just a typical recording — we recorded the album in 3-D surround sound (for release on Blu-ray audio). The surround recording is profound not only because of the technical engineering that nearly perfectly replicates the acoustic of the church, but also because of the painstaking level of artistic care taken to ensure that each piece was performed in a formation that made artistic sense in the narrative of the album. Some of the simplest and most beautiful pieces are performed with the group standing in a circle around the microphones, essentially embracing the listener from all sides, while some of the more emotionally difficult moments are recorded with a sharper directional perspective, which only heightens the impact of the music.