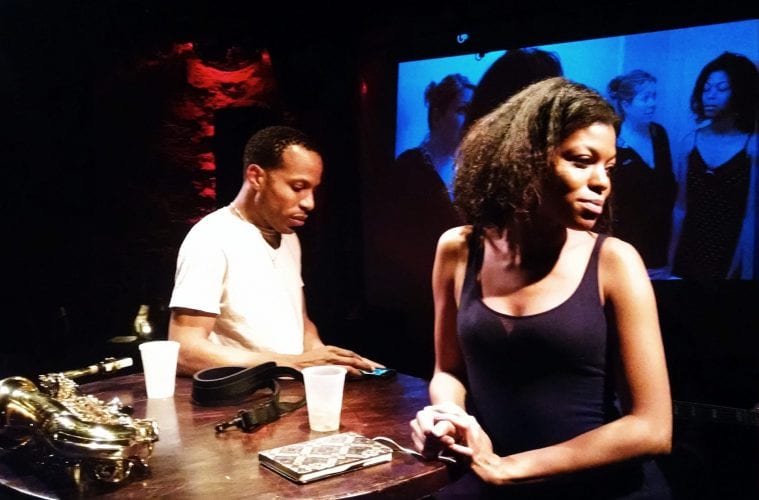 "Intersection of Dreams" is set in a slow and sexy speakeasy.

Review: PushPush’s “Intersection of Dreams” goes down like soft jazz with a smooth whiskey

The characters in PushPush Theater’s new show Intersection of Dreams, running through April 5, are habitués at a cool, jazzy, speakeasy basement nightclub, the kind you’ve always wanted to visit incognito while listening to a late-night jam session and knocking back a tall glass of whiskey. Happily, the production itself is set in a cool, jazzy speakeasy basement nightclub, the actors are also talented musicians who provide a fitting soundtrack and you can quite literally knock back a glass of whiskey or whatever else you like from the bar as the action unfolds around you.

Intersection of Dreams by Rory Sullivan is a new production inventively staged at a downstairs bar on Edgewood Avenue. The story focuses on a love triangle — or square, really, there are four characters — primarily centering on Angela, appealingly played by actress and jazz vocalist Brenda Nicole Moorer.

Angela has been conducting a love affair with gambler (and fine sax player) Roger (Eugene H. Russell IV). As we discover through a series of conversations and from short films that are occasionally projected on a screen behind them, she and Roger began the passionate affair during a stint when he tried to put aside his one true love: cards. He’s picked them back up again, and there are a number of complicating factors; Angela has also had an illicit affair with Robert (Robin Bloodworth) the husband of her sister Melanie (Jennifer Bates).

Overall the show and its setting are pretty appealing. There are finely written scenes and segments, such as Roger’s monologue about his cynical and persistent vision of all the people in the world as cards with various ranks. But as with many experimental works, it’s high on invention and atmosphere, low on narrative power. We often don’t feel we’re watching interesting events unfold, but that we’re learning more and more about an intense but basically static situation, one in which the major developments and choices have already been made.

There are many dreams recounted, and there’s even seemingly the implication that some of the events we see unfold or hear narrated may themselves be dreams, which is always an interesting narrative strategy but always a problematic one, as well; it’s harder to care about fictional dreams than it is to care about fictional people.

The cast also acknowledges the presence of the audience (there’s thankfully no audience participation or the like) by turning and speaking to them, a distracting element that takes us out of the story and never lets us enjoy the theatrical sense of being invisible.

The overall atmosphere of stasis isn’t helped by frequent and multiple short intermissions (I believe there were three or more, but I sort of lost count; there was, as I mentioned, a drink involved). Food is served during these intermissions for those who choose to have it. I’m a fan of having a drink during a show, and though the dishes I was lucky enough to sample were tasty, I’m still not a fan of food attending. It interrupts and disrupts in ways that an innocent little drink never does.

Still, in spite of the faults, for those who long to duck away to a dark corner, drink deep and hear the sax moan while people speak of haunting dreams and lost love, the inventive and sexy Intersection of Dreams will certainly fit the bill.