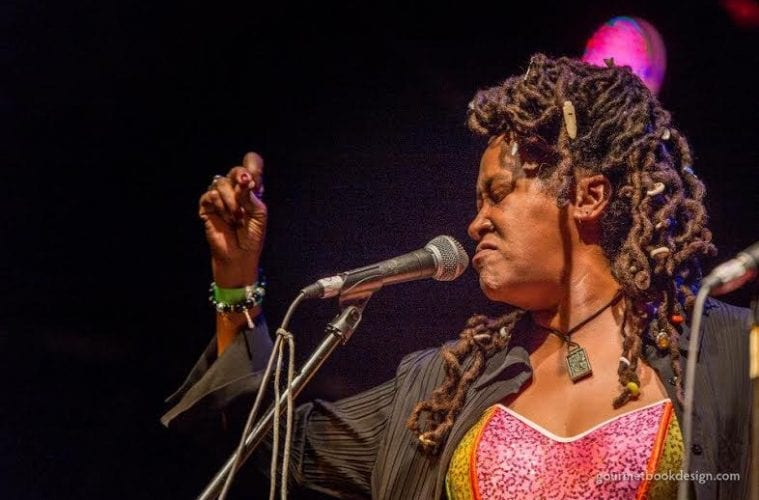 Fourteen years ago, Theresa Davis shared her final conversation with her father, Charles “Jikki” Riley. The time preceding it was an unhappy period for Davis. She wasn’t living up to her creative potential and both she and her father knew it. Riley’s words would serve as the turning point in her career as a poet. “Stop trying to disappear,” he told her, “I can see you.”

As a child of poets and activists, Davis has long been immersed in the art world. Her father, also a musician, was a member of the Black Panther Party. Her mother is longtime Atlanta poet and playwright Alice Lovelace. Her siblings share talents in writing, teaching, performance art and juvenile justice. “Family nights at our house were very, very interesting,” says Davis. “There’s never been a Thanksgiving dinner or family gathering where a talent show was not involved.” Both parents would call on her to compose poetry for rallies and community events. Despite that, Davis was mostly a “closet poet” who resisted writing when she was younger. Ultimately, she found catharsis in putting pen to paper as a teenager and embraced her family legacy.

After their last conversation, Davis’ father suffered a massive stroke and was taken off life support. Davis decided to make herself visible again and returned to writing. She shared her work at open-mic nights, often at Java Monkey, the Decatur coffee shop and poetry hub. During this time, she met future friend and roommate Karen G, who introduced her to poetry slams.

Davis took to slams right away. They appealed to her competitive nature and didn’t take offense when scores came in lower than she’d prefer. For three years she participated at a strictly local level, until traveling to Albuquerque, New Mexico, for her first national slam. The spirit and passion of the work resonated with her. “I went through all the emotions,” says Davis. “From ‘Everything I write is crap!’ to ‘This is so amazing and I can do this too!’” She made good on her promise to herself and, in 2011, won the Women of the World Poetry Slam competition Brooklyn. Atlanta then honored her with a proclamation: May 22, Theresa Davis Day.

Everything seemed to be going but she noticed a major flaw with slams in general: Women and people of color were severely underrepresented, on teams and at national events. “You would see some finals and you would not see a woman onstage all night,” Davis says. As a result, she and Karen G created Art Amok, a monthly slam and open mic. They aimed to provide as open a space as possible for often discounted voices. “Not only women’s voices,” Davis says, “but people of color, trans people. When we said we were open, we were open to anything.”

People in the community responded and their space flourished. The tide eventually turned on a larger scale as well. The Art Amok crew was the first all-lesbian team to go to the National Poetry Slam. After eight years, Davis says, “Finally, you’re starting to see the diversity this art form calls for.”

Though the subject matter of slam pieces is often emotionally weighted, Davis says no one takes themselves too seriously at Art Amok. “We’ll have a sock puppet slam. We’ll do Slam: The Musical, where you have to sing your poems.” Davis reiterates, “We do slam, but we like to still have fun with our work and with our creativity.”

Her sometimes silly approach is useful when teaching youth poetry classes at schools and Boys & Girls Clubs. Davis believes a creative outlet is necessary for kids to find their voice in a world that often seeks to silence them. “As a black woman, my voice is squashed a lot,” Davis says. “But, as a person who recognizes I have a voice, I also recognize that there are other people who don’t know they have a voice.”

Room for expression combined with a creative skill, Davis says, like poetry, has a grounding effect. “If they start early, I think by the time they get older, it’s natural for them to have that voice.” Many instructors warn Davis to expect a period of adjustment when she’s introduced to a new group, only to find that students open up and connect with her very easily. “Kids can smell BS just like people in the world can,” she says. “They can feel intent.”

That vulnerability, in her estimation, is the strongest tether between her work and other people. Davis freely admits, “I’m not afraid to talk about the hard things.” She seeks common ground with listeners by relying on the genuineness of personal experiences. The end result is, hopefully, a connection that opens the doors of communication. “We have this moment where our stories have bumped into each other,” Davis says, “and now we can have a conversation.”

Her newest attempt at conversation is her forthcoming book from Sibling Rivalry Press, Drowned: A Mermaid’s Manifesto. The book 2.5 years in the making, follows her battle with depression, privately and in spaces where women, particularly women of color, are expected to put on happy faces.

Depression can be a tricky subject, but Davis says she thinks she addresses it with the right mix of intensity and comedy. “I know people like to laugh more than they like to cry. I have a way of working in hard things and wrapping it in humor.” The hope for Drowned is to find an arch, making it more book than collection. Whether that happens will require help from an outsider who isn’t as close to the work. “So much of it is from that heart place,” she says, “I stay connected and I hope I always stay connected. I never want to get too far away from my words.”

Drowned may also hold the potential for a one-woman show, just one more thing on Davis’ long list of future endeavors, along with the publication of a young adult novel which focuses on coming out and the supportive role an art community plays in the process. In the meantime, Davis says she’ll continue to work with groups like Positive Impact, with health centers focusing on HIV support services, as well as maintaining her role as poetry outreach coordinator at Georgia Tech’s Poetry at Tech.

When it comes to Atlanta’s literary community, Davis hopes performers will continue to step outside their comfort zones and create a vast, diverse scene. “If you’re only comfortable being a big fish in your own pond, that’s a scary fish . . . at some point, you just become extinct in your own space, you know?”

As for her personal quest for visibility, Davis’ piece and letter to her father “Lost,” says it all: “Being happy, family, love, being visible and present in my life is key. Something I’d lost sight of once. I will never do that shit again.”