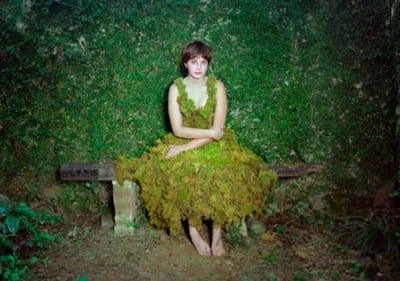 Portraiture seems to be in the air this fall. Elegant examples by Titian and Veronese are on view at the High Museum; Chris Verene’s chronicles of the residents of Galesburg, Illinois, can be seen at Marcia Wood Gallery; Jaimie Warren’s snapshots capturing outrageous behavior of friends and family are on display at the Atlanta Contemporary Art Center; and Gary Gruby’s elegant black-and-white “found” portraits are on view at Pace Academy. One of the best shows, however, is a gently subversive exhibition that melds all these approaches in a fascinating way: “POST-her: contemporary portraiture of women,” at Jackson Fine Art’s Project Space.

For this creative and intelligently assembled show, curators Angela West and Anna Walker Skillman invited a group of local artists to produce portraits of women that return to the traditional compositional style of a single sitter, facing the viewer, highlighting the sitter’s beauty and stature. They selected 19 images from those submitted, but, contrary to the preciousness of the traditional portrait, they reproduced them as 24-by-36-inch unlimited-edition posters that are being sold for just $50 each.

West and Skillman knew they wanted to make work by contemporary Atlanta artists accessible to as many people as possible. What they in fact produced is a fascinating study around the idea of portraiture.

Bob Butler and Forest McMullin both took a historically formal photographic approach, but their results have a very different feeling. Butler’s gorgeous portrait is a close-up of a woman dressed, styled and lit as if a model posing for the cover of Vogue. McMullin’s portrait is much cheekier. His sitter is in a traditional seated pose, with her body at a 45-degree angle from the viewer, but rather than wearing an elegant gown, she wears a leather bustier, cinched tightly to accentuate an expanse of cleavage, not unlike many portraits of the past.

Sarah Hobbs also looks to the past, but she focuses on the model of early photographers’ self-portraits. Sitting primly with her back straight and tall, everything feels in perfect order with the exception of a white swath (could it be toilet paper?) running from under her shoe. Is it a joke, or perhaps a nod to the time when photographers used props to disguise the shutter-release cable needed to take their own picture?

Nancy Floyd is much more self-referential. Posed aiming a pistol at some off-screen target, her self-portrait is a reference to her recent body of photographs about women and guns. Sheila Pree Bright revived an older but still compelling image in which she questions the notion of beauty by digitally melding elements of her own face with that of a black Barbie doll. Cropping and presentation vary as well. Sarah Dorio offers three slightly different portraits of the same woman, stacked one on top of the other, as if they came out of an old-fashioned photo booth. Jodie Fausett’s image of a woman (left) caught in mid-motion flipping her hair fades to black in the corners, as if taken with a pinhole camera. Dorothy O’Connor created one of her meticulous tableaux vivants (top photo) in which a young woman wearing a dress of moss sits in front of a garden wall covered with creeping vines.

The curators added extra depth to the show by including a few artists not based in the photographic medium. Ann-Marie Manker’s and Shana Robbins’ mesmerizing drawings rival their photographic counterparts in the detail and emotion in their subjects’ faces. Katherine Taylor painted a beautiful watercolor based on Botticelli’s 1482 masterpiece “The Birth of Venus,” and Suellen Parker submitted one of her eerily lifelike clay figures that she digitally superimposed with human eyes.

Equally important to the show is its democratic nature. Each image is the same size, the same $50 price and available in unlimited quantities — but only for two weeks. After October 31 no more orders will be taken, and the artists, who each had to pony up the same amount for production costs, will share equally in any profits.

Clearly this show is about making affordable work available to the public and about creating a sense of community among the Atlanta-based participants. The bonus is what an intelligent show it turned out to be. To see this can-do kind of idea and spirit coming from a commercial gallery and an established artist (West, who did not participate herself) is heartwarming indeed.

To view the posters and for information on purchasing, visit the gallery’s Facebook page or email courtney@jacksonfineart.com.