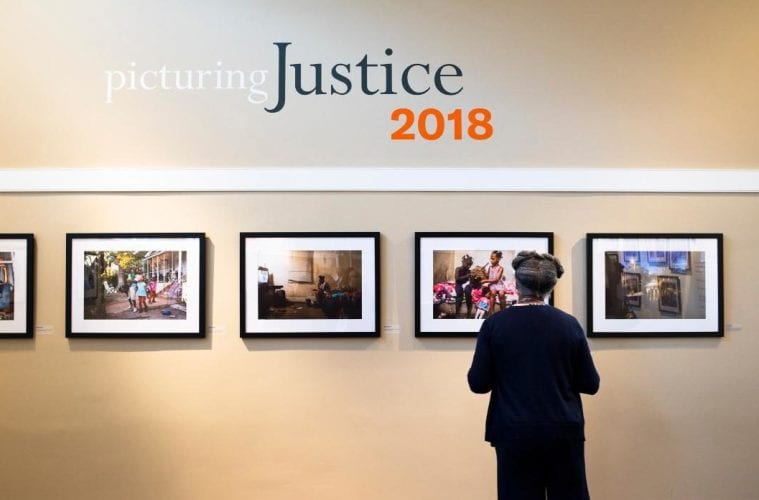 Picturing Justice, a standout exhibition among this year’s Atlanta Celebrates Photography events, showcases the work of six photographers that highlight social justice issues. Currently on view at the Atlanta Legal Aid Society offices through October 30, the annual exhibition, now in its third year, began with an initial idea by Bill Boling, a lawyer, photographer and publisher at art book company Fall Line Press. It took shape with the vision of art consultant and curator Mary Stanley.

In 2015, Boling was invited to tour the new headquarters of the Atlanta Legal Aid Society, a nonprofit with the mission of offering free civil legal services to low income people. Enthralled by the beauty of the historic building on Ellis Street and the organization’s fifth-floor space with its 22-foot ceilings, Boling suggested using the space for art exhibitions as a way to give visual identity to abstract legal cases and to help leverage financial support for the organization’s charitable work. 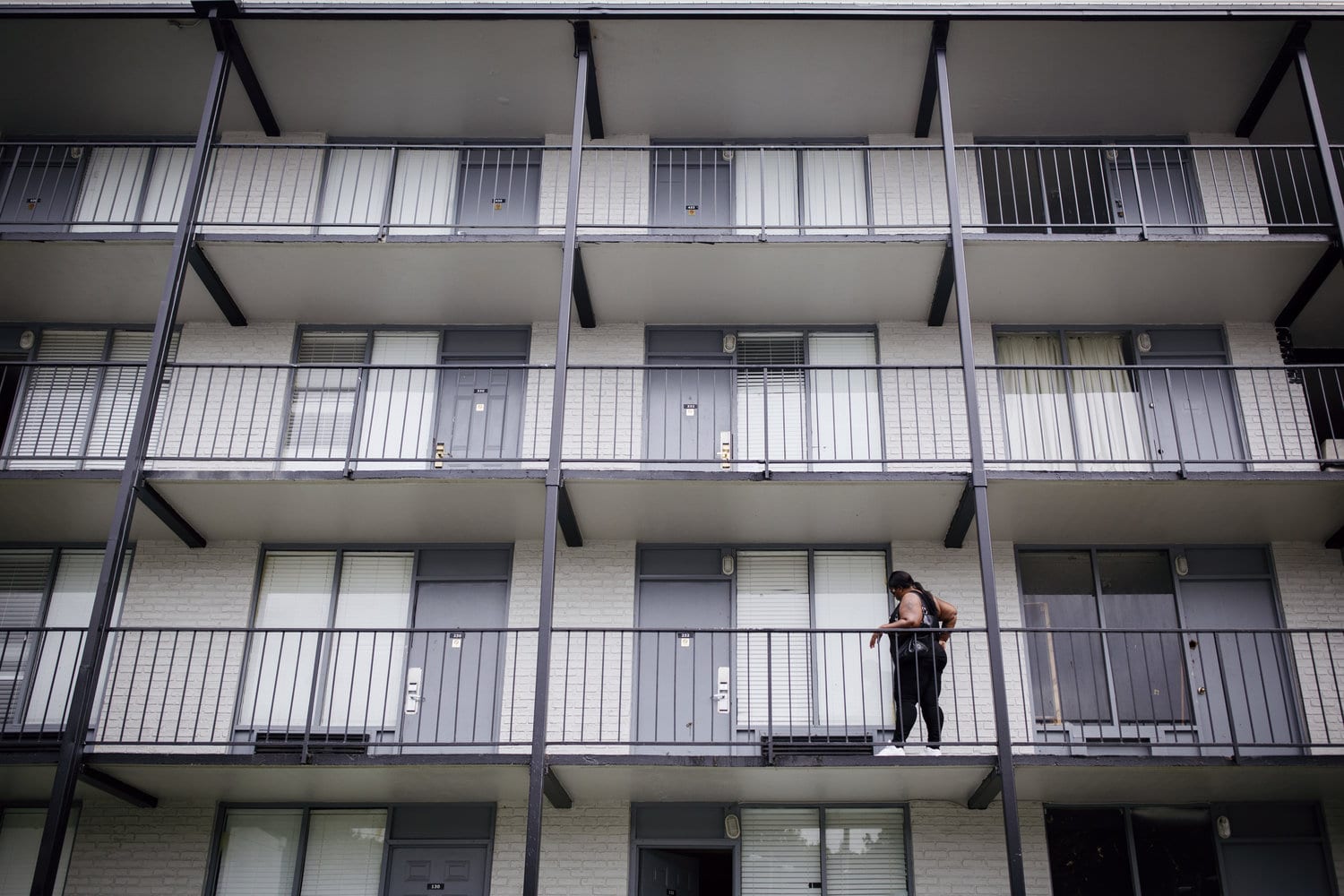 Atlanta photographer Melissa Golden captured this image of Angela Woodman in Decatur in August of 2018. The housing authority terminated Woodman’s housing voucher and forced her and her eight children out of their home. (Courtesy the artist/The Bitter Southerner)

With the collaboration of Atlanta Celebrates Photography and the Bitter Southerner, the Legal Aid Society this year commissioned Atlanta-based photographer Melissa Golden and writer Robin McDonald. They embedded the pair with Jessica Felfoldi, one of their 68 attorneys, as she went about her work on several cases, including helping a 99-year-old woman who was threatened to be evicted and a family waiting for home assistance to take care of their autistic son. Collectively, the six stories and sets of images provide a deeper understanding of the challenges that these individuals face, as well as the importance of Legal Aid’s work. Golden’s photographs succeed in capturing the emotions of people at vulnerable times in their lives while still portraying them with dignity. 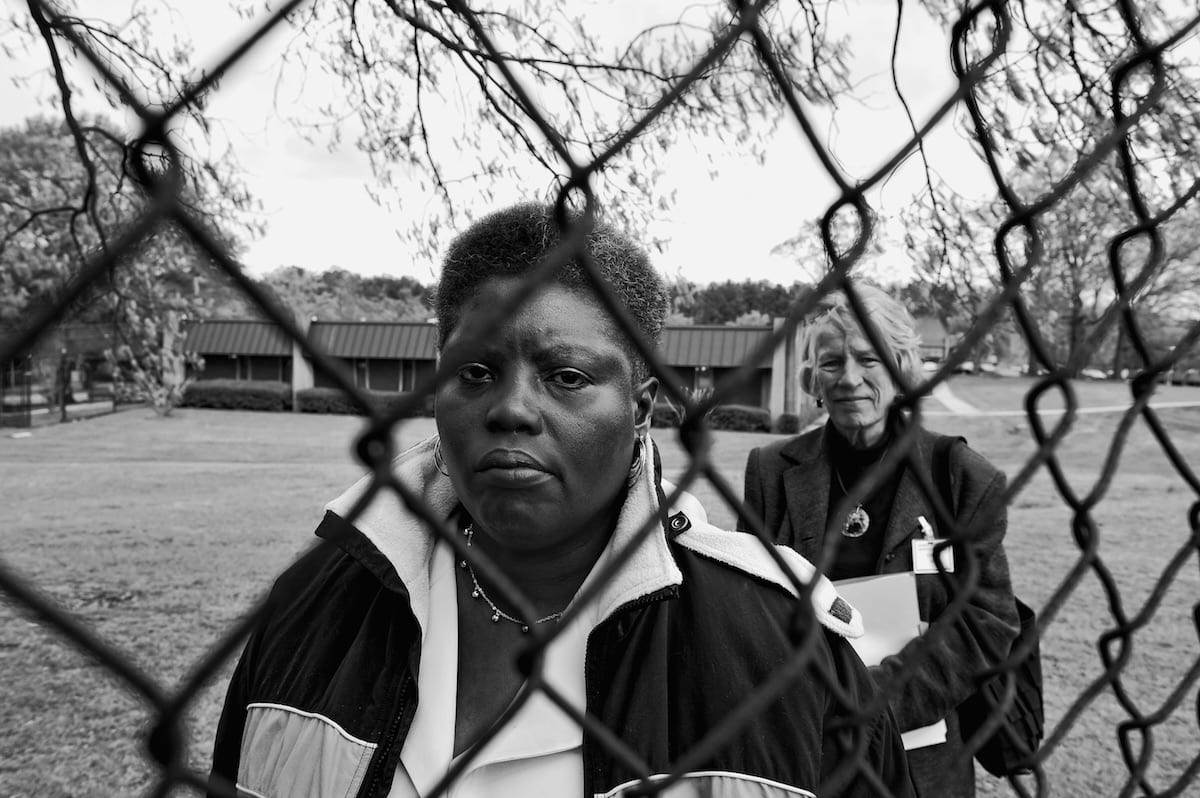 Photographer Robin Rayne captured this image of Lois Curtis at Georgia Regional Hospital where she was forced to live for decades. Behind her is Susan Jamieson, the Atlanta Legal Aid attorney who represented her case to the Supreme Court.

Apart from the commissioned work, five other photographers were selected by curator Mary Stanley for the exhibition. Two images by Atlanta photographer Robin Rayne feature Lois Curtis, one of two women with developmental disabilities who were central to the U.S. Supreme Court “Olmstead” decision back in 1999. Legal Aid was instrumental in winning this landmark case, which made it possible for mentally disabled persons to live in their communities rather than state mental hospitals. 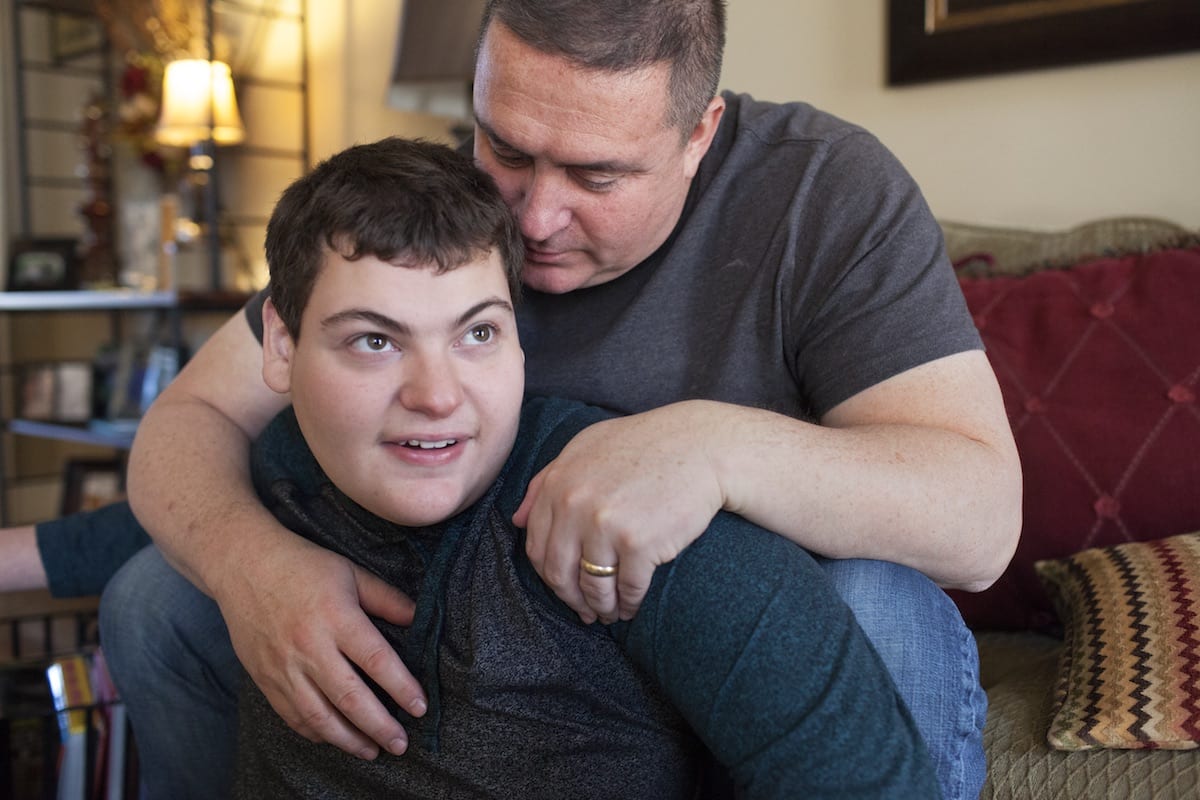 Decatur-based photographer Beate Sass has dedicated much of her photographic work to depicting people living with disabilities. She shows a series of sensitive portraits of individuals whose quality of life often depends on support from family and friends but also the Medicaid waiver. (She spoke with ArtsATL about her work in an interview in 2016.) 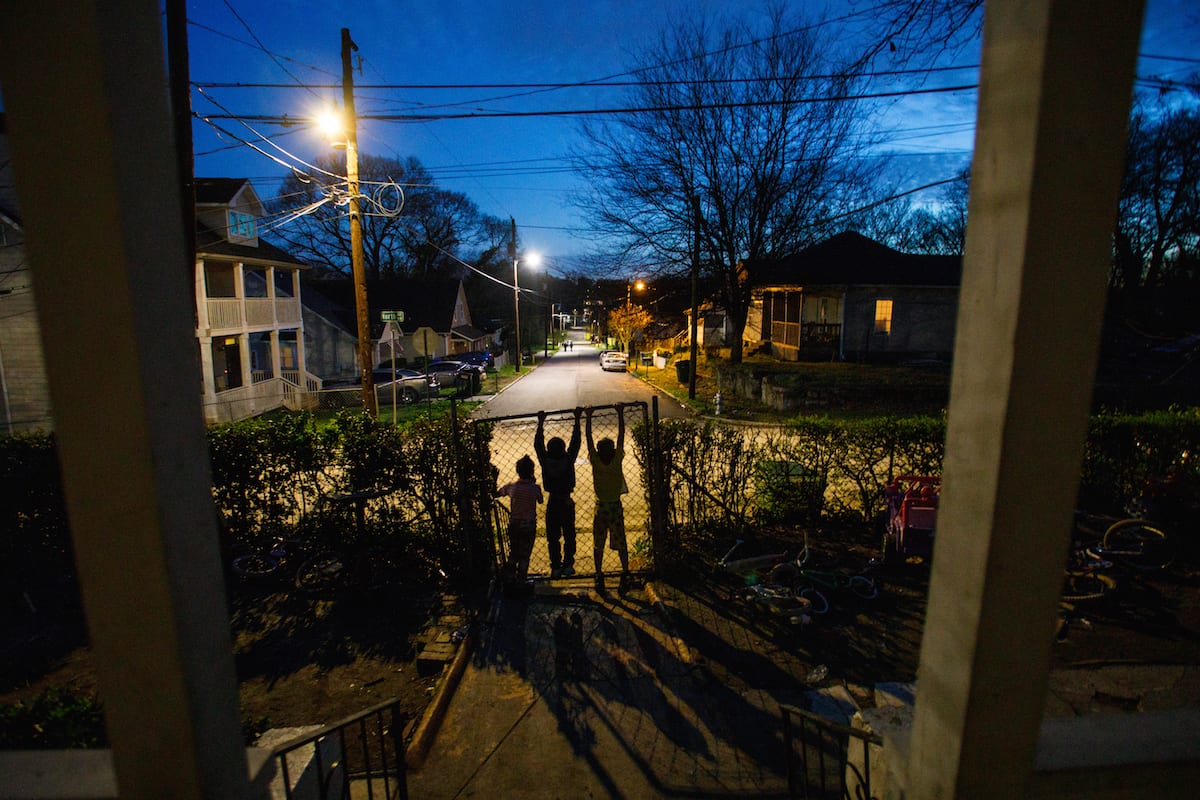 In Dustin Chambers’ 2018 image, three of Chiliquila Ogletree’s grandchildren hang on their front gate and look out over Sunset Avenue, the street where Dr. Martin Luther King, Jr., lived in the final years of his life.

Also featured is Dustin Chambers’ long-term project documenting the lives of underrepresented communities on the west side of Atlanta, especially those affected by the rapid gentrification of neighborhoods around the new Mercedes-Benz stadium and the BeltLine. Stanley selected photographs from his series at its outset for the first Picturing Justice in 2016 and this year shows five of his photographs that bring to light the life of U.S. Army veteran Chiliquila Ogletree and her family in their English Avenue home. 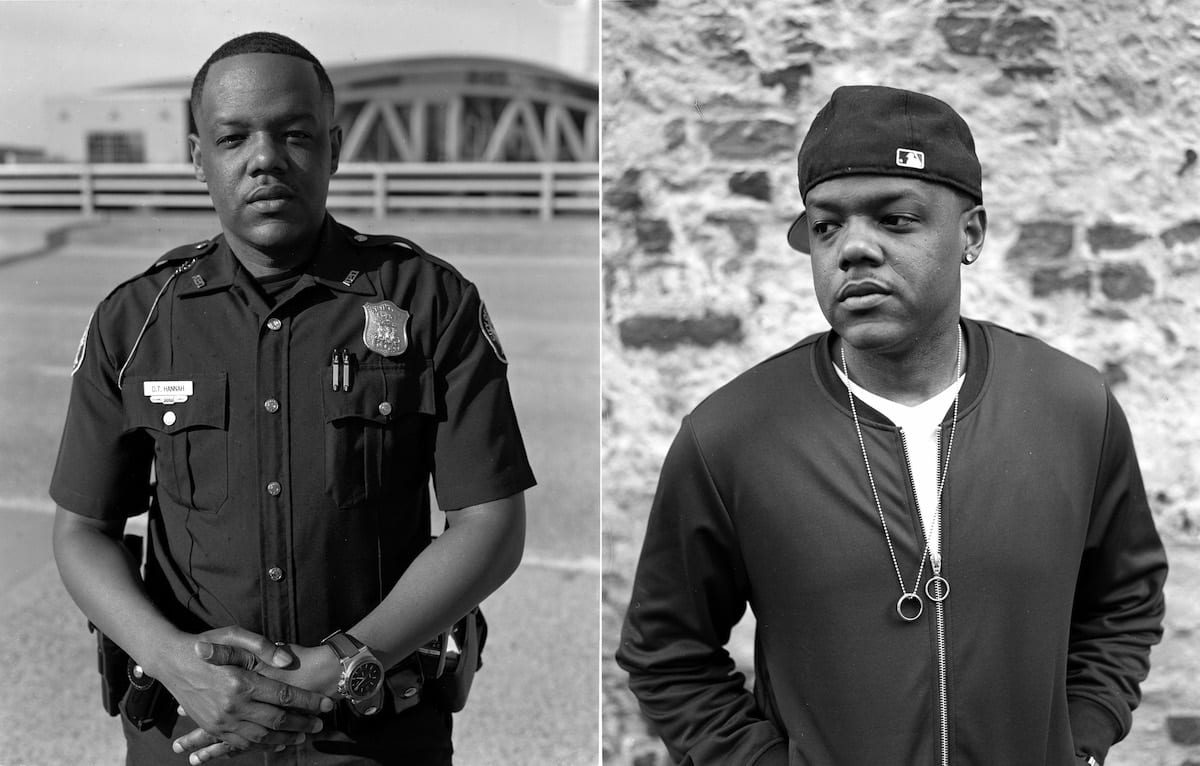 Artist Daniel Edwards photographs black officers in and out of uniform as in this 2017 diptych titled Badge #6675.

Daniel Edwards’ work stands in contrast with the photojournalistic vein of the exhibition. His black and white diptychs portray black officers of the Atlanta Police Department both in their uniforms and in their street clothes. With a background in sociology, Edwards uses photography to explore social issues, and in this conceptual series, he thoughtfully challenges perceptions of law enforcement in the age of the Black Lives Matter movement. 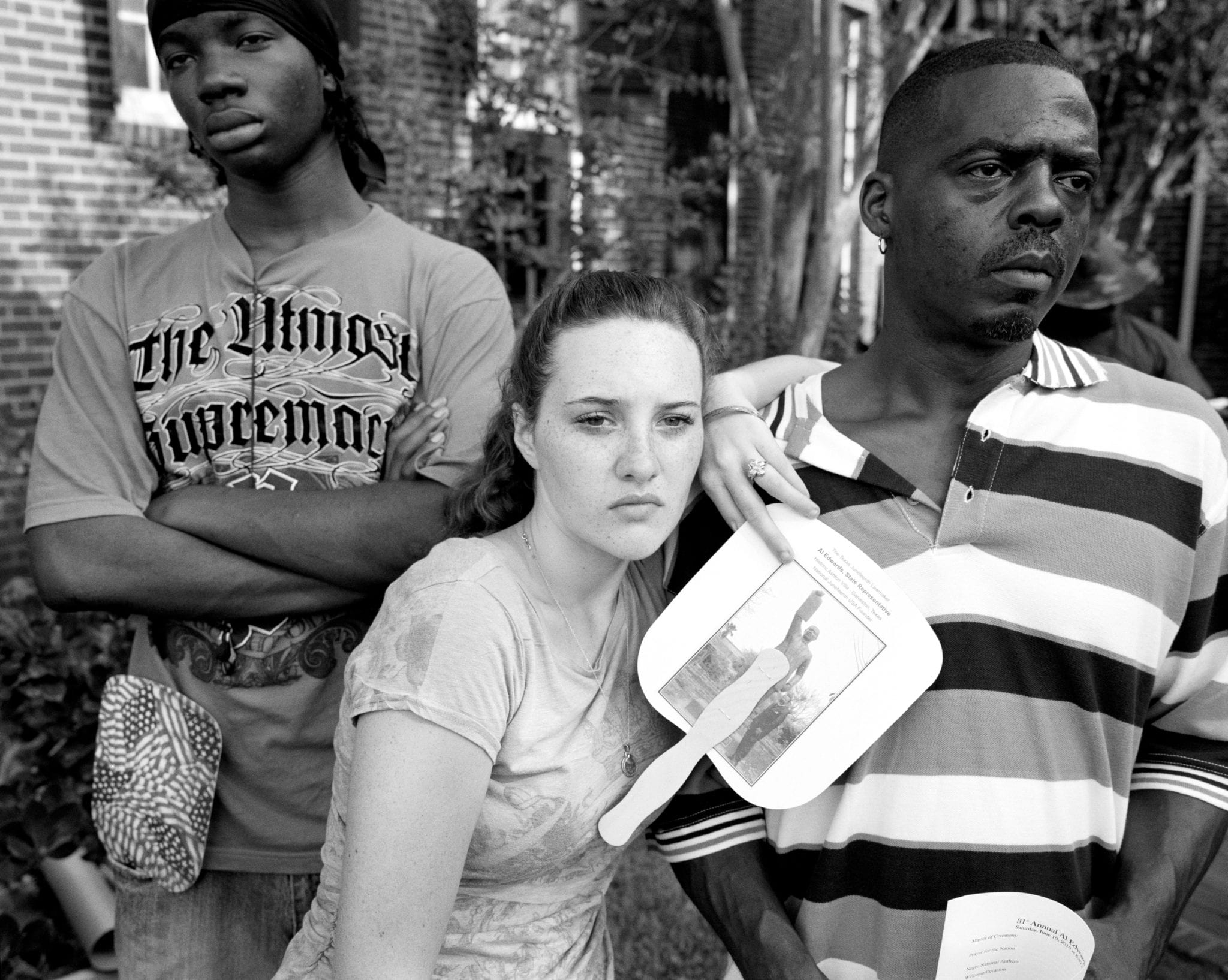 In Andrew Lichtenstein’s 2010 image, residents of Galveston, Texas, listen to a reading of the Emancipation Proclamation as part of Juneteenth celebrations.

Closing the exhibition are three beautiful black and white photographs by Andrew Lichtenstein, a native of New York City. Particularly mesmerizing is his picture of a young white woman, facing the camera, along with two other black men in Galveston, Texas, as they listen to a reading of the Emancipation Proclamation during the Juneteenth celebration, the oldest known event commemorating the end of slavery in America.

The stark subject matter can make Picturing Justice a challenging show to take in, but the enthusiastic response to the exhibition, from ACP festival-goers and from the clients represented, shows that presenting such works can be done successfully.