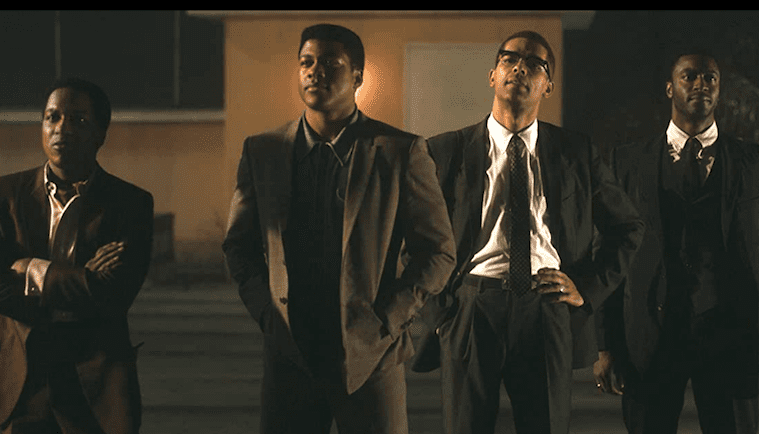 Review: “One Night in Miami” both punches and flails in telling tale of 4 Black heroes

A great story and a promising director struggle to distinguish themselves in One Night in Miami, and though neither thing quite happens, the fictionalized meetup of four African American heroes is worth a watch (on Amazon Prime).

The year is 1964, and it’s the night on which Cassius Clay (Eli Goree) — as he was still known — wrested the heavyweight boxing title away from Sonny Liston. But instead of painting the beach town red in celebration, he convenes with three other celebrities: crooner Sam Cooke (Hamilton Tony Award winner Leslie Odom Jr.); NFL legend Jim Brown (Aldis Hodge), on the verge of a promising acting career; and the man who’s summoned them to his unimpressive hotel room, Nation of Islam firebrand Malcolm X (Kingsley Ben-Adir). 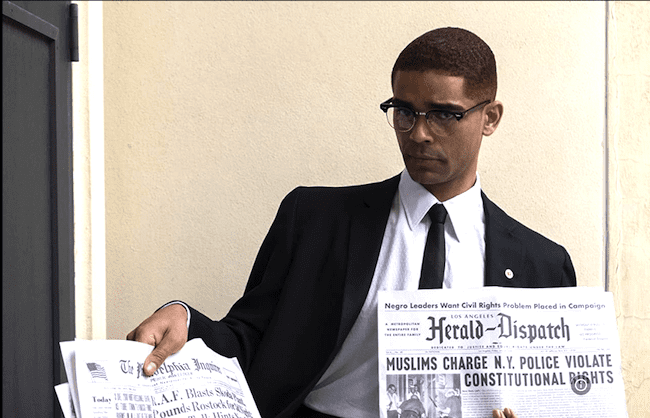 Because Malcolm is Muslim, there are neither party girls nor booze in his room. Instead, there’s a lot of earnest talk about the future of the Black race in America, and how each man can influence the course of history for their people. Malcolm obviously has the most extreme view, a doctrine of separatism from all White people. And he just may have an ace to play in front of the news cameras: Clay is considering changing his name to Muhammad Ali, joining the Nation of Islam and becoming Muslim. (That doesn’t keep him from swigging from Cooke’s flask when Malcolm is out of the room, however.)

The problem is what Malcolm describes as the boxer’s “passion” for conversion is, in Clay’s opinion, too strongly worded. For Clay, it’s more a flirtation with the idea of taking the big step, an admission that tears a slight rift between the two men. The largest tension by far is between Malcolm and Cooke. While the singer boasts that he owns the masters of his songs and has founded a record label, Malcolm berates him for not using his music to advance the lives of other Black people, the way Bob Dylan’s protest songs are stirring the broader culture. (Malcolm pointedly drops “Blowin’ in the Wind” on his turntable.)

Making her debut as a feature director, Oscar- and Emmy-winning actor Regina King proves, unsurprisingly, that she has a gift for eliciting smart, vital performances from other actors. Some of the film’s opening scenes — Cooke bombing before a White audience at the Copa, or Clay and Liston’s kinetic bout in the ring — show she knows what she’s doing with the camera. But there’s not a lot she can do to keep the bulk of Miami from feeling like the stage play with which it began life. 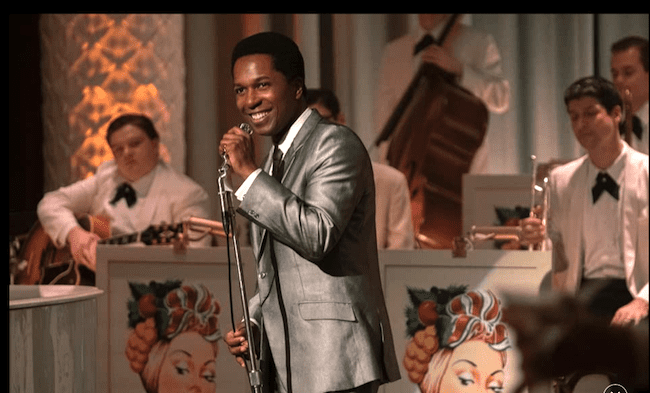 Sam Cooke (Leslie Odom Jr.) is known for the tunes “You Send Me,” “A Change Is Gonna Come” and “Twistin’ the Night Away,” among others. He was shot and killed in December 1964 at age 33.

Original playwright Kemp Powers adapted his script for the screen (he also helped write and served as a cultural consultant on Disney/Pixar’s recent Soul). While he does what he can to open his script up for the camera (letting the four men prowl around the parking lot, breezeways and rooftop of the Hampton House), it’s still primarily a lot of talking and thesis sharing among four disparate personalities.

Much of the talk is sharp, delivered masterfully by the cast. Goree’s preening, trash-talking Clay is hilarious, Odom (no surprise) sings a few Cooke songs like an angel and Hodge delivers a good, slow burn. But the standout is Ben-Adir’s Malcolm. He gets just right the man’s performative, righteously self-conscious tone while showing cracks from the stress he feels from FBI surveillance and being on the outs with Nation leader Elijah Muhammad. He sees the writing on the wall.

In 1965 Malcolm X was murdered, a fate One Night in Miami foreshadows with shots of strangers lurking on the hotel’s periphery. The film’s credits provide this information but not the news that Cooke was shot to death in another hotel before 1964 ended.

In the movie’s coda, we see Clay becoming Muhammad Ali, Brown announcing his retirement from football to act full time and Cooke on The Tonight Show singing the gorgeous “A Change Is Gonna Come,” his response to Dylan’s tune. To its credit, One Night in Miami leaves you with the mournful, what-if question — how might Cooke’s career and identity have transformed if he had lived longer into the civil rights era?