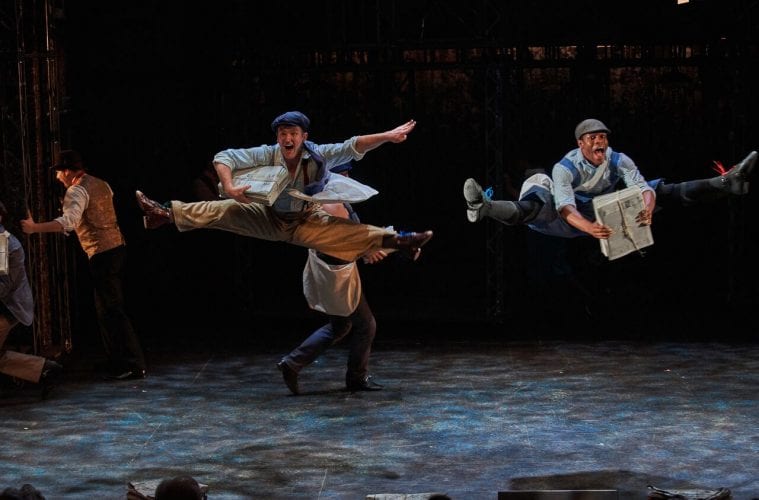 Review: “Newsies” is an old-fashioned musical that hits all the right notes

When word broke that Disney was planning a Broadway version of the 1992 movie Newsies, reactions seemed to be mixed, especially from purists who longed for original material and not another flavor-of-the-month movie-to-stage adaptation. The film didn’t exactly wow the world, but has since become a cult favorite. With assistance from some theater veterans, though, the musical has become a genuine crowd-pleaser. A collaborative effort running through September 2 at Aurora Theatre and then October 19 through November 4 at Atlanta Lyric Theatre, Newsies is old-fashioned entertainment done with skill and affection.

That the musical is directed here by Justin Anderson already gives it some serious street cred. Hands down, Anderson directs musicals better than anyone else in town.  He has an innate flair for crafting musical numbers that often soar, but he’s also careful to give weight to his characters and their situations. Here, he has chosen an engaging group of performers. This is a cast I’ve not seen — or not seen in major roles — very often. But after this, I imagine we will see them a lot.

Inspired by the Newsboys Strike of 1899 in New York City, Newsies revolves around Jack Kelly (Greg Kamp), a newspaper delivery boy — aka “newsie” — who is living among a group of other young newsies, most of them homeless or orphaned. Jack dreams of being an artist and escaping to Santa Fe. Among his clan are disabled friend Crutchie (Russell Alexander II) and Davey (Marcello Audino) and Davey’s young brother Les (Vinny Montague, Jackson Williams and Zack Kuebler, alternating), who have joined the group after their father becomes unable to work. When publisher Joseph Pulitzer (Stephan Jones) decides to raise the cost of the newspapers to the boys by a dime, it causes the gang to protest and eventually strike. 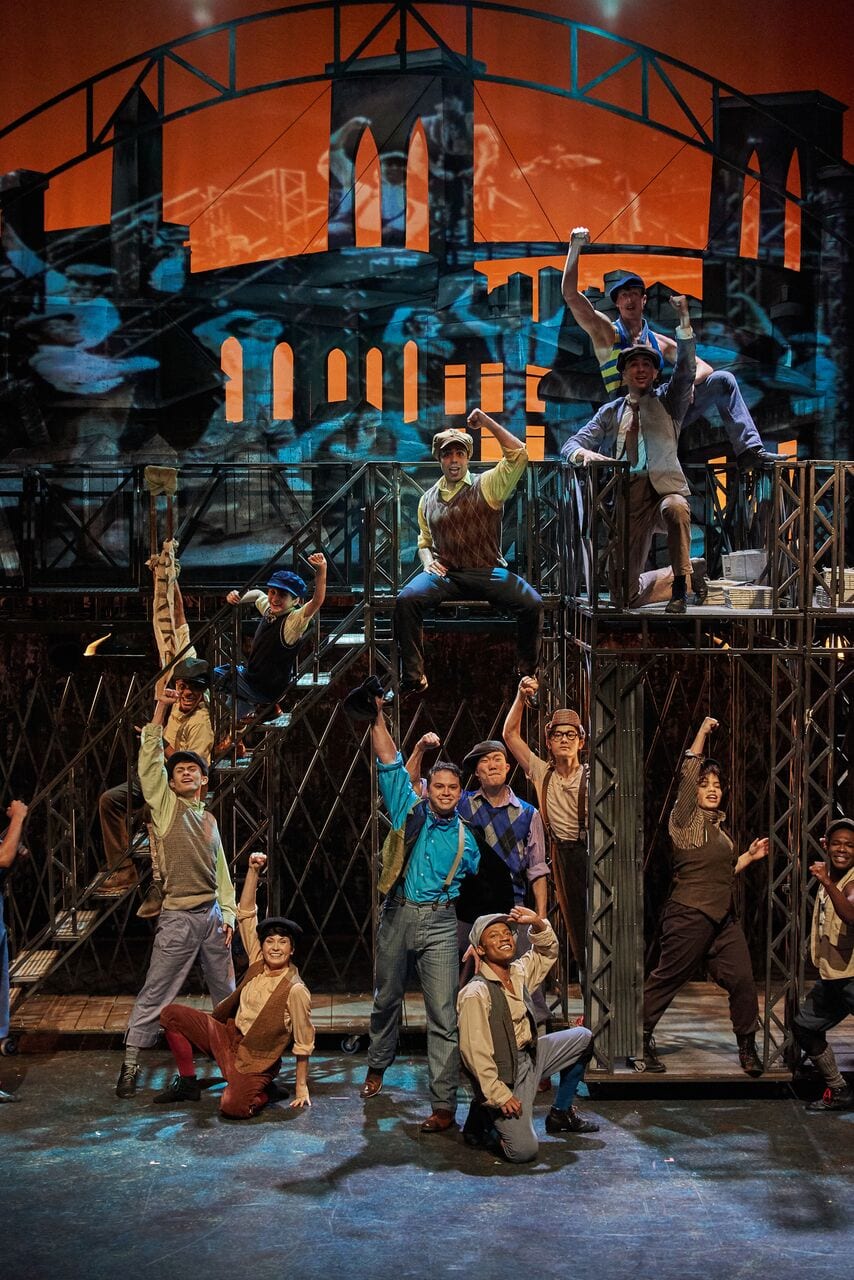 Caught up in the middle of all this is Katherine Plumber (Adrianna Trachell), a reporter who does a story on the situation but takes a fancy to Jack. It doesn’t take a fortune teller to see where this subplot is headed.

The film and the musical have some modest changes, mostly in the addition of some new songs and the removal of some others. It has a book by Harvey Feirstein, music by Alan Menken and lyrics by Jack Feldman. Nominated for eight Tony Awards in 2012, it won two, for choreography and music, losing the big prize to Once, another film turned Broadway musical. Overall, Newsies is brisk and compact with a tight score, complete with some showstoppers.

Kamp, who has been seen around town at Aurora and the Alliance and on the national tour of Catch Me If You can, is a terrific center to the musical and gives a very charismatic performance. He ponders life away from all this, but defiantly stands up for his team. Anderson also gets naturalistic performances by Alexander and Audino, both of whom can act and sing.

Technically, this version of Newsies is superb. Alan Yeong, who has had a busy season costuming this and Titanic: The Musical, works wonders with his period-piece garb, while set designer Shannon Robert’s sturdy set shifts from the street confines of the newsies to the high-power office of Pulitzer to a theater club and more. Music director Ann-Carol Pence’s 10-person band/orchestra zip through the score, with the hyperactive “King of New York” being one of the many highlights.

This is a Disney production, so it’s harmless and lacking in any real hard edges. If there’s a weakness to the musical, it’s with the depth of many of the characters. A lot of the supporting players don’t have much distinction, especially Crutchie and Pulitzer. The female characters are a bit short-changed as well. Katherine has a wonderful solo number (“Watch What Happens”) and a great presence but is not terribly deep. Having even less dimension is the character of Medda Larkin. Played by Mahalia Jackson, the character is a singer who owns a theater catering to vaudeville-style entertainment. Like Katherine, Medda has a single number and a scene or two afterward, but not much more.

Even if some of the players have limited character development, the entire ensemble is likable and sharp. Many of the fellow Newsies may not have much personality, but they certainly overcompensate for it in spirit, leaping, somersaulting and pirouetting all across the Aurora stage in number after number. Doing a lot of that heavy lifting are Zach Gamet, Sterling McClary, Joseph Pendergrast, Atarius Armstrong, Aaron Carter, Chris De’Angelo, Luke Badura, Evan Phillips, Peyton McDaniel and Kevin Dakake. They are a pleasure to watch.

If there’s an MVP here, though, it might be Ricardo Aponte. Aponte is a very talented choreographer, but sometimes he can overwork his dancers, such as in the frantic opening numbers of the recent Mamma Mia! Yet his work here is splendid, possibly a career best. Some of the dancing and movement here is as fluid and imaginative as any I’ve seen on an Atlanta stage.

Newsies opens the 23rd season for Aurora. It’s been said before, but no other local company has produced as many quality musicals over the last half decade as Aurora has, and this is another worthy effort. Newsies may not have the spectacle of a ship sinking as does Serenbe Playhouse’s Titanic or hall of fame numbers from Latrice Pace as does Actor’s Express’ The Color Purple, but it stands very squarely and successfully on its own feet.