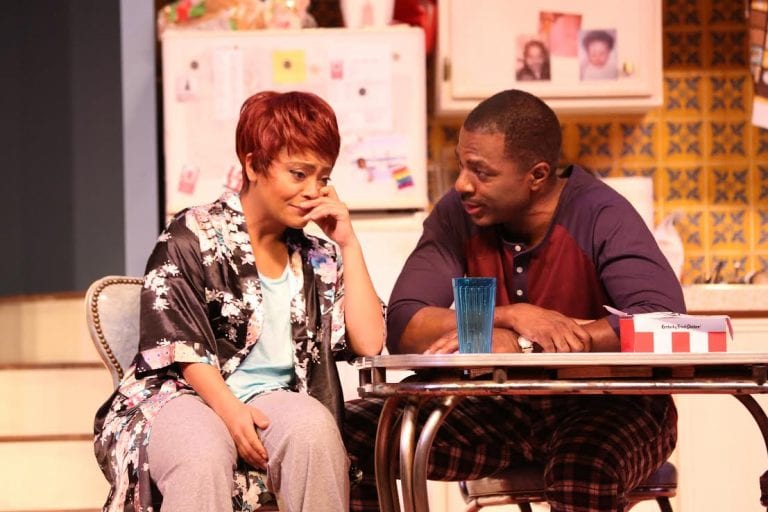 Shelly (Tinashe Kajese-Bolden) and Donnie (Gilbert Glenn Brown) must figure out how to care for their mother who has been diagnosed with Alzheimer's. (Photo by Brenda Nicole Photography)

Review: “Dot” at True Colors brings vivid life and humor to the tragedy of Alzheimer’s

Dotty (Denise Burse) has a not-so-hidden secret. She’s been diagnosed with Alzheimer’s, and now that her children are coming home for the holidays, she has to break the news to them. But, things aren’t that bad — as long as her eldest daughter Shelly (Tinashe Kajese-Bolden) and caretaker Fidel (Benedetto Robinson) are there to make sure she doesn’t leave the stove on, hide the car keys, count her pills and fetch the Christmas tree.

Shelly, however, has plans of her own — it’s time for her siblings Donnie (Gilbert Glenn Brown) and Averie (Amber A. Harris) to start shouldering the burden of caring for their mother. Kenny Leon directs the True Colors Theatre Company production of Colman Domingo’s dramatic comedy Dot, onstage at Southwest Arts Center through August 12.

The play premiered at the Humana Festival of New American Plays in 2015 and lends a new perspective to dealing with Alzheimer’s by granting longevity to blackness. There are nearly 500,000 new Alzheimer’s diagnoses each year in the United States according to the Alzheimer’s Association, and African Americans and Latinos are hit the hardest. Poverty and racism leave Latinos and African Americans underdiagnosed and more susceptible to dying from the disease. With so many baby boomers being diagnosed, a huge information gap is being left in American families — and in society as a whole. Who will remember how to use a rotary phone or a record player? Who will remember which battles we’ve fought and won? Who will pass down that knowledge?

Domingo has crafted a touching and hilarious script, bringing a light and airy sense of humor to a tragic disease. Single mother and attorney Shelly can’t find a man, so she manages everyone else’s life. The youngest of the Shealy children, Averie, is a failed YouTube sensation who is working at the local Price Right. And musicologist brother Donnie and his white husband Adam (Lee Osorio) constantly bicker because Donnie wants to start a family and Adam wants to party. To add to the chaos, their childhood friend Jackie (Rhyn McLemore Saver) has run back to the old neighborhood to escape some questionable choices she made in New York.

This is a strong ensemble and one of Leon’s most even productions to date. The scenes with the siblings are “laugh out loud” funny, and Shelly’s hair takes on a life of its own. Burse delivers a beautifully complex performance that shows both comical lucid moments of connection as well as the struggle of a woman who is trying to ensure her children’s well-being while she is in need of taking care of herself. The scenes between Burse and Robinson are especially touching, conveying the internal conflict between knowing what was and dealing with what is.

Donnie is grappling with a similar conflict as it relates to his career. Domingo uses his character to examine the role of critics as preservers of cultural history. The decline of print media, where newspapers no longer publish music criticism as they used to, has left a world where “money is funny and change is strange” and anyone with a blog is an instant expert.

Another through line of Domingo’s script is linking a societal shift in values to people’s increased access to material things. In one of her lucid moments, Dotty rants about neighbors who “ride around in Range Rovers and don’t even clean their porch,” suggesting that when all people had was their homes and families, they took better care of both.

That sensibility is emphasized through Domingo’s ridiculous monologue about the chitterlings Averie brings to Christmas dinner. He suggests that people who don’t have the financial means to buy fancy things cherish what they’ve been given more than those who have the means.

The play takes place in the family home, with set design by Isabel and Moriah Curley-Clay. They have created a set that effectively captures the moment when a house stops being updated — the home’s grandeur is diminishing like Dotty’s memory.

During a conversation, Dotty says that there’s a difference between “fading away and going away,” and she misses having that choice. Domingo manages to unmask the way Alzheimer’s patients relive past traumas while also forming uncouth and irreverent one-liners. For this True Colors production, as the cast finds their rhythm, this show, unlike Dotty’s memory, will only get better with time.