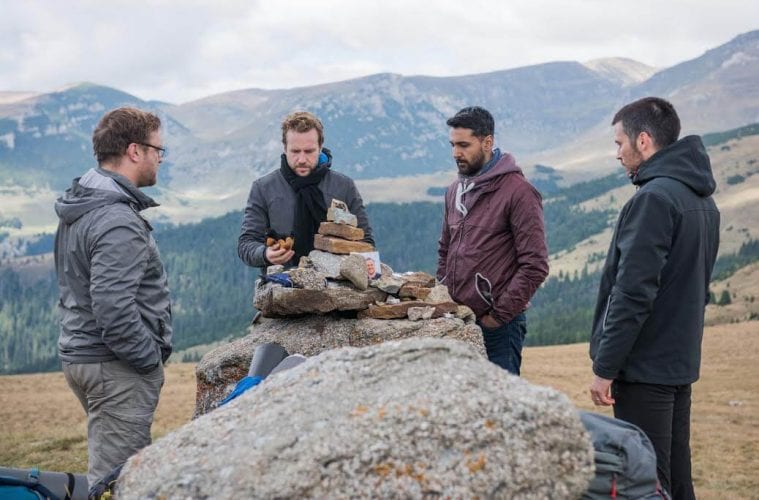 During a commercial break at this year’s Super Bowl, Netflix announced that it would be debuting a film called The Cloverfield Paradox immediately after the big game. The surprise stunt drew enormous attention to the previously unknown sci-fi horror film.

The Super Bowl comes but once a year, and it’s too much to expect Netflix to provide that kind of promotion to its other acquisitions and original movies. But any additional acknowledgment would be nice for many of those feature films. It’s nice that Netflix makes many below-the-radar movies available to a vast potential audience, but it doesn’t help if subscribers have no idea they even exist.

The Ritual is just the kind of solid effort that deserves more promotion, especially if you enjoy a small-scale horror film that makes the most of a limited budget. It’s the feature debut of Atlanta native David Bruckner as a solo director. Bruckner previous proved his chops by helming the acclaimed “Amateur Hour” segment from the anthology V/H/S and being one of the three directors of the triptych-style sleeper hit The Signal.

With The Ritual, Bruckner effectively places an intimate story against a sprawling backdrop. Four former college friends from England, now in their thirties, take a hiking trip in Northern Sweden in part to honor the memory of a fifth friend. Rafe Spall plays Luke, who blames himself for the friend’s death due to a grisly incident at a big-city liquor store.

Good-natured grousing and masculine camaraderie marks the trip until loud-mouthed Dom (Sam Troughton) injures his knee and the foursome decides to make a shortcut through dense woods. Not only do they lose their bearings, they encounter increasingly ominous portents, including animal carcasses hung in trees, weird symbols posted on the paths and signs of previous hikers’ unlucky fates. Increasingly, they appear to be hunted by something that seems neither human nor animal.

The Ritual follows in the footsteps of suspense films that find hapless humans unprepared to face a hostile wilderness, such as Deliverance or The Blair Witch Project. The best of these make nature seem threatening, not idyllic, and the film’s early scenes capture the hikers as isolated and vulnerable, like prey on desolate hillsides. (In the production, Romania stands in for Sweden.) “These mountains were smashed out by Nordic gods with big bastard hammers,” quips one, hinting that the city folk are out of their elements.

Perhaps Bruckner’s best detail is simply how the film shoots the forest: often, the spindly trunks seem arranged close together, like quills or skeletal fingers. They serve as barriers concealing from view dangers that may be much closer than they seem. Our protagonists can’t see the horrors for the trees.

Screenwriter Joe Barton makes some departures from Adam Nevill’s evocative 2011 novel of the same name. In the book, Luke’s alienation from his yuppie friends comes from more deep-seated personal problems. Here, he’s preoccupied by their friend’s death, indicating that the screen story will deliver a more conventional redemption arc.

The new plot point provides some of the film’s most weirdly memorable moments, as guilt-ridden Luke experiences visions of fluorescent ceiling or shopping aisles standing incongruously in the middle of the woods.

The Ritual features a fine cast, although they tend to emphasize a single characteristic. In addition to Spall’s chain-smoking hauntedness, Robert James-Collier serves as the reassuring alpha male, Troughton the aggressive complainer and Arsher Ali the most mentally shaken by their experiences. All four convey how the events take a toll on their characters’ grips on sanity.

The film’s third act goes in a sharply different direction that shouldn’t be spoiled but effectively draws on another well-established horror subgenre. The Ritual doesn’t cheat on revealing its long-hidden threat, and crafts some unique images without obvious precedent in horror cinema.

Compared to other modest fright films to have recent Netflix debuts, The Ritual belongs alongside the occult mood piece A Dark Song and the grisly creature feature The Void. While not groundbreaking, it’s a satisfying supernatural thriller on its own terms, and its signal definitely deserves a boost.