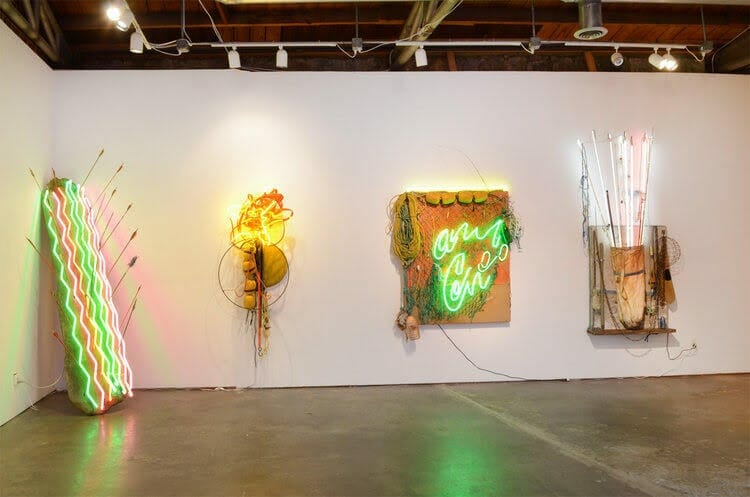 Dreams River at Marcia Wood Gallery, a small show featuring Savannah artist Marcus Kenney’s assemblage sculptures, bears a tremendous weight. What makes the sculptures seem unbearably heavy in this show — extended through December 14 — is the weight of their meaning. Each found object holds its own history, function and significance. Many seem altar-like or reminiscent of a relic or artifact but are made of common objects you might find in a fishing shack. “Dreams River” by Savannah artist Marcus Kenney has been extended through December 14.

The art objects are made of weathered and used found objects that Kenney does little to hide, disguise or decorate. The show’s title and the titles of the works themselves — my apocalypse, wade thru darkness, not far from here is a long way home — read as more poetic than do his aesthetics. Much of what you see may be just as he found it near his Lowcountry home — cracked, rusted and brittle.

The size and presence of each sculpture is impressive. Beyond materials, though, the works don’t seem to present a conversation that might define Dreams River as a significant showing of the artist’s work. The poetic and abstracted framework distracts from the very literal and comprehensive conversation happening between the thoughtfully chosen found objects. In this case, the figurative is grounded in the literal.

What weaves the narratives among sculptures is the consistent use of similar materials and textures. Kenney employs functional objects intended to construct, mend, pierce and trap. Scissors, knives, nets, wood and nails reoccur, as do neon lights, a newer element of his practice. The assemblages layer object upon object to create narratives that are unique to each viewer but still cohesive enough to unify each piece here. The often-industrial-looking sculptures seem to bear down on the walls and, at times, into them. The large-scale my apocalypse (2019) hangs from a metal barn-door mount. An incalculable number of nails pierce a large stretch of thick paneled vinyl. The material, like the hide of an animal, is colored in organic browns, appearing stained or dirty from use.

It curls at the bottom, exposing the treacherous tips of the nails digging into the wall behind. Draped ropes and chains add to the heft of the piece, signaling to viewers that something has been caught or — worse yet — suppressed. Pink neon bars flank the sculpture, enlivening the chains’ rust colors and making rhinestones on the heads of the nails glint.

The use of the brightly colored light adds a modern inorganic element to the sculptures that juxtaposes the found objects’ imprinted histories.

The sculpture national park (2019) rests diagonally against a wall, covering the partial trunk of a cypress in undulating patterns of neon light. The pinks, greens and oranges of light complement the grain of the gnarled wood. The sculpture is pierced several times by arrows that stick out haphazardly.

The arrows’ colored fletching clashes with the neon’s unnatural light, creating something that’s unsettling to the eye. It appears as if Kenney is experimenting with neon, allowing it to bend and loop with the shapes and forms of some sculptures and clash and confront with others. Some works feature tubes of light left to shine brightly; others are spray-painted so the light is obscured or subdued. The arrows burrowed into national park support the narrative of a hunt, be it the hunt for the intangible, like outrageous fortune, or the literal hunt for flesh. Nets, buoys, fishing poles, fishing lures and crab traps tighten the connection between each piece and expand Kenney’s hunt to cross land and water. The nets especially, although they often add the element of weightlessness, are meant to capture, hold and suppress. They’re often weighted and draped in elegant forms, creating beautifully patterned shadows on the walls.

The one sculpture that attempts weightlessness is titled wade thru darkness (2019). Its body, which seems to be made of red and blue neon, hovers just above an old milk crate.

Rope and blue neon drape to the left, and netting — decorated with a bright orange lure — drapes to the right. The form, flayed like a fish or open armed like the crucified, expresses the hopelessness of a trapped animal. It tries to rise but cannot, held down by an orange buoy and shackled to the wall by rusty hardware.

Dreams River might be interpreted as an attempt to capture light — not with the tools of a painter or photographer but with the tools of a craftsman and hunter. There is a harshness and cruelty in how each work possesses light. It pools across the gallery walls like blood.

Regardless of how you experience Kenney’s sculptures, it’s impossible not to feel a tremendous heaviness.