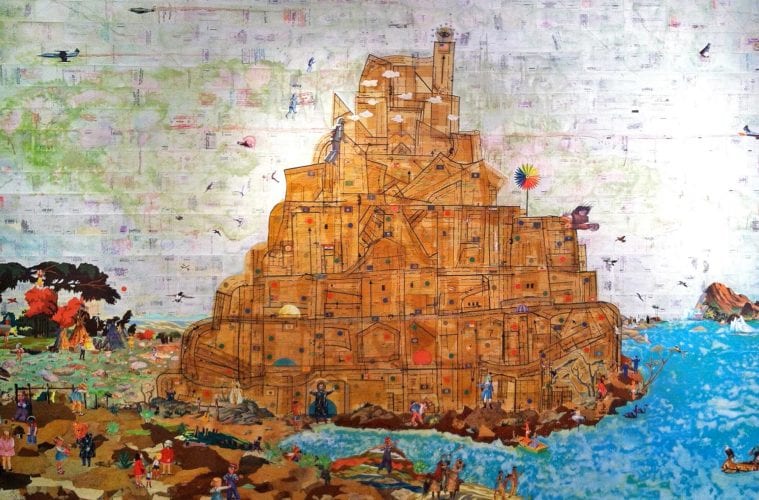 From the look of things at Babble, Marcus Kenney’s rollicking show of new work at Marcia Wood Gallery, it’s politics as usual but in a whole new post-financial-crash world. We are hoarding seed, dirt and water to shore up against future crisis. We are buying and selling our friends. We are still at war. George Washington wears a bandit’s mask made from the American flag. Abraham Lincoln sports fangs.  The stories we have been told and the ones we have told ourselves no longer sustain us and no longer stand. The center cannot hold. The Dhope Man is coming.

In fact, “Dhope Man Coming,” is the title of the tuneless song that is Kenney’s version of an artist’s statement. This is US/This is we/This is eye/This is ze, he intones, and God help us if this is true. If this is us, then we are frenzied, disillusioned and won’t have to wait too long for the end times. We are living the legacy of that American flag-wearing bandit Kenney has named “g dub’” in his 2008 painting, and are readying for the Fall in this (almost) post-Obama world.  If we don’t believe it, the evidence is right here. In “DHOPE MAN,” (2016), that candidate’s hopeful slogan – and ours — has been defaced. Hope has been replaced with dhope.  Urban Dictionary defines “dhope” as:  1. “coolness in all it’s (sic) purity,” and 2. “the power of hope.” Interpret as you will. It seems that we are destined for misunderstanding, separation and an inability to communicate. Nothing says this more captivatingly than “Tower of Babel,” (2014), Kenney’s fantastic, colossal — and colossally entertaining – ziggurat of canceled checks and old, transparent dress patterns looming over a paradisaical island of many nations. Think of the 1563 version of the tower by Pieter Bruegel the Elder, then add spacemen, pilgrims and an assortment of mask-wearing characters.

In the Biblical version, God thwarted the plans of these ancient masters of the universe, builders of this skyscraper of yore, by scrambling their language so they could no longer cooperate and communicate. In Kenney’s depiction of the Tower of Babel, we have never recovered. Everything and everybody is still mixed up. All the tropes that once supported (deluded?) us can no longer hold, and probably weren’t true to begin with. George Washington (him, again) finds the baby Moses in the bulrushes. A minstrel in blackface pokes his head out of a tepee where African children are being taught by a Fauntleroy-style white boy in a pharaoh mask. A policeman, the kind on the old street crossing signs, buggers a cow. Above it all is the all-seeing Eye of Providence, more kohl-lined Egyptian than Masonic Symbol. Masks and hybrids are everywhere. Nothing is as it used to seem. His fans will undoubtedly recognize its familiar collaged elements of canceled checks, savings stamps and other found papers, and the familiar cutouts of children doing very un-childlike things that have drawn accurate comparisons to the posthumously discovered creations of the outsider artist Henry Darger.

We may be plagued by an inability to communicate, but in Kenney’s work money still talks as loudly as it ever has. Thought bubbles containing dollar signs are painted onto the survivalist barrels “filled” with seed, dirt and water, on the surfaces of his paintings, and a huge one in gold glitter appears on the American flag – “Old friends 4 sale,” (2016).

If the end is nigh, then what the heck? We’d better party. And like any end-of-times narrative, the smart ones who see it coming let the good times roll. A rogue’s gallery of characters, boldly painted, colorful, and many with a folk art quality reminiscent of Mose Tolliver, live out their own end-of-times fantasies and behaviors on the white walls of the gallery. It looks like sex is at the top of the list, especially in the 10 drawings in watercolor and pencil on paper collectively called “Babble Drawings,” all from 2016. They flank a large painting of a creepy guy with a comb-over looking stunned by it all, a squishy hole for a mouth and unseeing eyes crossed out in black. As implied by its title, ”Babble,” this guy is incoherent and an apt illustration of the lyrics of Kenney’s song: Feed me with dope for my spirit/Clothe me with sex . . . Deceit and Lies/#Never forever/Scratch out my eyes.

The meaning of the Dhope Man is vague, but his significance is not. Kenney has told us he’s coming.  He tells us so in the title of his song and maybe that is all we need to know. (The Dhope Man cometh; the Dhope Man taketh away, maybe?) In one painting, he is portrayed as one part swashbuckling Errol Flynn-type in vest and UGG boots, and the other part, minstrel-like in black hood, white eyes and mouth. In “Pilgrim,” (2012), Dhope Man seems to inhabit a stage, but his black hood, this time above a pilgrim-style belt buckle, conceals blue eyes. He is more Hershey’s Kiss or the scatological emoticon on your iPhone than human, and this cartoonish aspect makes his raised hands, open mouth and surprised expression even more disturbing by eliciting more recent concerns —  “Black Lives Matter,” “Hands up, Don’t shoot,” and even echoes of Abu Ghraib.

But here’s the thing. Somehow, even with those comparisons, Kenney’s work doesn’t seem political. Oh, it’s all here — politics, religion, race (I think), but Babble, this multifarious exhibition of sculpture, assemblage, mixed media painting and drawing, does solidify his talent for deadpan humor and storytelling that draws from the political, the religious and the social issues of our day but never feels heavy-handed, or, with the exception of G-Dub in a bandit’s mask, really even political.

In “Self Portrait,” (2014), a boy in a white owl mask paints himself into the picture he is creating, but in the end Kenney’s take on things may not matter. What is clear is that something is amiss with the stories we’ve been told, and Marcus Kenney is having a good time making up his own.  I would bet he wants us to do the same. He wrote the song, but you can sing it to whatever tune you come up with.
At Marcia Wood Gallery. Extended through June 25.