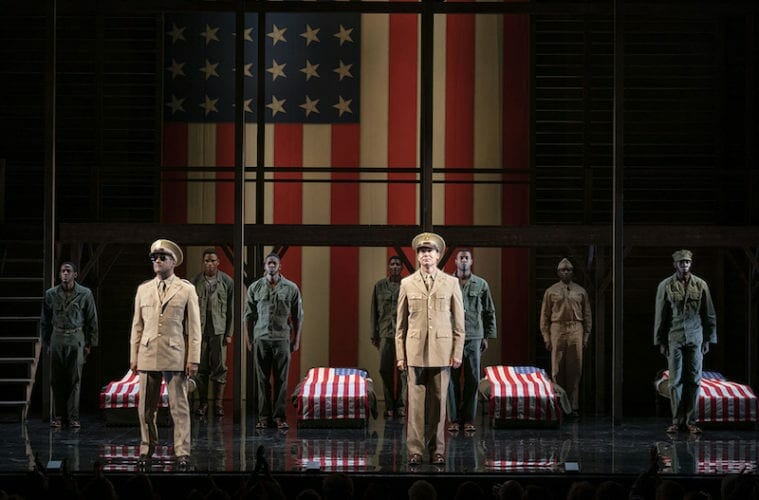 The Broadway company of the Kenny Leon-directed "A Soldier's Play." (Photo by Joan Marcus)

The Kenny Leon-directed A Soldier’s Play — a script from 1981 — opened this week on Broadway, getting mostly favorable notices from New York critics. Only Jesse Green writing for The New York Times differed, offering a mixed review. The Roundabout Theatre Company staging is at the American Airlines Theatre on West 42nd Street in a limited run that ends March 15. Its 12-man cast is led by David Alan Grier and Blair Underwood with Nnamdi Asomugha, McKinley Belcher III, Rob Demery, Jared Grimes, Billy Eugene Jones, Nate Mann, Warner Miller, J. Alphonse Nicholson, Jerry O’Connell and Lee Aaron Rosen. Demery, an Atlanta actor, is making his Broadway debut. Leon, who once led the Alliance Theatre and cofounded Atlanta’s True Colors Theatre Company, still spends some of his time here. He won a directorial Tony Award for his work on A Raisin in the Sun in 2014. A Soldier’s Play is his 11th Broadway show as a director.

It’s 1944. A black sergeant is murdered on a Louisiana Army base, and one tenacious investigator must race against his white leadership to unravel the crime before they unravel him. The murder mystery, by playwright Charles Fuller, won a Pulitzer Prize for Drama and was made into a 1984 movie titled A Soldier’s Story.