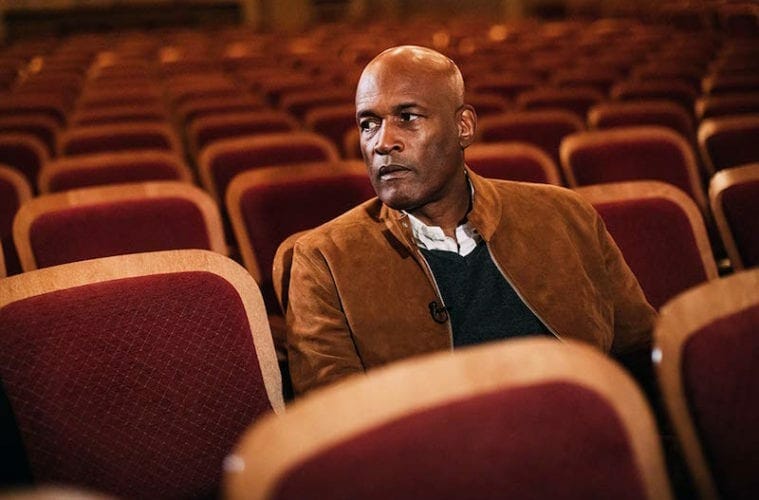 "Founders usually hold on to things until they squeeze everything out of it," Kenny Leon says of his exit this year from Atlanta's True Colors Theatre Company. "It felt like such a blessing to hand it off while there was money in the bank and a board of directors and a subscription audience."

Kenny Leon might have left True Colors, the Atlanta theater company bearing his name, but in typical fashion, the Tony Award-winning director remains as productive as ever, working locally and in New York.

Leon’s version of the play American Son, which ran on Broadway for three months last year, became a film that debuted at the Toronto Film Festival and premiered November 1 on Netflix. It features Kerry Washington and Steven Pasquale as the parents of a missing 18-year-old boy who spend their early-morning hours with contentious police trying to learn what happened. Director Kenny Leon (far right) with his Broadway and Netflix cast of “American Son” — Steven Pasquale (from left), Kerry Washington, Eugene Lee and Jeremy Jordan. “When I did it for Netflix,” Leon says, “I thought ‘How can I make this a horror movie?'”

He’s in previews for the world premiere of playwright Will Eno’s The Underlying Chris, opening November 21 at New York’s Second Stage, and then moves on to the Broadway premiere of Charles Fuller’s 1982 Pulitzer Prize-winning drama A Soldier’s Play, which had a yearlong run off-Broadway but never played the Great White Way (so named for the thousands of bulbs that brighten the district). A Soldier’s Play, a Roundabout Theatre Company production, begins previews in late December and opens January 21. It will be Leon’s 11th credit as a Broadway director.

ArtsATL recently caught up with Leon, 63, to talk about American Son, his post-True Colors life and what’s percolating in his directorial world.

ArtsATL: When did you learn that American Son would be a film?

Kenny Leon: When I first got the script, I thought it would be a great play, but I also saw that it had cinematic potential. We talked about it without really knowing if anything could happen. The third week of our run, I got a call from Netflix. They had met with Kerry and wanted to know if I was interested in putting it on camera. We figured out what we were going to do, and I prepped one day a week until the closing of the play. We went into a week of preparation and shot it in five days. In “American Son,” Kerry Washington (left) and Steven Pasquale play the parents of a missing 18-year-old boy. Jeremy Jordan is a police officer. The drama premiered on Broadway a year ago, before becoming a film and moving to Netflix, where it’s now streaming. (Photo by Peter Cunningham)

ArtsATL: What was the biggest challenge in adapting it?

Leon: Deciding what we wanted it to be. At the time we found out, we didn’t know how we would shoot the play. I thought it was a self-contained film. I didn’t want to shoot an audience looking at this. I wanted a piece specifically for the camera. The real tension is in the police station, but I knew we needed to get out five or six times, and I figured out a way to do that. We shot it with three cameras to keep the tension going. We were able to do things you couldn’t in a play. Onstage, it was four different opinions about this incident. I made the film, though, to be like a mother’s worst nightmare. When I did it for Netflix, I thought, “How can I make this a horror movie? What does any mother go through when she gets a call like this at four in the morning?”

ArtsATL: Why is American Son so relevant right now?

Leon: We have a lot of divisive things going on. The more we realize that we are one blood, one people, one country, the better things are. That goes for us worldwide as well. I love the way that Netflix is putting money behind this in terms of spreading the word. [It wants] to make this a conversation and not just a movie. It relates to everyone. That kid could be anyone’s kid. ArtsATL: What can you say about directing The Underlying Chris at Second Stage?

Leon: It’s my first time working with Will Eno, and he’s a genius of a writer. He has written a play about our time on the planet. It’s like a present-day Our Town, but it’s inclusive of many races and ages. Our youngest actor is 10, and our oldest is 82. It’s like 80 years in a person’s life from the time a mother looks at a baby in a bassinet to the time they are in a box in the ground. It captures all those moments that make us human and special to the universe — and what we have in common. It’s a very strong piece. I haven’t read a play like this in 15 years or so.

ArtsATL: Once The Underlying Chris opens, you move on to A Soldier’s Play, right? What can you tell us about that?

Leon: Yes! The cast includes David Alan Grier and Blair Underwood. It’s the first time the show has been on Broadway. It was first done [38] years ago with Denzel Washington, before he was famous, and Samuel L. Jackson. It’s been [38] years in the making to get this to Broadway. [The production with Denzel Washington and Samuel L. Jackson premiered off-Broadway on November 20, 1981.] It begins previews December 22. I love what the play says about America and sacrifice and racism in the United States.

ArtsATL: You directed Much Ado About Nothing at Shakespeare in the Park this year. Why did you change the setting to Georgia?

Leon: I think people overly complicate Shakespeare. We got a wonderful dramaturg and thought, “What would Shakespeare think if he were alive today?” I had to decide where the war was, and I thought it would be in the future before the election. I set the play in the South. You have a beautiful plus-size woman in Danielle Brooks, playing Beatrice. It ended up being an all-African American cast. I didn’t set out to do that. I set it up to be about community, fake news and love of country. I have probably never been as proud of a play in my life. You read the play — Shakespeare wrote this 500 years ago. He set it in Aragon, Italy — and 20 miles from my house in Cobb County is a place called Aragon. I realized that the play is dealing with upper-middle-class people, and I said, “Atlanta has a huge middle class, especially black middle class.” It was a great experience, and PBS included us in its Great Performances series [airing November 22].

Danielle Brooks (center) is Beatrice, the romance-shy woman who would rather spar with men than accept their advances, in Kenny Leon’s “Much Ado About Nothing.” Brooks (“Orange Is the New Black”) plays opposite Grantham Coleman’s Benedict. (Photo by Joan Marcus)

ArtsATL: When did you realize you’d be leaving True Colors?

Leon: I guess about two years ago. I thought I would transition out in three years. I had Jamil Jude work under me for a year. Founders usually hold on to things until they squeeze everything out of it. It felt like such a blessing to hand it off while there was money in the bank and a board of directors and a subscription audience. It was time for him to run the theater. We worked together for another year; I let him take the lead, and I handed it to him in July.

ArtsATL: Atlanta today looks nothing like Atlanta did when you were artistic director at the Alliance Theatre [1988–2000], does it?

Leon: Tyler Perry had an event at his studio a few weeks ago and named studios after great African Americans such as Denzel Washington, Oprah Winfrey, Harry Belafonte, Halle Berry, Ruby Dee and Sidney Poitier. This used to be the ground of a Confederate army base, and now Tyler Perry, a black man, owns this space and has turned it into a studio bigger than anything in the country. There are other studios here as well. At any given time, there are 20 to 30 projects going on every month. You can come to Atlanta and have an artistic existence and options. You have TV shows and more platforms. A lot is happening. ArtsATL: What’s next for you?

Leon: I’m developing a version of the film Trading Places for Broadway. I’m putting a woman in the Eddie Murphy role. We have a workshop in November and then again in spring. I’m also doing a revival of Proof for Broadway and a revival of the play Jar the Floor.

ArtsATL: You do TV, film and theater now. What’s your preference?

Leon: I love them all, but if someone had a gun to my head, the one I couldn’t give up is live theater.