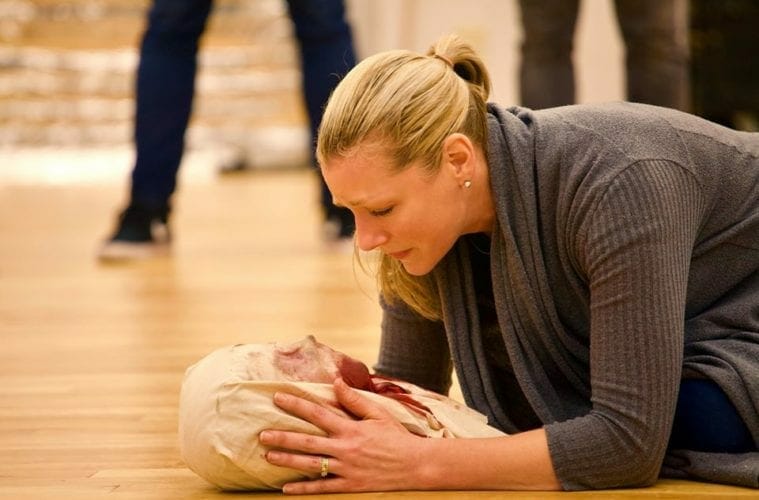 Jennifer Holloway, singing the title role in The Atlanta Opera production of Richard Strauss’ often controversial Salome, will not remove all of her clothing during the infamous “Dance of the Seven Veils.” It became popular for 20th-century directors to remove the final layer of clothing in the dance, leaving Salome fully exposed.

Perhaps stage directors in years past sought to heighten the shock-and-awe factor, which already includes a young woman kissing a severed head, a stepfather lusting after his daughter and other psychological sicknesses, all layered on top of a biblical story from the New Testament. The opera did, indeed, gather much attention for leaving audiences — well, those who stayed for the entire performance — unsettled.

Or perhaps, seeing as there is nothing written in the libretto that presents Salome nude at the dance’s end, it was male directors reacting to outspoken female characters such as Salome and Herodias. When the opera made its world premiere in 1905, it rode the heel of the Victorian Era’s expectations of men and especially women. Specifically, those included constricting women, family hierarchies, sexuality and respect for religious leaders — themes that playwright Oscar Wilde, who wrote Salome, addressed in many of his works.

With today’s #MeToo movement, and as more women cry out for equality, Salome and Herodias become more understood. Salome opens Saturday at the Cobb Energy Performing Arts Centre, with four performances through February 2. The original Atlanta Opera production is directed by Tomer Zvulun, the company’s general and artistic director, and includes several prominent singers with Atlanta ties. Salome is another in a series of challenging, often controversial productions that The Atlanta Opera has done, including Out of Darkness, Dead Man Walking and Soldier Songs.

The play centers on the death of John the Baptist. Salome lusts after the Baptist, demanding his death after he rejects her. Salome is persuaded by her mother, Herodias, to dance for her stepfather, Herod, King of Galilee, Palestine, after extracting his promise to give her anything she wishes. The prize she claims is the Baptist’s head. Jennifer Holloway, who grew up in Snellville and still lives in Atlanta, has performed the role of Salome across Europe.

Salome “behaves in a very childish manner in the end,” says Jennifer Larmore, who made her Atlanta Opera debut as Angelina in La Cenerentola in 2009 and will perform as the power hungry Herodias in Salome. “We look at this woman through different eyes now — at one point we looked at her as completely villainous, a seductress.”

Holloway, an alumna of Brookwood High School in Snellville and the University of Georgia, has sung as Salome across Europe. To her, performing the opera today — in front of audiences not so easily shocked — gives both the performers and the public a better chance to explore the psychologically unsettling score and character intricacies.

“We talk about #MeToo and feminism, but this is the history of feminism,” Holloway says, reached by phone at her Atlanta home. “The ways that we are able to do what we need to do and get what we need to get when we are given so little political and personal power.”

When Wilde’s version of Salome began rehearsals in London in 1892, it was immediately banned. This would become a controversy that boosted box office as Strauss’ version — the morbidly fixating opera we know today — was shut down with almost indecent speed the morning after its New York premiere in 1907 at the Metropolitan Opera.

It is fascinating that little more than a century ago, plays and operas could provoke outrage, riots, suppression and even arrests. But thanks to the internet, the most disgraceful, beautiful and bewildering sights are a click away. Which brings us to the question: Does Salome still have the capability to shock audiences?

“You constantly have to see, think, and feel — everyone does something for a reason,” Holloway says. “People who we define as bad people, there are always circumstances.”

Holloway says that the most extreme element of the opera is the unapologetic truth each character displays, despite how ugly it may be. “When we look at the libretto and the play, and understand the characters, we mostly have the same problems we’ve had for thousands of years,” she says.

The libretto depicts Salome as a woman who is abused and given no moral compass in her life, due to the upbringing of Herodias. At first glance, Herodias appears simply as a deceptive, controlling mother. But it is through the music, often high and declamatory, that we are able to understand the intricacies of her emotional damage — something that each character has in common. Nathan Berg rehearses his role as John the Baptist in “Salome.” (Photo by Julius Ahn)

“I think there are a few people inside her: the protective mother, frustrated wife, a woman who would like to say a lot of things but constantly has to bite her tongue,” Larmore says. “When she speaks, it’s more of an outburst of emotion and information.”

For a long time, few people took Salome seriously. But Strauss knew exactly what he was doing when writing a scandalous opera, one that would make it, and him, the talk of the music world. It was at a staging in Graz, Austria, in 1906 — where genius composers Gustav Mahler, Giacomo Puccini and Arnold Schoenberg (and possibly an adolescent Adolf Hitler) were in attendance — that truly spoke to how essential Strauss’ opera had become.

“They saw beyond the superficial shock layer,” says Erhard Rom, The Atlanta Opera’s scenic and projections designer. “In a way, we’re in a position now to recognize the true value of the piece today because we’re not as easily moved to the point of believing it’s unacceptable.”

Kathryn Wright, the University of Georgia’s principal opera coach and prompter, says the opera maintains its relevance in political and psychological terms. Wright lived and worked primarily in Germany for more than 20 years and was involved in two productions of Salome.

“In some ways, [Salome is] more problematic to some people today because of the way we are looking at women and how that is changing in our society,” Wright says. “There are elements that will always be shocking. I think Salome’s behavior is extreme by anyone’s standards, even in these times. But I think we find her more understandable because we have more acceptance of why she is the way she is.”

“I think we can all relate in some way, we can empathize and sympathize,” Holloway says. “We are all familiar with violence and we shouldn’t have those thoughts in our heads, but we do. And that’s what art can heal. It helps us understand.”