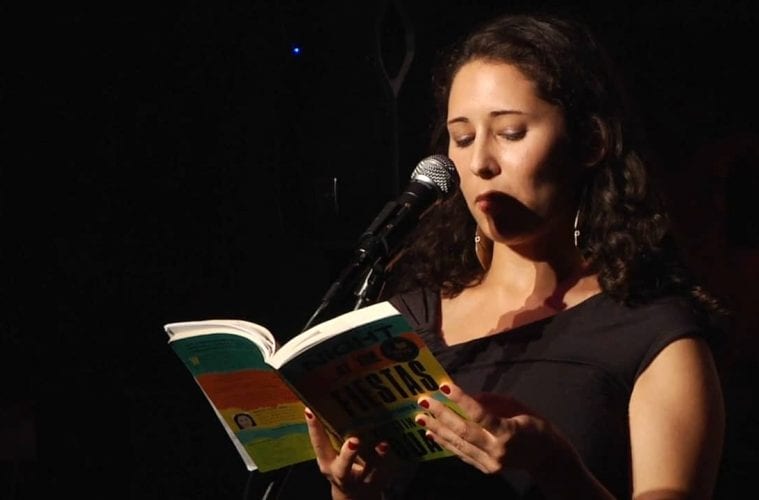 Review: Milward, Quade and Sibley Get Us Truly Lost in the Letters

It’s Saturday night, and the crowds in Little Five Points sort into their respective tribes, congregating for fragrant black beer at The Porter, the throb of Star Bar or the chintzy siren song of a Vortex cheeseburger. But here, inside this unassuming lavender house-cum-feminist bookstore is another kind of congregation. Gathered here, in tidy rows of metal fold-up chairs, is a fellowship of words — gorgeous, wrenching, wickedly funny words — and the people who love them.

Scott Daughtridge sips a latté garnished with cinnamon. Outside it is crisp, and Daughtridge is wearing an olive cardigan and greeting folks as they enter Charis Books. It’s been almost a year since I saw Daughtridge and his partner and collaborator Stephanie Dowda, and another three since I last attended a Lostintheletters reading. In some ways, coming here again felt like an introduction, or to paraphrase T.S. Eliot, arriving “where we started and [knowing] the place for the first time.”

Three years ago when I first heard of Lostintheletters, I could not have imagined what curators Scott Daughtridge and Stephanie Dowda would make and grow from what started modestly as a bi-monthly reading series in a sea of Atlanta reading series.

In that short time, they’ve graduated to curating an annual literary festival and an assortment of off-shoot programs — including workshops (nearly always free) pairing emerging and celebrated writers with the general public interested in topics ranging from “Honing Political Voice in Poetry” to “Paths to Publishing.” Still though, the soul of the enterprise remains with the reading series. I arrived at the packed bookstore bearing a red notebook eager for notes and new inspirations.

I was not disappointed.

“It’s hard to watch her undue a life together we spent 40 years creating.” Andrew Malan Milward, a Kansas native and graduate of the Iowa Writers’ Workshop, was the first reader of the evening. He shared an excerpt from the title story of his collection, I Was a Revolutionary. Milward opened with the story of an aging historian facing an impending divorce and the pressures of the non-tenured professoriate in conservative Kansas: classroom jokes that don’t quite catch, and the specter of an unrenewed appointment in the wake of a book that detailed his controversial past as an activist in the 1960s. Milward delivered his first person prose with the steady, quiet cadence that called to mind Ethan Hawke’s narration in the 1990s film adaptation of Great Expectations — which is to say that for me it worked to create a kind of white space, a soliloquy of thought where one could forget that you were sitting in a bookstore off Moreland Avenue, and consider for a moment, the secret histories of the people we think we know, the states we inhabit.

“The man’s history of manipulation doesn’t exempt him from very real cancer.” Kirstin Valdez Quade took to the stage next, reading from her award-winning short story collection Night at the Fiestas. This moved the energy out of introversion and into a minuet between two siblings who find themselves bickering in their dead grandmother’s kitchen and “mourning memories that weren’t even [theirs],” when they discover that their estranged father, Victor, is squatting in the fetid backyard guest house, breeding anacondas and claiming he is dying of cancer. Visceral, seamless and sly, what follows is a master class in character development and narration that made the crowd laugh, almost in spite of themselves, with lines like, “[He] seems to have accepted his role as failed father and human with remarkable good humor, holding no one, not his ex-wife, not his children, and least of himself responsible.”

“One of them said, ‘God is proud of you Dylann Roof.’…Where do I put that?” The final reader, Clinnesha D. Sibley, brought the evening to a crescendo with a performance of her one-act play about a young African-American couple living together and struggling through their faith in the wake of the mass shooting at Charleston’s Mother Emanuel African Methodist Episcopal Church. The couple, played adeptly by Emory alumni and actors Jasmine Walker and Troziel Carr, captures a spectrum of emotions as personal and national tragedies interweave and manifest in their decaying sex life and unequal church attendance. What begins as a slow burn explodes in an agonizing final monologue by the male protagonist, cataloging personal episodes of racial violence that have left him emotionally exposed, angry and doubting his once-beloved God. When the scene was over, the power of the thing hung silently in the air before dispelling in an eruption of applause.

It had only been 90 minutes, but in that short time I’d been transported through an emotional spectrum; from quiet anxiety, to biting humor and redemptive anger — each piece was as distinct as its author. Seen collectively though, these stories took on the shape of a well-rounded symphony experimenting movement by movement with the same motifs of loss, grief and change. A symphony that brings to mind many questions, but namely this: What does one do when one’s bedrock institutions — marriage, family, God — fail you so fantastically?

I didn’t stay to congratulate the readers on their truly excellent work. I wanted to be alone with my thoughts. Art does that. And when I emerged from the warmth and chatter of the bookstore and onto Euclid Avenue, amid the sounds of distant music and Saturday night parties, I considered what it means to lose and to find again that there is something roaring inside of us all.