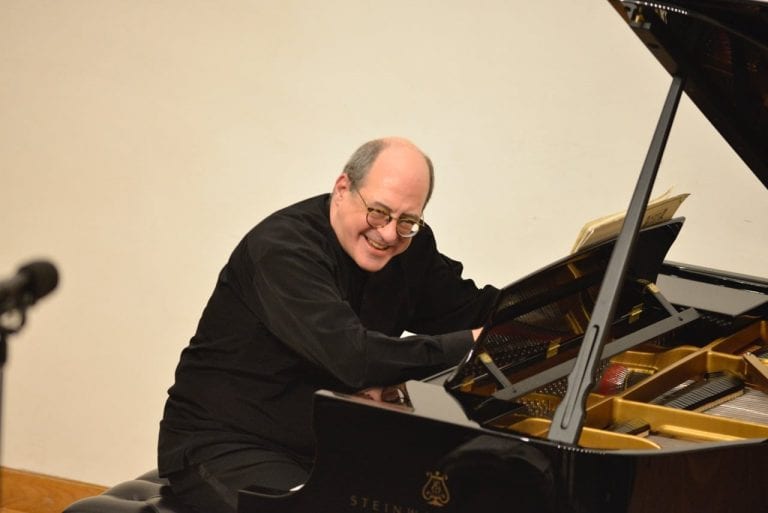 The national finals of the Rapido! Composition Contest were held Sunday at the High Museum’s Walter Hill Auditorium as the focus of a concert by the Atlanta Chamber Players.

Houston-based Mark Buller emerged as the winning composer with his “Regressive Variations.” Buller had previously won the Rapido! competition’s southwest regional finals back in the fall, placing him in contention for the national competition against four other regional finalist composers: Louis Cruz, Kenneth Lim, Kevin Eppich and Peter Van Zandt Lane.

The prize awarded Buller includes a $7,500 commission to enlarge his composition for a performance by Atlanta Chamber Players and four other participating ensembles, as well as an opportunity to compose a new work for the Atlanta Symphony Orchestra, and a two-week long residence at the Hambidge Center for Creative Arts and Sciences in North Georgia.

Founded by the Atlanta Chamber Players and the Antinori Foundation in 2009 to promote new composition for chamber ensemble, the Rapido! contest required entrants to compose four to six minutes of music for violin, clarinet and piano. Composers were given just two weeks to write their pieces.

Buller’s winning entry used a non-traditional approach to the contest’s requirement to write a “theme and variations.” Rather than begin with a theme followed by more elaborately developed variations, “Regressive Variations” begins with a complex “variation” with no real theme, then begins to extract and resolve a musical theme from those materials over the course of the work. Hence, the title.

Winning a composition contest is hardly new to Buller, who won the 2010 Vanguard Premieres Choral Composition Competition, the 2014 Sarofim Composition Award and placed second in the 2015 Voices Of Change Young Composers Project Composition Contest. He also has some recent commissions from a major arts organization under his belt.

In 2013 Houston Grand Opera commissioned a 45-minute opera from Buller and librettist Charles Anthony Silvestri for its Opera to Go! program. Premiered in January 2015 at Houston’s Heinen Theatre, The Pastry Prince, has already been performed more than 80 times to date. Houston Grand Opera has since commissioned Buller and Silvestri to write a second children’s opera, The Puffed-Up Prima Donna, for premiere later this month.

The panel of judges were Robert Spano, music director of the Atlanta Symphony Orchestra; Michael Gandolfi, head of the composition department at New England Conservatory of Music and a member of the ASO’s Atlanta School of Composers; and Grammy-winning composer Libby Larsen. Tom Key, artistic director of Theatrical Outfit, served as the event’s master of ceremonies.

The adjudicated performances of Rapido! finalists’ works took place in the second half of the concert. An open roundtable discussion with all of composers took place prior to the concert at 2 p.m.

Leading up to the competition proper, the 3 p.m. concert opened with a piano performance by Spano. He played one of his own solo works, “earthsongs,” which was partly drawn in from music he had composed for cloth, a late 2014 dance event by choreographer Lauri Stallings’ collaborative performance group, glo.

Spano performed the music’s sections in the order they were composed, rather than the order performed in 2014, and the music itself has continued to evolve some under Spano’s pen. It was a non-stop performance that possessed sweeping, chromatically fluid pianistic gestures. Spano has said the piece is a series of “discreet, small sections that make a larger whole.”

Spano’s performance was followed by two unannounced surprises in recognition of Paula Peace, ACP’s founding artistic director, who retired from the position in 2014 after serving in that role for 38 seasons.

First, Elizabeth Pridgen premiered a new solo piano work by Gandolfi, commissioned by the ACP board of directors to honor Peace. Entitled “Paula’s Piece,” the work exudes flavors of Spanish dance rhythms in a manner highly idiomatic to the instrument, reflecting Peace’s ongoing relationship with the chamber music scene in San Miguel de Allende, Mexico. It also, however, possesses a kind of ongoing cumulative movement found in music of Czech modernist Leoš Janáček and an overall shape much like an abbreviated sonata-allegro form.

Peace was also presented with a Phoenix Award from the city of Atlanta, which commemorates individuals who have made significant contributions to the local community and are celebrating a major milestone.