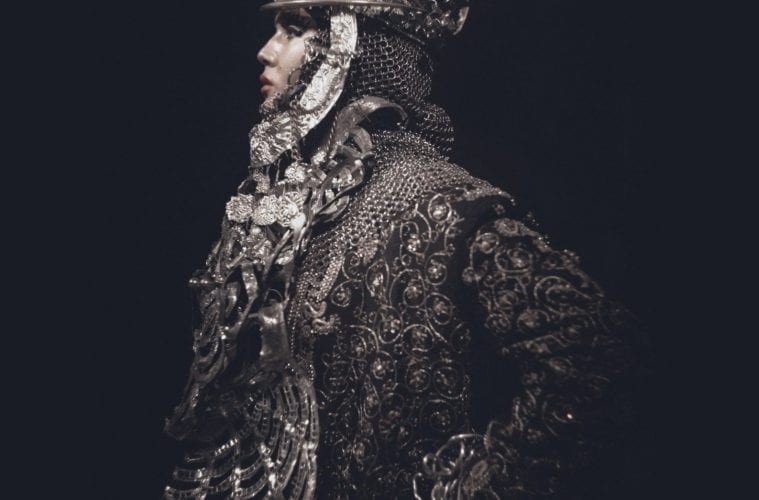 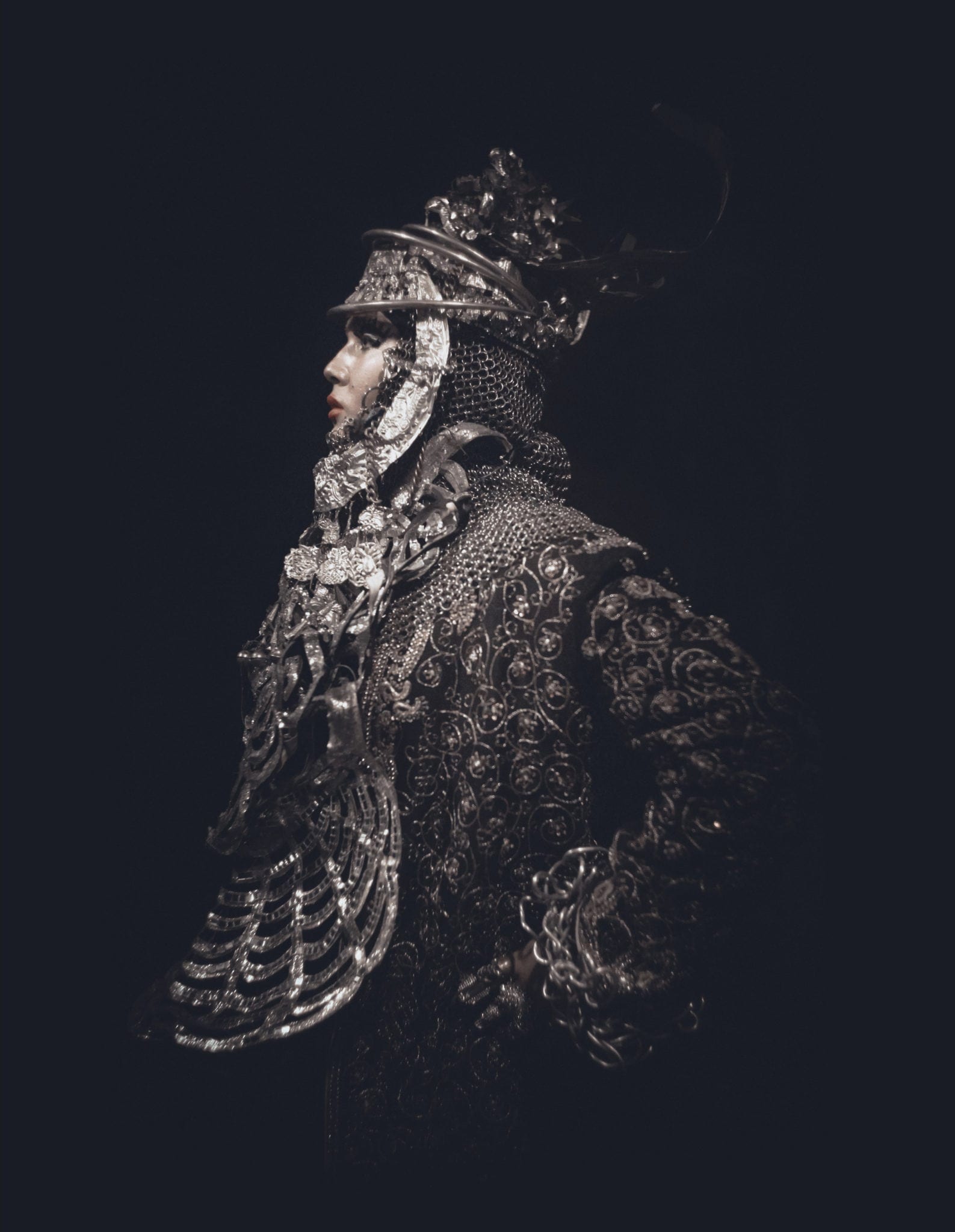 Adornment is a form of armor. At least, it seems that way in British designer Daniel Lismore’s first museum exhibition, which is running through April 1 at SCAD FASH, the Savannah College of Art and Design’s new fashion museum on the school’s Atlanta campus. In the exhibition, more than 30 mannequins stand waiting in spooky, militaristic formation, not unlike the terra cotta army of the Qin necropolis; all of them bear Lismore’s face, cast from his real visage by SCAD professor of sculpture Susan Krause, and all of them are almost entirely buried under layers upon layers of armor-like outfits that Lismore, who has been dubbed “London’s most outrageous dresser,” assembled and wore himself in his everyday life. 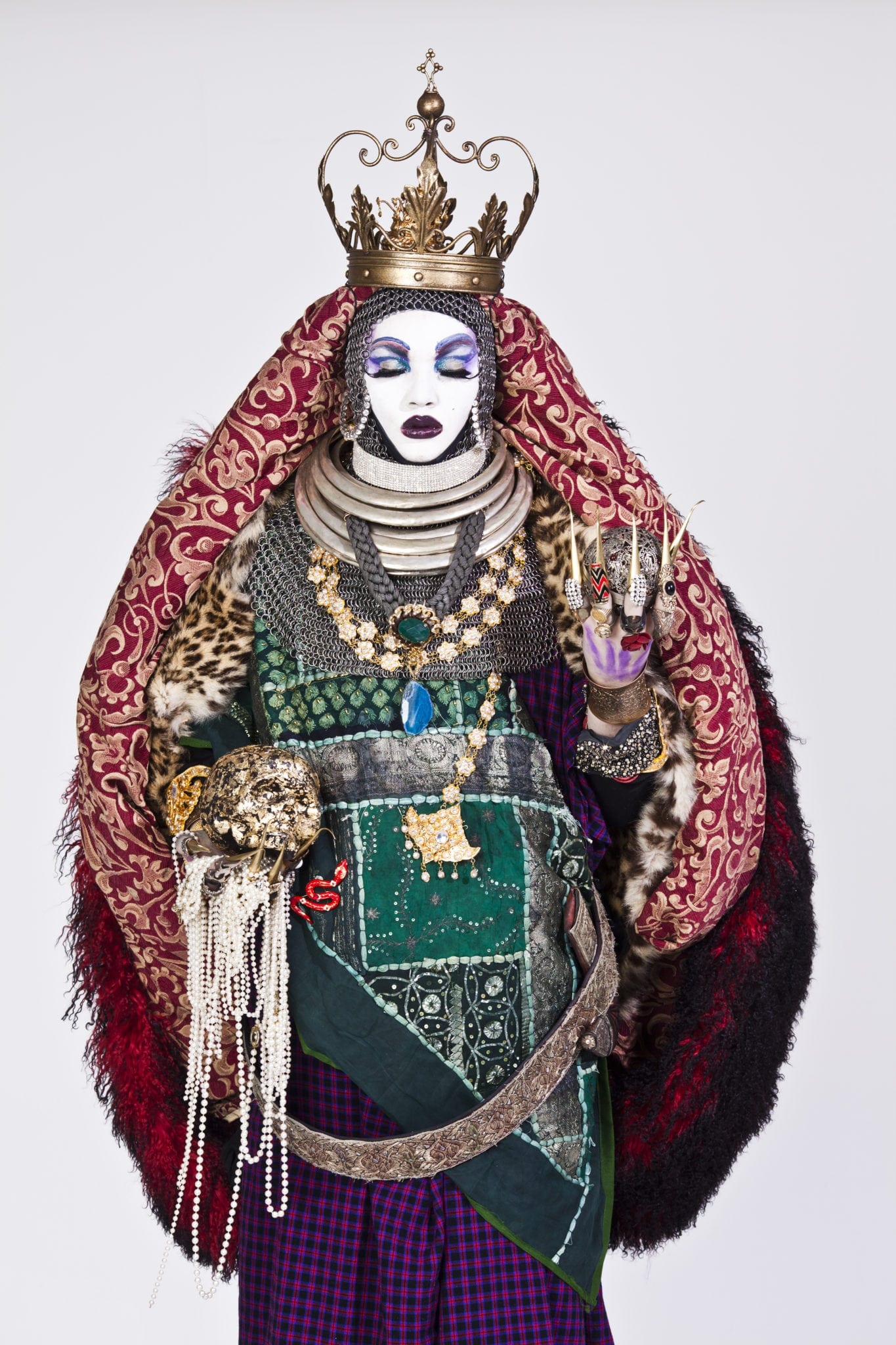 “If someone were to wear my clothes for a day they would learn that life like this isn’t easy,” Lismore once told a reporter for the East London Lines. “I am a walking target for absolutely all sorts of comments and behavior from nice people, horrible people — everybody.” Even in ordinary clothes, at 6 foot 4 inches tall and with striking, androgynous features, Lismore might still become the object of  attention, whether wanted or unwanted. One obvious choice for those whose appearance and personal style turn them into targets of abuse is to put on some form of camouflage, to protect the uncommon self by adopting a more ordinary appearance — Lismore chose a different path. He let the outrageous clothing and jewelry themselves become a form of defense, to bury his body protectively, at times, it seems, quite literally. To Lismore self-expression and self-protection are one and the same.

Lismore’s outfits often include elements of real armor and weaponry. Mongolian warrior helmets and Chinese armored gloves with glamorously long, claw-like nails are worn with couture dresses and handmade Japanese fabrics and Maasai jewelry and well, just about everything you can think of. There’s a sense of happy, hyperactive overload to Lismore’s aesthetic: often couture dresses are simply secured on the outside of other garments rather than “worn” in the traditional sense. Visually, it ends up seeming somehow both outrageous and perfectly fitting to wear an elephant mask with fishing nets and a Gaultier scarf. Hats are piled in stacks, and multiple, often discordant, influences impossibly coexist in the same outfit. So many are the clothes and accessories piled on each mannequin that “outfit” hardly seems the right word anymore — cocoon may be better.

Although Lismore’s style is resolutely singular, it paradoxically gives little indication of the interior realms other than that initiating sense of daring. The exhibition’s title “Be yourself, everyone else is already taken,” certainly rings true as an admonishment. But can the self become so hypnotically expressive, so protected and encrusted in its limitlessly detailed and communicative armor, that it becomes invisible? It’s something for SCAD students and lucky visitors to the delightfully strange show to contemplate. 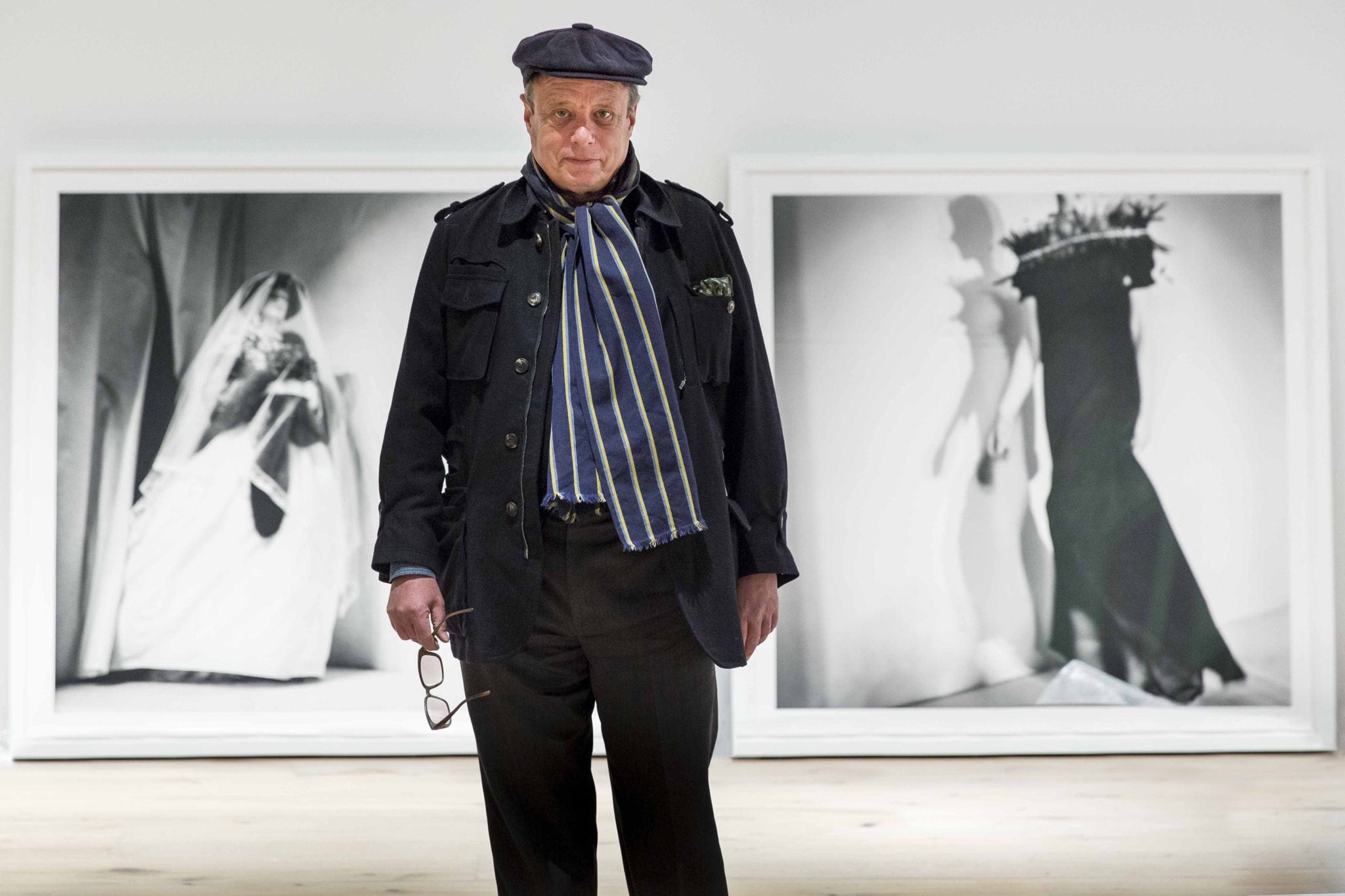 A parallel, if more subdued, sense of the Baroque tends to run through the concurrent and neighboring exhibition of images by Vanity Fair photographer Jonathan Becker. Subjects, such as Harper’s Bazaar editor Diana Vreeland, designer Oscar de la Renta and Dr. Jack Kevorkian, are pictured in their native habitats, so to speak, which Becker loves to capture in vivid, loquaciously elaborate detail. The 60 or so images represent a broad range of the photographer’s style and approaches taken over the 35-year span of his career. Like Lismore, he scours the globe for inspiration, and the collection, originally curated by designer André Leon Talley, covers a broad range, from early, lightning fast, paparazzi-style shots of the rich and famous to his more intimate and considered later portraits to landscapes and travel photography. As the photographer clearly seemed to learn from his early mentor, the Hungarian photographer Brassaï, whatever the subject, he conveys something of the interior by freezing complex things in seemingly vulnerable, almost dreamlike moments of simplicity and candor.

Present designs inevitably tend to steal the thunder of printed images, and it’s something of the case here. Moreover, Lismore’s designs seem very much intended to steal thunder, to capture and hold the attention by any means necessary. Still, it’s a functional, if curious, pairing: Lismore’s marching army of protective shells alongside Becker’s long record of doggedly bounding over the defenses and finding a way in.