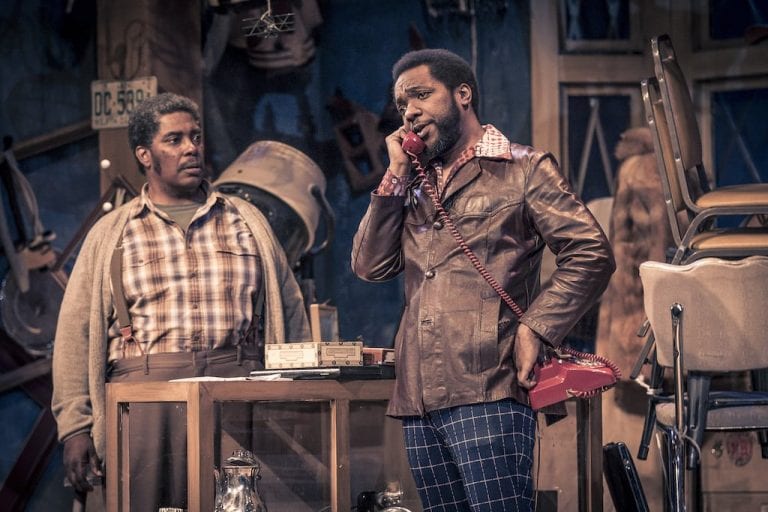 Neal Ghant (on the telephone) starred in "American Buffalo" and has become one of the city's most recognizable actors. (Photo by Daniel Parvis)

The value of a nickel is five cents, except for when it isn’t. As every collector knows, a coin can be worth much more than its face value depending on its age, rarity, condition and perhaps most importantly, who’s buying and who’s selling.

The changeable, subjective nature of things — a rare buffalo nickel is just one of them — is at the center of David Mamet’s classic 1975 three-man play American Buffalo, currently at True Colors Theatre Company through March 6.

In the show, Don (G. Valmont Thomas) owns a junk shop and in the opening scene, we learn that he’s recently sold a buffalo nickel to a savvy customer for next to nothing. He enlists the help of his teenaged assistant Bobby (Garrett Gray) to help him carry out a robbery in order to get the valuable coin back.

But soon enough, Don’s down-on-his-luck, hustling friend Teach (Neal Ghant) eases his way into the situation, pushing Bobby out of the picture and attempting to take charge of the scheme.

The play, which premiered at the Goodman Theatre in 1975 and ran on Broadway in 1977, was the play that first put Mamet on the map as a significant American playwright. Unsurprisingly, it features the tones and themes that came to be the hallmarks of his style: the hyper-masculine characters who struggle for dominance and try to find their way in a brutal, complicated world, using terse, imprecise but articulately vulgar language.

In spite of three strong performances from the leads and an enduring script, the production has trouble finding its tone, especially in the opening, which lacks tension and direction.

Things pick up when Don and Teach begin to plan the specifics of the robbery. But the enormous depths that should run underneath the surface of every scene remain elusive.

The actors speak the strange, inarticulate poetry of Mamet’s characters beautifully, and rare moments of tenderness and vulnerability are especially touching, perhaps too touching. In the end, Thomas’ Don seems more teddy bear than low-life, and somehow the play’s people lack the overall toughness and creepiness that make the machine work.

Teach’s final fit seems to come from nowhere, and in the end, we lack a crucial sense of connection to — maybe “repulsion from” is a better phrase — the characters. The particulars of the robbery itself, which never materializes as stage action, have somehow taken center stage, with the shifting relationships and values of the characters becoming almost peripheral.

The play ends on a touching, if somewhat bleak, note; it should be a surprising final destination considering the journey we’ve been on, but somehow in this production, we feel it’s exactly where things were always headed.