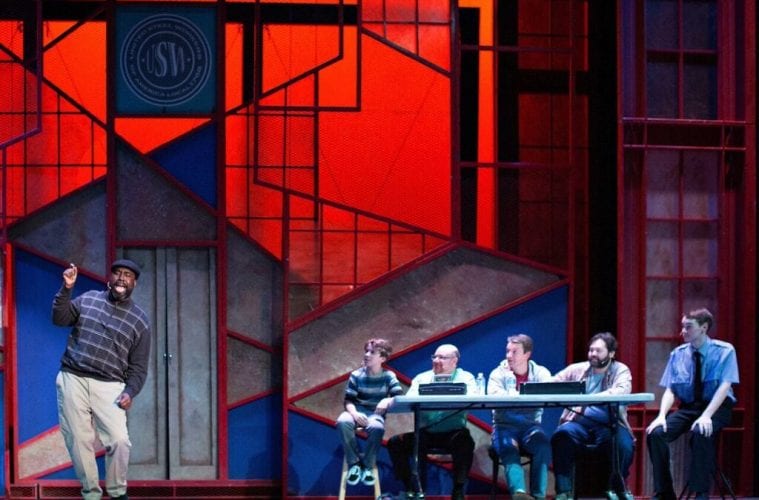 Review: Lyric Theater’s “Full Monty” is a crowd pleaser that teases, but doesn’t go all the way 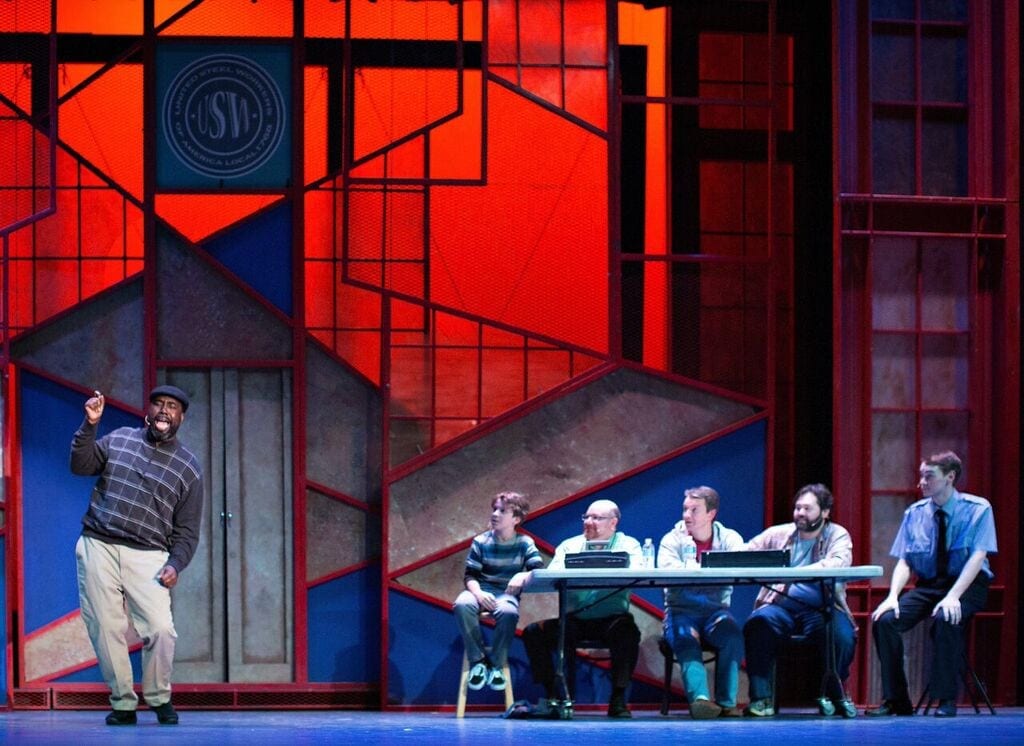 In the never-ending parade of hit movies that have become Broadway musicals, The Full Monty is an example of one that has firmly clicked, keeping the film’s spirit alive but adding a robust and varied score. The musical is getting its first local professional version (following a national tour back in 2004 at the Fox Theatre) courtesy of Atlanta Lyric Theatre.

Running through February 28 at the Jennie T. Anderson Theatre in Marietta, it’s a production that never soars but is generally pleasant enough.

In adapting the 1997 film, set in England, Terrence McNally moved the action to Buffalo, where Jerry (Jeff Juday) and Dave (Nick Caruso) are steelworkers who have become unemployed and are in need of cash. Weighing their options, and seeing how women go for a local strip troupe, they decide to stage their own show. With one difference — the G-strings will come off and the troupe will go bare.

The guys they pull together include Malcolm (J. Koby Parker), a security guard still living with his mother; Noah, aka Horse (Eric Moore), an aging and arthritic African-American man; Harold (Matt Lewis), who has been laid off as well but has not told his wife Vicki (Marcie Millard); and Ethan (Haden Rider), a goofy kid the auditioners seem almost willing to dismiss until he shows them a below-the-belt sea serpent that makes them reconsider. Collectively, however, they are no threat to the Chippendales clan.

Joining the group, almost out of nowhere, is Jeanette (Jackie Prucha) a seasoned showbiz type who accompanies the rehearsals.

On Broadway, The Full Monty had the misfortune of opening in 2000, the same season as Mel Brooks’ The Producers. Despite 10 Tony nominations, it lost them all in a year that saw The Producers set a record for Tony wins. It’s a shame, because in another year the production might have taken home a load of awards.

Certainly David Yazbek’s score is richer and more memorable than The Producers. In fact, the score is enough of its own character that it can overcome holes in a production.

It’s not easy casting this musical. The central actors have to be believable as everyday Buffalo workers, yet they have to be nimble enough as well to sing and dance. It works many times here in director Alan Kilpatrick’s version, but the one time it doesn’t is the Act I closer “Michael Jordan’s Ball,” in which the six strippers learn to bond as a troupe. A bit lackluster in its execution, it’s just not the showstopper it needs to be.

Many of the numbers here are agreeable enough without really becoming standouts. It’s really noticeable when a sassy, scene-stealing Millard appears and absolutely wipes the floor with anything that has come before in her number “Life With Harold.”

Mere minutes later, Moore appears and does the absolute same thing. His “Big Black Man” number — talking about the fantasy some women have about African-American men — is a funny song that is a comic, musical showcase for the performer. Were it not for Leslie Bellair’s virtuoso Act I closing bit in Horizon’s The Toxic Avenger, it would be the most inspired musical moment of the season.

Some of the other supporting actors do fine with the material. As Dave, Caruso is a likable presence who achieves some real poignancy as he weighs where he is in his life in “You Rule My World.” Rider’s good looks and six-pack abs don’t fit an everyday Buffalo chap looking for work, yet his vocal performance compensates, especially his duo with Parker, “You Walk With Me.”

Those ladies return triumphantly for “The Goods,” in which the guys imagine how the female audience will turn the tables and judge their physicality (“He’s fat, he’s old, he’s skinny, he’s bald, he’s short, he’s got pimples on his ass”).  Both numbers are highlights, with taut musical direction by Paul Tate and his orchestra.

Yet some casting issues really prevent this from becoming a terrific show. Prucha is a lovely, natural actress who has lit up many roles, yet she never feels right as Kathleen. Her big “Jeanette’s Showbiz Number” lacks juice.

While Juday is a highly capable vocal choice, he doesn’t altogether connect emotionally to the role of Jerry. By the end of the musical, the audience needs to be on his side, rooting for the six as they go through with their idea, but the actor keeps us at a distance.

Kilpatrick has directed the character of his ex-wife Pam (Lisa Manuli) to be strident and almost one note. Whatever affection and empathy exists between the two characters is negated here.

With gay content, non-family language and shades of skin, it’s not The Sound of Music. Yet it never becomes the production it deserves to be. Given the high level of craft that the Lyric showed with 2015’s Catch Me If You Can and Young Frankenstein, The Full Monty is a slight disappointment,

Rabid fans (myself included — I’m a major Full Monty snob who saw the original on Broadway with Patrick Wilson) may be a little underwhelmed but first timers should enjoy it. The production doesn’t go the full monty (in more ways than one) but it reveals enough to make it worth the trip.