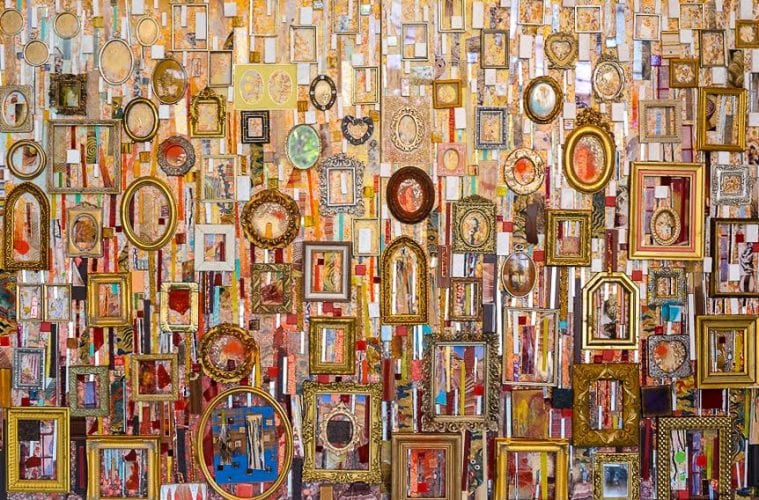 Review: Despite an abundance of objects, Lillian Blades’ work is far from chaotic

Rebecca BrantleyOctober 11, 2016
Art+DesignReviews
If you enjoy this story, or the other stories you read on ArtsATL, we encourage you to donate to our annual fund. By investing in ArtsATL, you are investing in the arts in Atlanta.
__

I recently visited September Gray’s Old Fourth Ward location — a relatively new addition to Atlanta’s gallery scene — on a sunny afternoon to see Lillian Blades’ Fractal Reflections (on view through October 21). I had the good fortune of running into the artist herself, who was manning the gallery and playing upbeat music as she worked on a new piece. Blades, a native of Nassau, Bahamas, and a longtime resident of Atlanta, offered to turn the music off, but I declined. It was pleasant and energetic, much like her collection of wall hangings.

Blades makes multimedia work from found objects — most of which are familiar, everyday stuff. In most of her works Blades utilizes painted blocks of wood mingled with other colorful materials: shards of tile, colored glass, or mirrors on a painted panel. These found objects are used like they are the tesserae of a mosaic — each adding color to the overall composition.

These assemblages share qualities with the American sculptor Louise Nevelson’s monochromatic reliefs and Antoni Gaudí’s eclectic mosaics. Like Nevelson, Blades transforms her material — often discarded junk — into rich surfaces. Yet, entirely unlike Nevelson, who often strictly adhered to all-black or all-white, Blades employs color to create mood and to unify the disparate objects. Perhaps it is her embrace of bright, intense hues that makes her work akin to Gaudí’s vibrant designs. 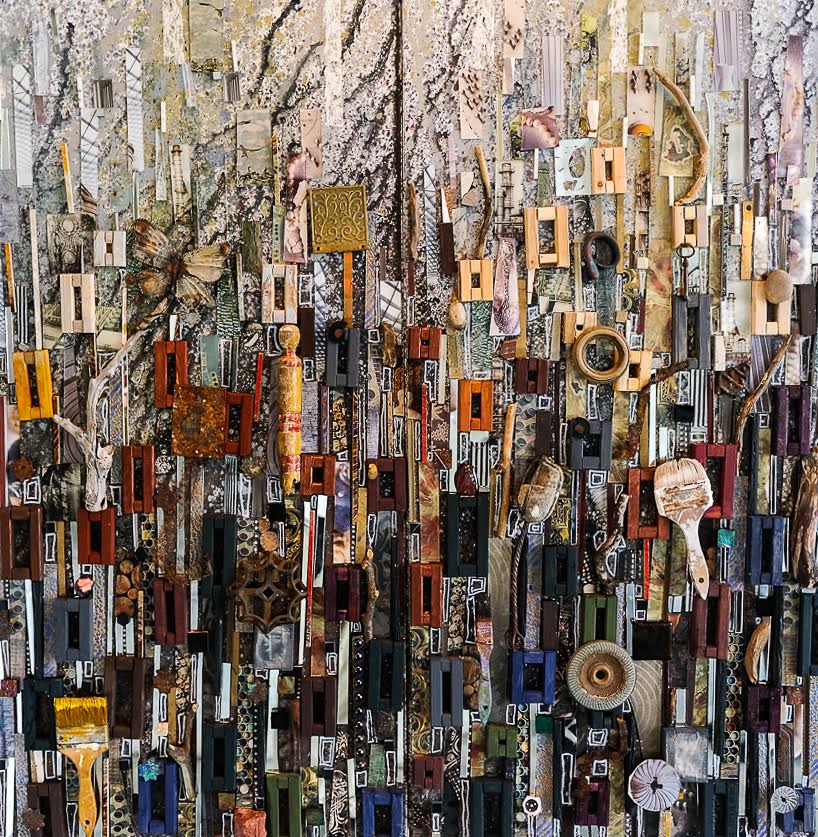 Many of Blades’ wall hangings have analogous color schemes, and most are made with painted wooden blocks that create a loose grid into which she incorporates a myriad of objects like old jewelry, empty picture frames, crystals and gemstones. One of the pleasures of looking at Blades’ work is finding unexpected things incorporated into the surface. For instance, some objects have special, autobiographical significance, to those with a careful and informed eye. Buttons, for example, reference her mother’s career as a seamstress. Slivers of plastic PVC pipe allude to her father’s career as a plumber.

Many works have oceanic themes and allude to her upbringing in the Bahamas, where she returns at least once or twice a year. Sun & Water alludes to the way the sun’s rays fall on water: goldenrod yellow transitions to azure and flecks of broken glass mimics the way water refracts light. Bahama Seashore I boasts a myriad of variations of blue. Its richest, most saturated hues are accumulated at the bottom of the composition; paler iterations appear in the painting’s upper portions. In this work, a chunky carpenter’s pencil covered in a blue pattern of bubbles blends, chameleon-like, into a busy accumulation of patterned and marbled swatches.

Variations on red and russet fade to vermillion and flecks of gold in Windows of Reflection. Empty frames cover the surface so as to create a pattern of rectangles, ovals and the occasional heart-shaped frame. Blades told me that this work was inspired by Byzantine and Renaissance art, and though this piece has the scale of an altarpiece, it’s perhaps more like opulent pietra dura designs of the Italian Renaissance or Byzantine mosaics that inspired her. Blades also mentions the significance of mirrors. Fragmented, they reflect the viewer and momentarily insert a figure into the composition. For Blades, this suggests presence and encourages one to embrace the moment. 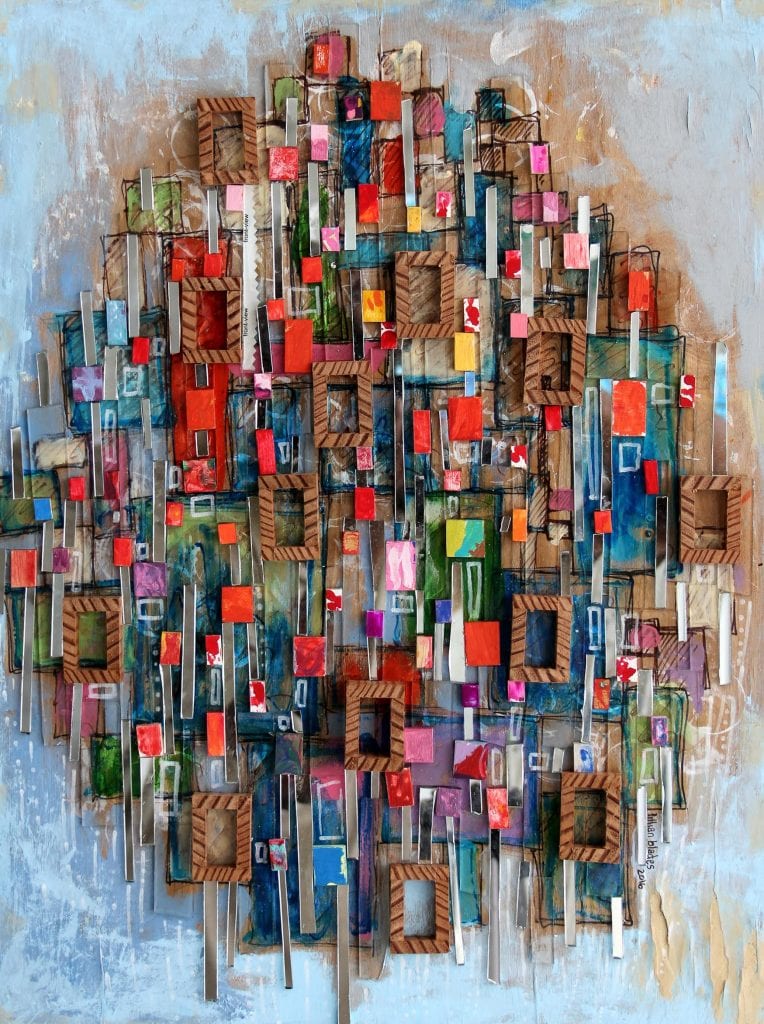 Chrysalis features a significantly dulled palette that evokes the corroded surface of a rusted tin roof. For such a work, Blades confided that she had to buy tubes of black paint — despite an impressive inventory of art materials. Old paintbrushes are incorporated into the surface, and a branch with a butterfly refers to the title and suggests the cyclical nature of life, that is, the notion of birth coming from decay.

Occasionally, Blades’ work defers to cliché — a starfish and shells in Seashore I and Seashore II, for example. Blades’ work is at its best when it moves away from the literal. Near the front door is Vanity, a mirror frame painted white and covered in small objects. The work deals with personal loss in Blades’ life, but the casual looker will likely remain unaware of this. The hues are soft and rococo; the pieces of mirror are interwoven so as to create a shimmering effect. The result is an effervescent and prismatic exploration of color.

Blades’ assemblages function as inventories of the mundane ephemera and will no doubt appeal to those who love flea markets and junk stores. Her work is imbued with a collector’s — dare I say hoarder’s — love of things. Yet despite the cacophony of objects, there’s a rigor to her work that is anything but chaotic. In her most successful works, individual objects seem seamlessly woven into the whole in the service of lyrical color and pattern.