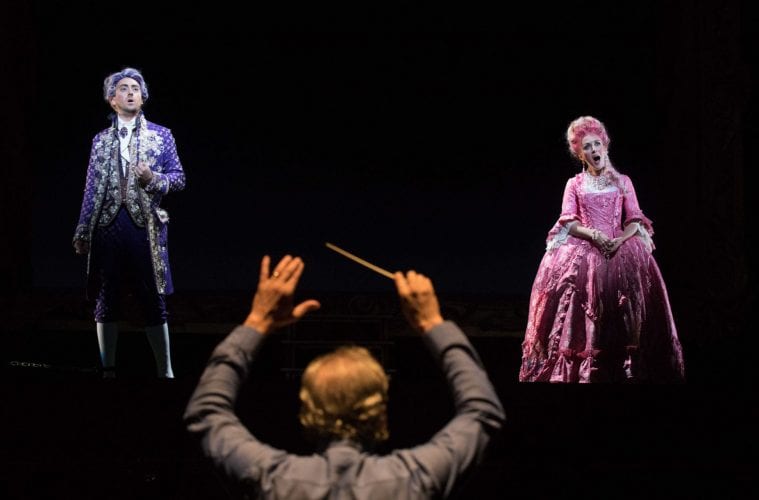 Review: The Atlanta Opera opens season with Mozart’s “Abduction From the Seraglio”

The Atlanta Opera opened its 2016-17 season on Saturday night with a performance of Mozart’s The Abduction From the Seraglio at the Cobb Energy Performing Arts Centre. Three performances remain in this production’s run, on October 11, 14 and 16. The opera is a “singspiel” — with both singing and spoken dialogue — and music director Arthur Fagen conducts. Making his Atlanta Opera debut as production director is Chris Alexander, who also provided the English dialogue.

The opera tells the story of a Spanish nobleman, Belmonte (Ben Bliss), who travels to the heart of the Ottoman Empire to find and rescue his betrothed love, Konstanze (soprano Sarah Coburn), who was captured by pirates and sold as a slave to a wealthy Turk, Pasha Selim (a spoken role, played by Tom Key). Also sold to the Pasha are Belmonte’s servant Pedrillo (tenor Matthew Grills) and Konstanze’s English maid Blonde (soprano Katrina Galka). In order to escape, the four Europeans must outwit their captors, especially the antagonistic if comic Osmin (bass Kevin Burdette), who oversees the Pasha’s harem.

Of those six performers, all are making their Atlanta Opera debuts, save Burdette, who played the Pirate King in last season’s production of The Pirates of Penzance. He likewise plays Osmin mostly for full-out comedy with his exaggerated, stylized gestures, at times to the level of silliness, using his whip as a jump rope in an extended episode of glee.

Surprisingly, one of those with debut status is Key, whose presence on Atlanta’s theatrical stages is legion, and he makes an impressive showing as Pasha Selim, in a range of emotions from thwarted passion to anger and finally a sober wisdom. The entire cast, however, makes for a well-balanced ensemble.

Bliss has an effective, lyrical tenor — suited for the arias of love lost and found — in the mostly straight-man romantic lead of Belmonte. Grills lends the more malleable side of his tenor voice and acting to his comic Pedrillo. Coburn’s agile soprano handles the many rapid passages of Mozart’s legendary “too many notes” sublimely. Galka has her share of acrobatics, especially in her contention with the crudely amorous Osmin.

The opera’s Overture makes a concise platform for telling the backstory, with the help of the simple but clever abstract set. A gigantic gilded picture frame set in a dark gray show portal serves as a projection screen. Upon entering the hall, the audience first sees a flickering black-and-white image of a Turkish structure, emulating a worn celluloid film reel.

As the music of the Overture begins, with Fagen’s orchestra playing in top shape all evening, the backstory is told as if in a silent movie. The mix of title cards and partially animated illustrations resembles less the early style of Terry Gilliam than the cut-and-paste feel of David Malki’s Wondermark comics, but without the re-contextualization of either. Later in the opera, we see that the projection screen is a temporary front for an upstage platform on which action also takes place, often spilling over into the main mid and downstage areas.

The live action begins with Belmonte arriving at the Pasha’s palace, comically evading Turkish guards with pikes, then disguising himself as a Turk. In the process, he encounters Pedrillo, who informs him that Konstanze and Blonde are also there, safe, but prisoners in the Pasha’s harem. Of course, the Pasha has fallen in love with Konstanze. Osmin is likewise smitten with Blonde. Pedrillo, in good favor with the Pasha Selim, introduces Belmonte as a European architect who wishes to place his skills in the wealthy Pasha’s service, to get him inside the palace where the two can attempt to rescue the ladies.

They are, however, caught in the act and in a petition to buy their freedom with money, Belmonte reveals himself to be the son of Count Lostados, commandant of Oran, but to no avail: it turns out Lostados is Selim’s cruel archenemy.

The protagonists are prepared for the worst from the Turk, but they (and certainly the audience of Mozart’s day) get an unexpected shock as the Pasha announces: “I despise your father far too much ever to behave as he did.” He sets all four free, admonishing Belmonte to tell his father that it is a greater deed to repay injustice with kindness than return cruelty with cruelty.

In the final chorus, the Pasha moves to center stage and sits quietly facing the audience, while a still agitated Osmin, who wished retribution, is herded off by the chorus of Turks. Belmonte and his entourage leave by way of the upstage picture frame, but Konstanze returns momentarily, hesitating, with a look of compassion at the Pasha, who does not see her. She then makes her final departure.

The Pasha rises and moves to the upstage area, facing the back, as if to watch the Europeans make their way to Belmonte’s ship. Quietly, Osmin appears next to the Pasha, also looking away toward the departing ship, and moves to a step below him. In a final, subtle but brilliant piece of stage direction, the Pasha places his hand on Osmin’s shoulder. As the stage fades to black we are left with the impression that even the heart of Osmin is redeemable.

[Editor’s note: The Atlanta Opera has invited anyone displaced by Hurricane Matthew to see The Abduction from the Seraglio for free. Tickets are available at the Cobb Energy Centre beginning two hours before curtain; bring a valid ID from an impacted city or town to receive two free tickets.]