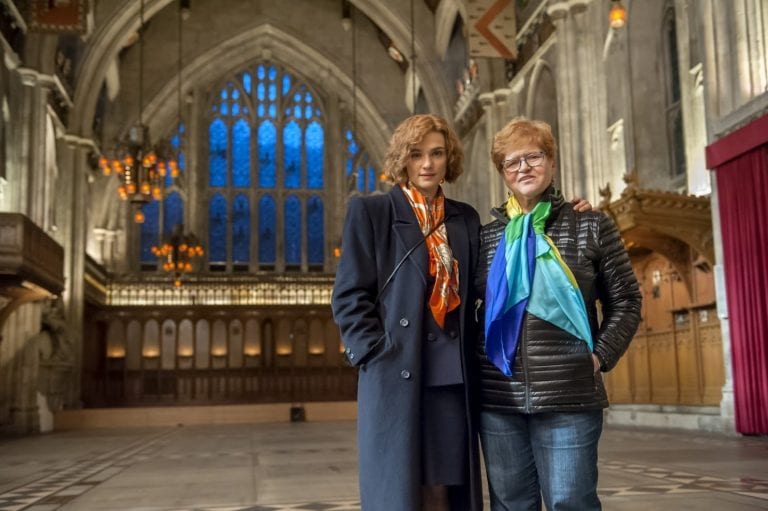 News: Emory’s Deborah Lipstadt on “Denial” and seeing Rachel Weisz play her on the big screen

As the closing credits of the film Denial came to a sudden halt and the house lights went up at the Tara Theatre Saturday night, the near-capacity crowd burst into applause as Emory University professor Deborah Lipstadt dashed down the aisle.

The film they’d just watched is based around a libel suit filed against Lipstadt by a prominent Holocaust denier that put the very existence of the Holocaust on trial. Lipstadt, a professor of Modern Jewish History and Holocaust Studies at Emory, is portrayed by Oscar-winner Rachel Weisz.

“It’s an out-of-body experience to see yourself portrayed on film,” Lipstadt told the crowd. “A year ago, Rachel and I spent a couple of days together. After that, she called often during the filming and we’d Skype.”

There was one afternoon when Lipstadt visited the set. She heard stagehands asking where they could find “Deborah’s glasses.” It took her a moment to realize that it wasn’t her glasses they were looking for — she happened to be wearing her glasses — it was the glasses Rachel Weisz was supposed to wear.

The film chronicles the 1996 libel lawsuit brought against Lipstadt by David Irving, a British historical writer who specializes in Nazi Germany. Irving claimed he was libeled in Lipstadt’s book, Denying the Holocaust: The Growing Assault on Truth and Memory.

Denial opens with a scene where Irving, accompanied by videographers, crashes a guest lecture that Lipstadt gave at what is now Georgia Perimeter College. Irving dramatically stood up and challenged her to debate him about the existence of the Holocaust. “I felt like a deer in headlights,” Lipstadt said Saturday. “I don’t debate these people. There are not two sides to every argument. There’s a difference between facts, opinions and lies.”

In her 25-minute talk, Lipstadt offered numerous tidbits about the filming process. She said Timothy Spall, who portrays Irving, had the most difficult challenge because he had to portray Irving as a man who believed in his cause, however misguided. “He couldn’t play David Irving as despicable,” she said. “He had to inhabit the role without showing his own revulsion with David Irving.”

A strong team was put together to produce Denial. Weisz received a Best Supporting Actress Oscar for her role in The Constant Gardner. Director Mick Jackson helmed 2010’s HBO biopic Temple Grandin and screenwriter David Hare wrote the screenplays for The Reader and The Hours.

Hare choose to focus on the drama between Lipstadt and her British lawyers; she had demanded to testify in the trial, but her lawyers wanted Irving to hang himself without Lipstadt ever taking the witness stand. “That was heightened somewhat, but the screenwriter needed a dramatic arc and that could never be the dramatic arc of David Irving,” she said. “I did have to learn to trust the lawyers and cede power to them.”

According to Lipstadt, considerable effort was made to entice Hare to write the screenplay. “We met with him three or four times in London before he agreed to do it,” she said. “He was reluctant to do a Holocaust film because you can’t get near to the real trauma they suffered.”

But the most memorable parts of Denial are the somber scenes filmed at Auschwitz when Lipstadt and her lawyers visited the site. Drenched in fog with the ground covered in a light coat of snow, the vividly drawn scenes are a stark reminder of what the film is really about.

The undertone of the film is how — in this age of the internet and social media and cable news — lies can become the truth, and the truth can become lies. It’s a reminder of the adage promulgated by German Nazi propagandist Joseph Goebbels that “if you tell a lie long enough and often enough, it becomes the truth.”

“The internet is a knife,” Lipstadt said. “A knife in the hands of a killer is lethal. A knife in the hands of a surgeon saves lives. The media has to do a better job of challenging lies: 9/11 conspiracies, Sandy Hook, Brexit. Elie Wiesel said that in the face of evil, there is no neutrality. You have to be willing to be the unwelcome guest at the dinner table.”

In an effort to combat misinformation, Lipstadt and Emory have created the Holocaust Denial on Trial website that features documents from the trial, including the judge’s decision.

Lipstadt said her one regret about the film is that it didn’t show the support she received from the university as her case went to trial in London. “The provost wouldn’t give me a sabbatical or leave of absence,” she said. “Instead, they reduced my teaching load and gave me time off to go to London. He said the courtroom was my class now, and that they would learn from me from afar. That was a class act. They even set up a fund for my travel expenses.”