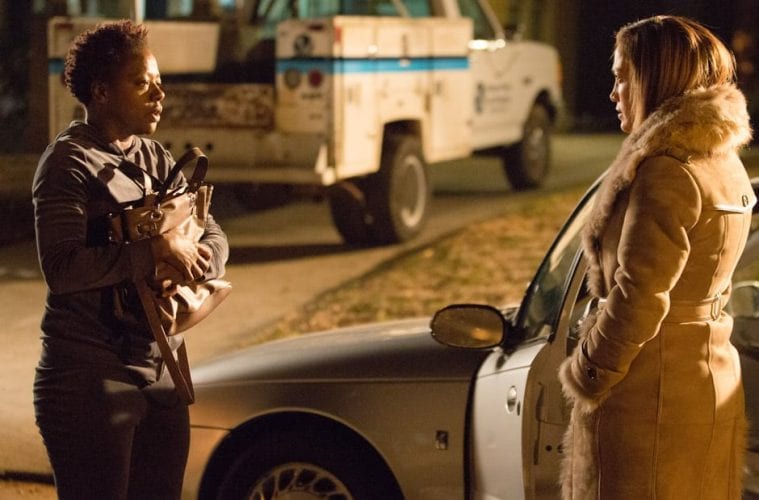 Review: “Lila & Eve” a predictable film that wastes the talents of Viola Davis and J-Lo I could watch Viola Davis do just about anything. She gave The Help a gravitas that the (enjoyably) specious movie didn’t deserve, and she emotionally grounds the whiplash melodrama of her TV show, How to Get Away with Murder. In other words, we’ve gotten used to watching her elevate material that’s beneath her.

Add to the list Lila & Eve, notable mainly for being shot and set in Atlanta, and for giving Davis and Jennifer Lopez a couple of juicy, sub-Thelma & Louise roles (note the shared ampersand in the movies’ titles). Otherwise, this revenge thriller, a selection at this year’s Sundance Film Festival, is pretty much junk.

Davis’ Lila is a single mom whose adult son Stephon (Aml Ameen) has been killed in the cross-fire of a drug-related drive-by. The more interesting minutes of the movie unfold near the start. Virtually crippled with grief and medication, Lila would probably remain shut up in her dark bedroom if not for the concern of her younger, surviving son, Justin (Ron Caldwell). Also trying to get her back on her feet are the members of the support group she drags herself too — women who have also lost children in various ways.

But as they talk about the need to find acceptance, “so you can get on to living,” Lila’s eyes wander the room and light on Eve (Lopez, decent), a silent, glowering presence in fur and leather who seems as seethingly disdainful of this warm-hug vibe as Lila herself is. Like recognizes like. These two women don’t want to accept. They want to get even.

Lila has given up hope for official justice. At the police station, trying to learn if the detectives are even attempting to find her son’s killers, Lila glimpses a bulletin board dedicated to the investigation of another young murder — of a blond, female, cheerleader type. By contrast, the cops on Stephon’s case (Shea Whigham and Andre Royo) can’t seem to remember the boy’s name, or Lila’s.

So, Lila and Eve decide to take the case (and a gun) into their own hands. Thus begins an implausible demonstration of “girl power” as exercised by putting bullets in the heads of various stereotypical drug dealers. Afterward, the two cops keep reappearing, scratching their heads over the accumulating corpses and trading sub-Law & Order banter. (At least Whigham and Royo always had better dialogue on their respective HBO shows, Empire Boardwalk and The Wire.) Meanwhile, bloodshed is helping Lila get her groove back; she even starts a fling with the neighbor who has been goo-goo-eyeing her for years.

Well, and then comes the big third-act twist, derived from a couple of popular movies from the 1990s (back when such plot whammies had some power). The only surprise this one has is the possibility that anyone in the audience hasn’t figured it out by the half-hour point. It turns an already weak movie into something downright laughable.

Speaking of laughs … as much as I love Viola Davis, I’m starting to wonder. She’s fantastic at nailing deep, tormented characters. But do you think we’ll ever get to see her go the other direction and really let loose in a comedy?