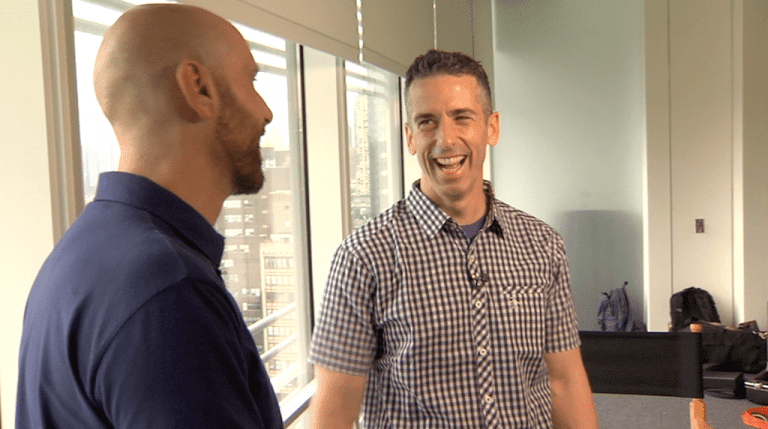 Thorpe, left with Dan Savage, in a light moment from Do I Sound Gay?

Preview: Filmmaker David Thorpe to speak Sunday about his documentary “Do I Sound Gay?”

David Thorpe, a Brooklyn-based journalist and filmmaker, was on a train to Fire Island five years ago when the inspiration struck for his new documentary Do I Sound Gay?

It was the start of the summer season, he was headed for the beach and his fellow passengers’ excitement over their destination was especially heightened. But instead of sharing their enthusiasm, Thorpe recalls “cringing at this cacophony of shrill gay voices around me.”

Though “newly single, on the wrong side of 40 and in the midst of a mid-life crisis,” as Thorpe puts it when reached by phone, his out-of-character response in real time left him wondering how he’d wound up so alienated from his community and himself — a gay man who’d been out for 25 years.

Thorpe wondered if his adverse reaction to the stereotypical “gay voices” stemmed from internalized homophobia, and he resolved to change what he did not like about his voice “the way people go to the gym or get plastic surgery” to correct what they perceive as flaws.

In spite of his fear of becoming a pariah among friends, Thorpe started asking pointed questions about the elephant in the room: “Why do we all speak in the same ‘gay’ way? Is it innate? Learned? Healthy appropriation or acquiescence to a stereotype?”

That epiphany sparked Thorpe’s new film that opens tonight at Midtown Art Cinema, Do I Sound Gay? He will host a question and answer session following a 7:15 screening of the movie on Sunday.

To answer these questions in the film, Thorpe enlisted the help of friends, strangers, linguists, historians and such beloved celebrities as activist, author and media pundit Dan Savage, humorist David Sedaris and fashion icon Tim Gunn.

“I modeled my speech after the women I grew up with,” he says. “I love those women. So it was refreshingly natural to make the next logical leap: there’s nothing to be ashamed of.”

Savage helped Thorpe take a giant leap by reflecting on the potential for lasting trauma when a child’s development is stymied by code-switching, self-consciousness and self-censorship. “When you are gay, young and closeted and trying to pass, you police yourself for evidence that might betray you,” Savage says. “It’s how you walk and talk. Many gay adolescents are absolutely right to be worried about how they sound because it draws violence.”

The fact that Savage never felt shame about being gay, in spite of growing up in a very homophobic era, is what makes him a hero to Thorpe — who was a far more cautious child. “I was never trained to be aggressive or authoritative,” he says. To the contrary, until the age of 12, Thorpe remembers being “very flamboyant.”

But all that changed when his social cues shifted. In middle school, he was taught what it meant to act like a boy. “I stopped being expressive with my voice and I spoke a lot less,” he says. So much so that he sums up his adolescent modus operandi as: “I’ll just be quiet and no one will know that I’m here.”

Interviews with comedienne Margaret Cho and CNN’s Don Lemon reveal striking parallels in the ways members of other minority groups learn to adapt and minimize aspects of their personas through linguistics. Cho’s determination “not to sound Asian,” was informed by the deep shame she says her Korean father felt due to his heavily-accented English. Lemon consciously clipped his languorous Southern drawl after becoming a broadcast journalist, for fear that his Louisiana accent might make him sound “lazy” to viewers.

Of course, there is inherent danger in altering one’s speech — which is inextricably linked to identity — to avoid being stereotyped. But there is also power, according to Thorpe, in flipping the script and appropriating the very terms that might be used against you. “One of my goals was to destigmatize the slur ‘that’s so gay’ by turning it around so that ‘sounding gay’ no longer meant stupid, or bad, or silly or worthless,” he says.

In this respect, the youngest subjects of Do I Sound Gay? stand out for their courage, defiance and unwillingness to allow others to define them. In one particularly wrenching scene, we witness Zach King — a Chillicothe, Ohio, high-schooler — being beaten savagely by a homophobic classmate in a video clip that was recorded and then went viral.

We then get to meet King — who is unbowed by the pressure to conform to straight, male norms. Social media sensations like Tyler Oakley, Kingsley and Lohanthony — who have over 10 million YouTube subscribers between them — also make cameos in the documentary.

They are, says George Takei, the actor widely known as Hikaru Sulu from Star Trek, “pioneers in [their] time…changing societal perceptions of what it means to be gay.”

Film historian Richard Barrios says Millennials have traveled light years from his days as a child when gay people were either invisible, butts of jokes or menacing presences in TV, film and popular culture. Citing villains from such seemingly benign Disney films as The Lion King, The Jungle Book and Peter Pan, Barrios makes the case that “many of the sinister characters possessed proto-gay qualities — snide, supercilious and superior — which could persuade very young children that villains or evil could be connoted by a gay, male voice.”

Do I Sound Gay? is rife with important insights, poignancy and gravity. But it also offers laugh out loud moments when Sedaris and Gunn — never at a loss for words or witticisms — deliver sound-bite gold.