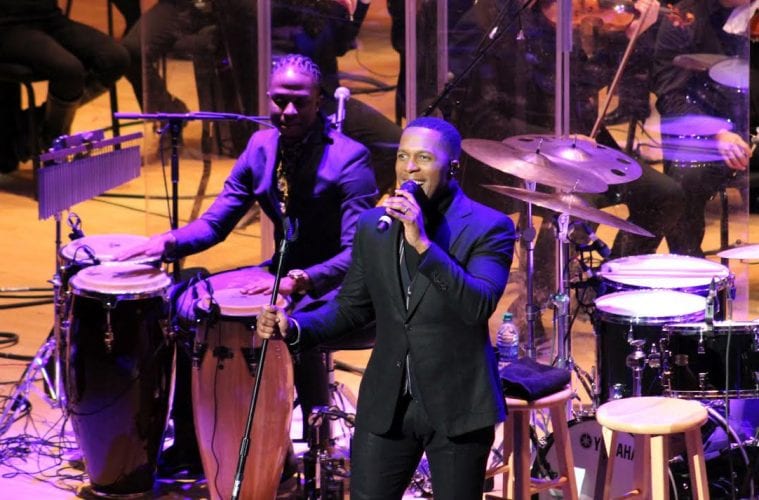 With the end-of-year holiday season now in full swing, singer-actor Leslie Odom, Jr., who originated the role of Aaron Burr in the mega-hit Broadway musical Hamilton, set the Christmas fires aglow with a concert Wednesday night at Symphony Hall. Odom and his band were up front on the stage, with an acrylic wall between them and members of the Atlanta Symphony Orchestra, who were seated upstage behind the transparent acoustical wall. The orchestra was led by Albert-George Schram, who conducts summer pops concerts for the Charlotte Symphony in North Carolina.

Although absent printed programs for the audience, it was nevertheless a carefully scripted and easy-to-follow show, with good pacing and flow. The orchestra primarily provided “sweetening” to the arrangements, and the downstage band was solidly expert in the ranging selections. The centerpiece was definitely Odom’s mellifluous, buttery-smooth voice. Its clear, appealing timbre combined with Odom’s astute, flexible musicianship made listening to the well-chosen repertoire a joy throughout the span of the single 75-minute set.

Although later in the show Odom suggested to the audience that he might not have been at the top of his game that night, you wouldn’t have known it just from listening to his performance.

Odom opened with the holiday classic “The Christmas Song” to set the tone for the evening. Better known by its subtitle and opening words, “Chestnuts Roasting on an Open Fire,” the 1945 evergreen by Bob Wells and Mel Tormé hearkened back to an era in pop culture when heartwarming American songs for the season were at their apex. Odom then segued into The Carpenter’s pop “Merry Christmas, Darling,” followed by “Winter Song” by Ingrid Michaelson and Sara Bareilles. All three songs appear on Odom’s 2016 Simply Christmas album.

It was only then that Odom stepped out of Christmas mode to do what many in the audience were waiting for: a number from Hamilton. He performed “Wait for It,” a song that’s sympathetic to Burr’s brooding jealousy over Alexander Hamilton’s political successes.

Odom immediately turned back to a holiday theme with “The Christmas Waltz,” a number written for Frank Sinatra by Sammy Cahn and Jule Styne, which became the B-side track for Sinatra’s hit “White Christmas” single. Next, Odom sang “My Favorite Things” from The Sound of Music.

The show then shifted to one of Odom’s artistic inspirations, a medley of songs from the oeuvre of Nat King Cole: “Nature Boy,” “Mona Lisa,” “Straighten Up and Fly Right” and “Unforgettable.” The show returned to the theme of holiday favorites with the “The First Noel,” the traditional Scottish new year’s song “Auld Lang Syne” and “Have Yourself a Merry Little Christmas.”

Odom waxed paternal with a thematically related pair of songs: Bob Dylan’s “Forever Young,” a lullaby that relates a father’s hopes for his child’s strength and happiness, followed by a final Hamilton song, “Dear Theodosia,” a heart-breaker of a ballad that Burr sings to his new daughter with a promise to fight to make the world better for her.

Two more numbers remained: a gently glowing rendition of Franz Schubert’s classical “Ave Maria” followed by a decidedly non-Christmas jazz standard from 1930, “On the Sunny Side of the Street,” which ended the evening on a cheerful, upbeat note.