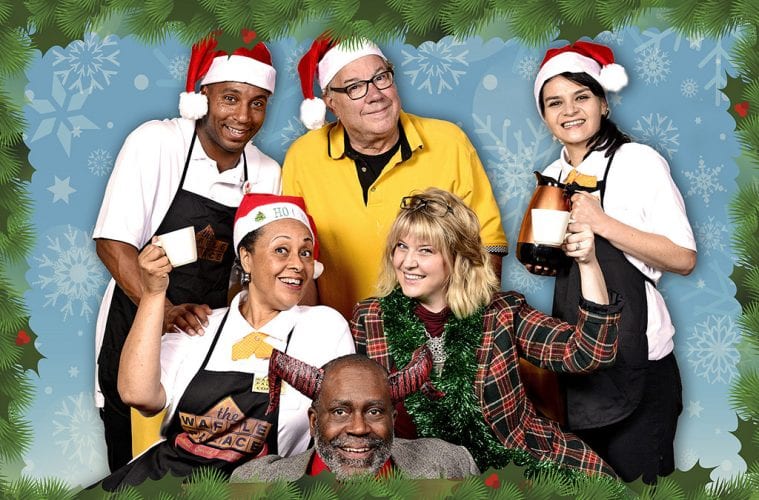 Atlantans know that come rain, sleet, hail or even the occasional snow, they can always rely on Waffle House for a greasy, filling, affordable meal. The always-open nature of the diner makes it a people-watching dream — it’s possible to observe first-shift workers, tipsy clubbers and kids after prom in the same moment. The lure of the place is what drove Larry Larson and Eddie Levi Lee to write the stage spoof The Waffle Palace back in 2011. It was a runaway hit for Little Five Points’ Horizon Theatre Company, so much so that they remounted it in 2012, 2013 and 2015.

So it’s no marvel that after 20 years of staging David Sedaris’ The Santaland Diaries, when the theater was looking for a new option for the holidays, going back to the Waffle Palace seemed natural. The original production is about the staff at a charming diner that finds itself in upheaval when developers break ground on high rises in their backyard. The staff is more like family and consists of the diner’s owner, John (Barry Stoltze in the role originated by Larson), spitfire waitress/manager Connie (Marguerite Hannah), waitress Esperanza (Maria Rodriguez-Sager) and a gaggle of eccentric patrons, most memorably camo-clad Bubba (Allan Edwards) and Tooty (Lala Cochran).

Waffle Palace Christmas finds most of the same characters a few years later, but this time with the addition of Alex (Jennifer Alice Acker), a millennial blogger who uses the diner’s free Wi-Fi — audiences will recognize her from Horizon’s Freaky Friday — and new grill master/Connie’s nephew Deandre (Markell Williams). And then there’s Krampus (Rob Cleveland), who is hoping he can prey on Connie and John’s conflicting ideas on how to solve the diner’s financial troubles to stir up discord. With a strong cast, the hyper realistic setting designed by Isabel and Moriah Curley-Clay and Atlanta’s unwavering love of Waffle House, it seems like a slam dunk. 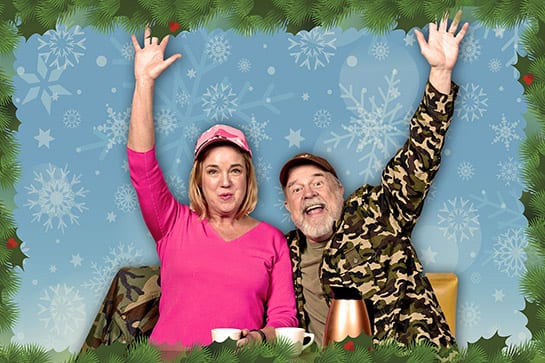 Unfortunately, this new production, helmed by Horizon’s producing artistic director Lisa Adler, doesn’t make use of the seasoned talent onstage and sacrifices story for Krampus hijinks. The opening number is cheesier than necessary for an already campy show and is more about getting ready for the holidays than actually setting up the action of the play. The characters’ motivations are barely contrived at best; John is afraid that social media will make people disconnected from each other, while Connie thinks social media will bring people into the diner — surprise, they’re both right. Deandre really wants to be an artist (and date Alex), but there’s no reason for either desire. Esperanza has been away after she and her husband won the lottery, but now he’s working at UPS and they have a baby on the way. How did this happen? There’s a veteran living on the roof, and they just let it happen. The most fully formed characters in the whole play are Bubba and Tooty, and they’re only onstage for a combined total of maybe 15 minutes.

Cleveland is miscast as Krampus, which is unfortunate for such a heavy-hitting actor who just lit up the Theatrical Outfit stage in The Royale. Krampus comes in the form of a health inspector and a cranky lawyer who burns waffles and creates a fake YouTube channel with “customers” talking about finding roaches and dirt in their food. As funny as the plastic roach was, Krampus is out of place in the play altogether. Sitting in the audience, it became quite clear that every time the audience got hooked into the story of these people who formed a family against the odds, Krampus appeared, but not in a good way. You could almost hear the sighs from the audience every time a sentimental moment got smothered.

What made The Waffle Palace so endearing is that it was more about the characters’ journeys and less about the diner, and with Krampus taking attention away from the heart of the play, there’s not much left. The actors in this show are some of the city’s best, but they are not able to show that off here. Farce is fine when it’s backed by a good story, but this is like watching a bad sketch comedy show.