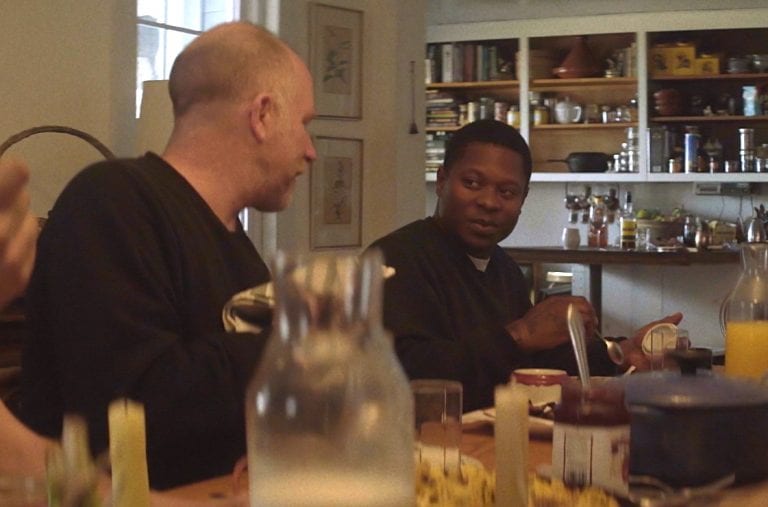 Jason Mitchell stars as the lone black man on a getaway with a group of friends. (Photo courtesy Magnolia Pictures)

On paper, at least, it seems innocuous enough — a weekend full of alcohol and fun with friends. The getaway goes a bit awry in the new film Tyrel. Starring Atlanta actor Jason Mitchell, it’s the latest feature by Sebastian Silva, looking subtly at race relations. Mitchell will be in attendance at the local opening night of the film Saturday night at 7 p.m. at the Plaza Atlanta theater.

In the film, Mitchell plays Tyler (called Tyrel by one of his friends), who finds himself out of place on a birthday trip to a Catskills cabin during Donald Trump’s inauguration. A black man, he finds himself surrounded by an all-white gathering, and matters get somewhat uncomfortable for him.

A New Orleans native, Mitchell now makes Atlanta home. “Before the storm, we’d always visit Atlanta because we saw black people who looked like us and were actually doing it,” he says. “To come here, it was motivation. Unfortunately for black people, I feel like our main problem is being uneducated. We’ve fought for rights to be educated, but it’s not even cool to be educated in the black community at times. Atlanta is definitely changing the shape of that.”

Straight Outta Compton in 2015 was a breakthrough for the actor, who was praised for his work as rapper Eazy-E. Last year was an even more substantial turn in Mitchell’s career, with key roles in Kong: Skull Island, Detroit and the Oscar-nominated Mudbound. Next up is Unstoppable: The Anthony Robles Story, based on the real-life story of a man born with one leg who became an NCAA wrestling champion.

One of the attractions of the Tyrel script for Mitchell is that the film tackles America’s racial divide but does it with a feather rather than a hammer. “Tyler is like so many people who just want to work their nine-to-five and want to live their best life and try to live in the best country in the world the best way they know how,” Mitchell says. “Everyone can relate. No one is getting stabbed, there are no explosions, no boom, but it’s like watching a horror film. For the entire film you are afraid for him, being in a young black man’s shoes in America.”

Another aspect of the film is Tyler’s feeling of alienation. He’s not only the lone black person at the gathering, he’s not a member of the group of friends. “You slowly watch him go through that and try to adapt, while consuming a lot of alcohol,” Mitchell says.

During the weekend getaway, one of the white men — during a game — suggests someone else attempt a black accent. Many of the attendees think nothing of it, but at least one realizes the awkwardness. Later, Tyrel is able to strike up a bond with another weekend partier, played by Michael Cera. “You see that relationship between me and Michael, a black guy and a white guy, who can talk about their differences and laugh about them and become good friends,” Mitchell says. “Optimistically, I think that is where America wants to head.”

He knows race relations are in a rough spot in the country, but Mitchell does see some positives. “Especially with Trump in office, we are coming to a hub,” he says. “Racial bigotry is just acne, and we are trying to clear the face so we can see it for real. Things have to come to a head before you can handle them. I am very optimistic that the dialogue that has started now, in non-violent protests, are all very powerful tools.”