Mark Leibert’s Reflex, at Sandler Hudson Gallery through July 8, is an exhibition of portraiture and abstraction that is, from first encounter onward, faintly disconcerting. Starting with the juxtaposition of enormous close-up studies of faces with tiny, minimally rendered abstractions that echo some aspect of the head-and-not-quite-shoulders painting, everything about these works is just a little . . . different.

Leibert stated in an artist’s talk that he hoped this show would leave the viewer altered in some way, just as the protagonist of one of his favorite novels, Haruki Murakami’s 1Q84, finds herself living in a slightly altered 1984 Tokyo after she rashly violates normal routine through a seemingly minor gesture (p. 11: “And after you do something like that, the everyday look of things might seem to change a little . . . . But don’t let appearances fool you.”) 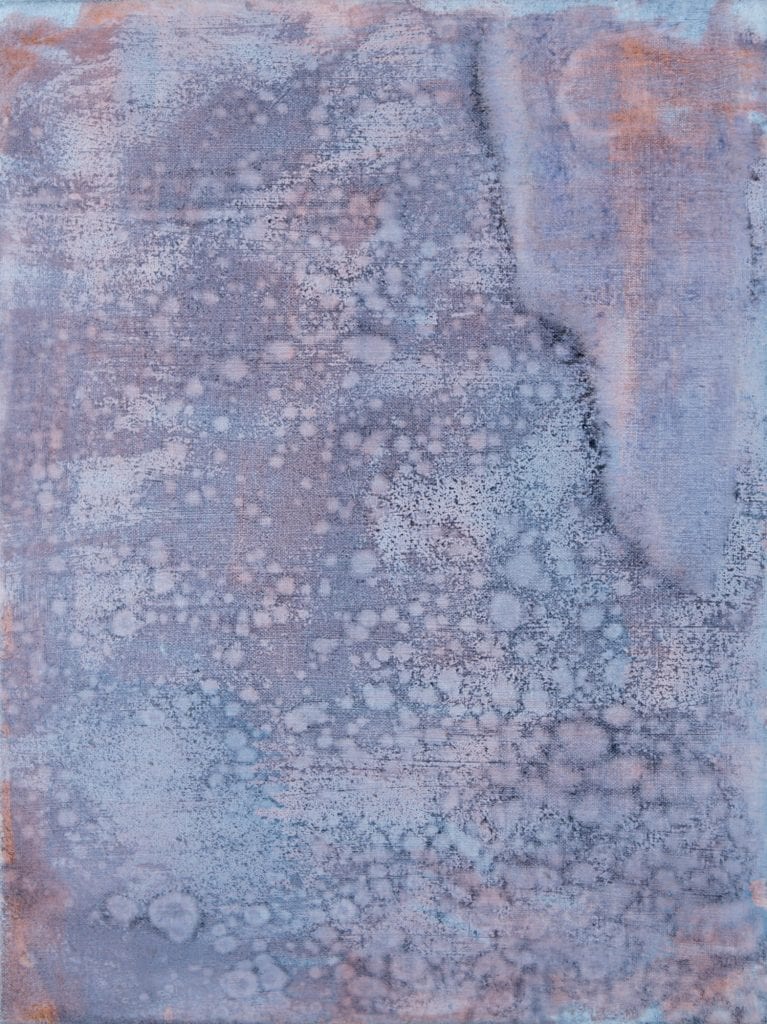 Like the slightly askew world in which the strangeness of 1Q84 replaces the normality of 1984, “Reflex” presents the viewer with an unequivocally beautiful combination of portraiture and abstraction that, nevertheless, produces the sensation in many viewers that something is not quite right. But what? Everything looks normal when studied in detail; in fact, much of it is almost overly normal, seemingly no more than a grouping of familiar genres.

As in the narratives of Murakami’s novels, the unfamiliarity discloses itself only after considerable investigation. The monumental portrait heads have the precision but also the subdued palette of small drawings, or even of preparatory sketches. Many of the less central details are rendered almost perfunctorily; this is a common enough practice, but here it is deployed at a scale and in a tightly cropped format that makes it uncommon. If the large, detailed oils on canvas look a bit like drawings in pastels, the smaller, blurrier portrait heads resemble watercolors more than the acrylics and oils they actually are.

The other half of the show, the aptly named “Blank Series,” consists of variously sized and shaded barely-there abstractions that could be mistaken for color studies when looked at inattentively, or variations on the grayscale in the case of the several combinations of mistily atmospheric grisaille gradations. Since Leibert writes in his artist’s statement that his sources of inspiration include “the ‘snow’ of empty television or CRT screens, ‘ruined’ rolls of film, the process colors of imperfect Polaroids, glitchy VHS tapes,” it’s easy to read these as studies in absence, meant to match the sense of partial absence in the various portraits. I, at least, wanted to read them as images gone bad, or devices meant to deliver information that happens at the moment to have no content. (It’s also difficult to avoid recalling William Gibson’s lapidary opening sentence from Neuromancer, the novel that gave birth to cyberpunk: “The sky above the port was the color of television, tuned to a dead channel.”) 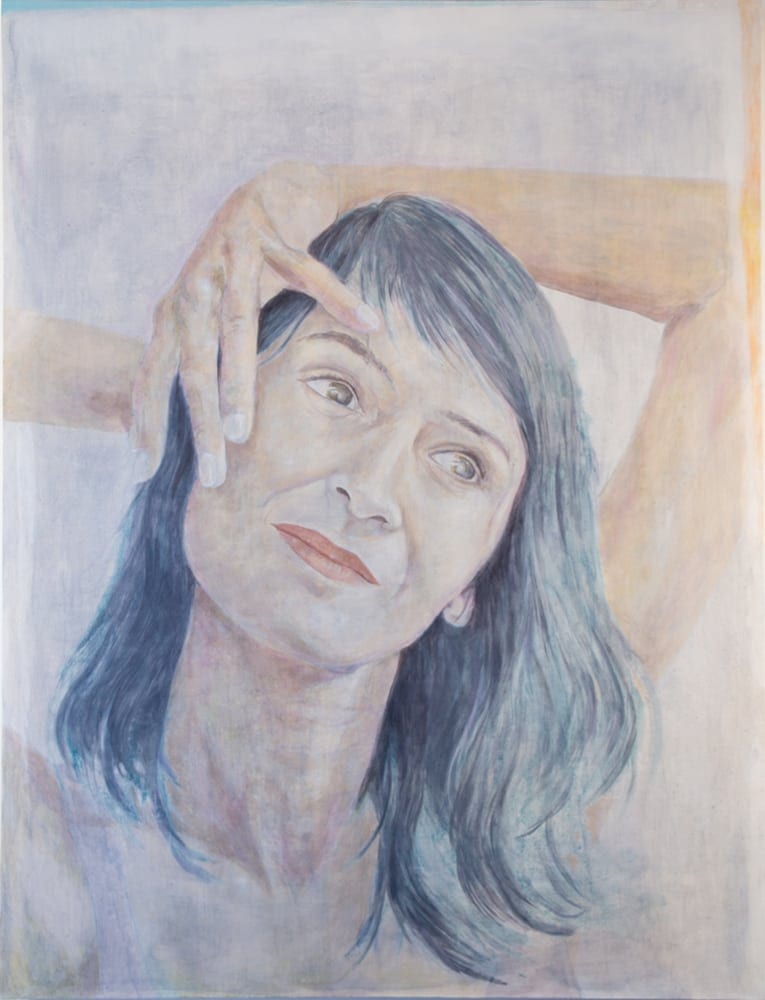 This is probably an over-interpretation, and yet . . . and yet. (Apologies for the allusion to Issa’s most famous poem, but it conveys the tone of uncertainty these paintings evoke.) The largest portrait heads are coupled with almost absurdly small “Blank Series” abstractions, in formalist juxtapositions that throw this viewer, at least, off balance. Asking why, I realized that the thin green stripe that appears for no obvious reason in the portrait titled Tracking blends chromatically with the green of the small painting hung in extremely close proximity — and the gaze of the subject of the portrait leads the viewer’s gaze to the unexpectedly complex sequence of seemingly minimal, nearly monochromatic abstractions that anchor the right-hand side of the wall as firmly as the single painting and its companion anchor the left-hand side. (If you doubt this, see the installation photo.)

This clever method of installation is no guarantee that viewers will pay attention to how much is actually going on in so many paintings in which nothing much seems to be happening, but those who are sufficiently disturbed (possibly in more than one meaning of the word) will begin to notice the subtle visual rhythms of a “Blank Series” that is anything but blank. Even more than in most circumstances described by the old cliché, the longer you look, the more you see.

The subtle variations from work to work and the energetic relationships between one and another suggest that the abstract paintings should be considered in groups rather than individually — and yet, looked at one by one, each sustains itself on a purely formal level. But it’s the subtle interplay that makes them subjects for reflection.