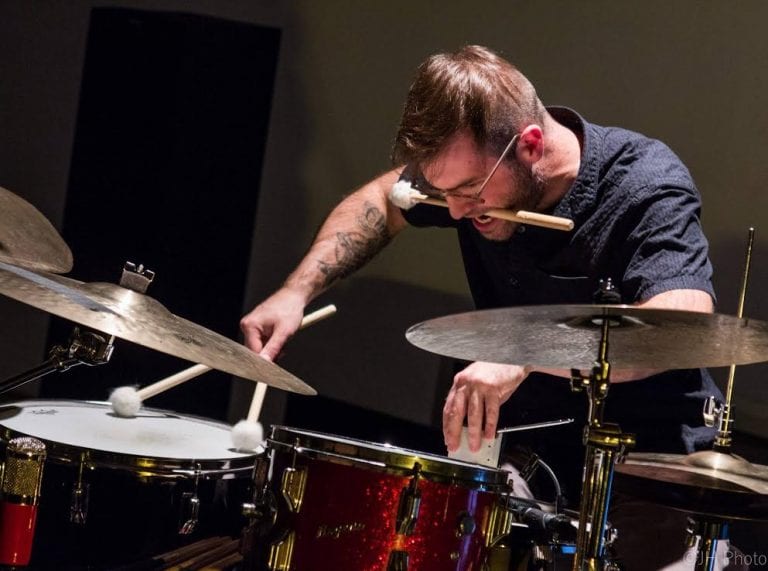 Sean Hamilton performed a set-long piece that featured the drums and other percussion instruments.

The Bakery hosted a percussive electro-acoustic showcase Sunday by Sean Hamilton and Klimchak as an early evening event in one of the DIY venue’s two performance spaces. The performance was lively and invigorating and held the attention of the audience.

Both artists are deeply involved with merging their live percussive art with interactive electronics. Last September, Hamilton and Klimchak presented a similar concert at Eyedrum with fellow percussionist Victor Pons. Eyedrum is currently homeless, having been obliged in the spring to vacate its 88 Forsyth Street location due to a nexus of forces beyond its control, and is currently looking for a new home. Eyedrum collaborated in presenting Sunday’s concert at The Bakery.

The Bakery’s booking/sound man, Daniel DeSimone, was also on hand to curate and oversee the concert in addition to an unrelated electronic drone and ambient session that followed at 9 p.m. in the complex’s other performance space. Given the local avant-garde community’s pressing need for inexpensive but viable venues and its reasonably easy-to-find southwest-side location, it’s no surprise that The Bakery, the brain-child of founder and creative director Willow Goldstein, is finding itself to be a desirable event space.

Klimchak, Atlanta’s long-time “baron of the bizarre,” performed the opening set, which featured two new original compositions, “Into the Void” and a work-in-progress, “Pandora’s Checklist.” Both soundscapes made use of signature Klimchakiana: hand-built instruments, Tuvan throat singing, processed electronics and peripheral objects. For this concert, Klimchak created a new instrument, a board of sound-producing objects wired with six contact pickups, including tines like a kalimba on one side, of which he says, “I left the tines long, bent into a circular shape and added weights on the end so they would vibrate in rhythm when struck or plucked.” Both pieces featured a wide sonic palette from shifting whispering sounds to bold colors that drew the mental ear into the music rather than driving it by volumetric force.

Tampa-based percussionist Sean Hamilton followed intermission with set-long solo improvisation for drums and interactive electronics, similar in manner to his appearance at Eyedrum last year. This year’s presentation was a titled work-in-progress, “Math of Cynics,” using a standard trap set, played with traditional drumsticks, felt-covered mallets and hands. He also used other objects to strike and stroke the instruments, such as large tin cans that rattled. His sonic palette was wide like Klimchak’s, but the character was an expansion upon that of the drum set, and the visceral drive that naturally comes with it, rather than eccentric sound sources.

Hamilton’s subtle interactive electronics, well-balanced with the acoustic percussion, were processed on an Apple laptop running Pure Data software, an open-source version of the visual programming language Max/MSP that helps musicians build complex, interactive programs without prior code-writing experience. Hamilton also added a new mixer to his arsenal since his last Atlanta appearance, projecting his processed sounds with increased clarity.

The show ended on schedule, just before 9 p.m. Although it started a half-hour late and had a longish intermission, the program was of a satisfying length, and an extra 30 minutes might have felt longish, given the density of the music presented by both artists.