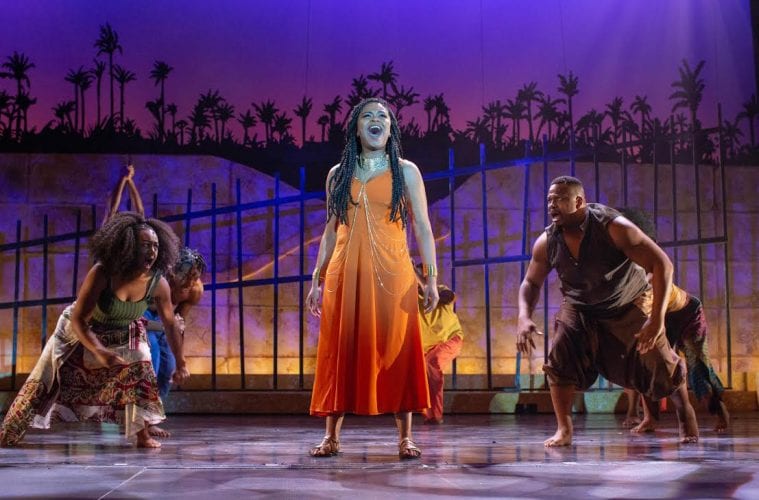 Aida has been billed as a love story from its inception, a sort of Romeo and Juliet story with Egyptians and Nubians. The musical is based on Verdi’s popular 19th-century opera of the same title. An affair between a white master and his black slave, however, is not a love story; it is a story about power, and that’s where Aida shines.

The power lies with the feeble pharaoh and his petulant daughter Amneris (Lauren Hill), because it is their version of events that will remain our collective history. So when Egyptian prince Radames (Haden Rider) captures Nubian princess Aida (India S. Tyree) and they fall in lust, the real existential question is not about love, but rather about whether there is more to life than conquering and being conquered.

Director Taylor Buice and musical director Christian Magby lead a young cast of talented performers to create a production that is as humorous as it is contemplative. At the top of the show, the audience sees what could be an exhibition in any natural history museum, and the artifacts come to life to tell the ill-fated story of the young royals.

Heir to the throne, Princess Amneris is betrothed to Prince Radames in the middle of a violent war between Egypt and Nubia. Everything is going as planned for the wedding festivities until Radames falls for his recently captured slave, Aida, and they both must choose between the desires of their hearts and what is best for their people.

At the risk of using a cliché, the best word to describe Tyree’s performance is soul-stirring. Her vocal range is impressive, going from Saturday morning low to Sunday morning high. She is really in her sweet spot with the rest of the ensemble in the gospel-inspired numbers “Dance of the Robe” and “The Gods Love Nubia.”

Every scene where she isn’t singing might as well just be fluff until we get to hear her again. This is a hefty role for a young performer, and she delivers with guts and glory. Hill also gives a vivacious performance as a woman scorned, and she delivers a show-stopping performance in the number “My Strongest Suit.” This is a fun song that allows the actors to have a fun fashion show onstage with no shortage of jewel tones and sequins.

If this production has any shortcomings, it’s that it takes itself too seriously at times. Some actors use heightened presentation, and others speaking naturally, which is a distracting inconsistency. This is a campy modern musical about an ancient story, and the musical style is more pop than musical theater. They could all afford to lean into that more.

Also, Ben Rawson’s lighting is distracting and ineffective at times. There are beautiful moments, like the sun rising over the oasis, but the lights completely wash out the actors of color, so we hear Aida but can’t really see her.

Atlanta Lyric’s production of Aida is by no means a smooth ride, but it is a fun one. Even as the love story falls apart, the story about whose stories are told through time is still one worthy of intrigue. If “fortune favors the brave,” then these young people have bright futures ahead.