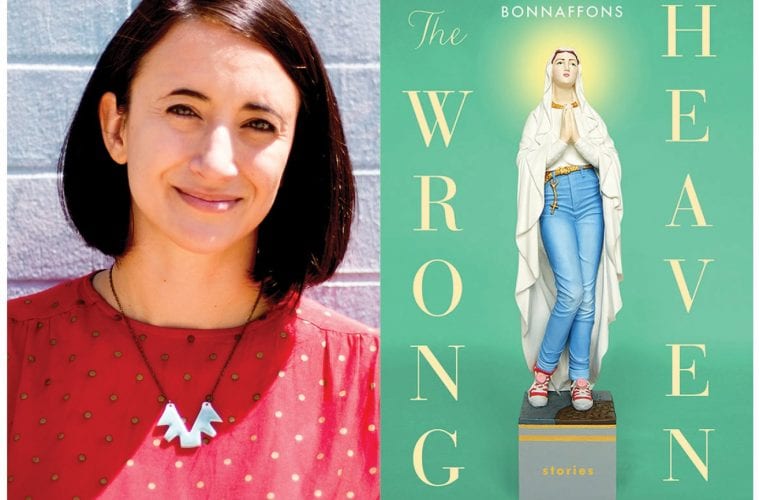 Many of the characters in Amy Bonnaffons’ funny, strange and inventive debut story collection The Wrong Heaven don’t exactly have the best relationship to higher education. Among the stories’ panoply of oddballs and misfits are Andrea, who can’t seem to complete her film school application; Cass, a PhD dropout who slowly realizes the most pleasurable part of her life was her summer waitressing job; and Serena, who completes her degree but “always felt like a failure because she wasn’t leading obscure seminars on object theory, or giving papers at the MLA conference, or being addressed as Professor Lowry.”

It’s somewhat surprising, then, to learn that Bonnaffons is currently a Ph.D. candidate in creative writing at the University of Georgia. ArtsATL caught up with the writer and student in Athens to discuss The Wrong Heaven in advance of her Atlanta reading at the Wrecking Bar on August 23 at 7 p.m.

ArtsATL: You were born in New York City, and you set the majority of stories in The Wrong Heaven in places there — the Upper East Side, Manhattan, Brooklyn — or in Boston and other presumably Northeastern locales. But you’re currently a Ph.D. candidate at the University of Georgia. How has living in Athens influenced your life and work? Have you (or will you) ever set a story in Georgia or the South?

Amy Bonnaffons: Yes, I did grow up in New York (I spent my childhood in Manhattan and upstate NY, and eight years of my adult life in Brooklyn), but my mom is from a small town in Arkansas, and my dad is from New Orleans.  So, though my parents chose to leave the South and I wasn’t raised there, I’ve always felt connected to certain aspects of it — especially to a certain Southern style of storytelling. Eudora Welty was revered in our house; my little sister was almost named after her. My parents came North to work in theater, and the people who were at our Thanksgiving and Christmas gatherings were their friends, mostly fellow Southern transplants who had also come to New York to work in the arts. All of them were amazing storytellers, especially my parents; I remember listening rapt as they told and retold their favorite anecdotes, which came to have the status of legends. From them I inherited a fondness for “characters” — eccentric people of all kinds — and a tendency to memorize funny interactions I witnessed, converting them into quips and mini-anecdotes to share around the table. Obviously, this was a great environment for a budding writer.

I moved to Georgia three years ago to work on a Ph.D.; I came because the program at UGA was well-respected and perfectly suited to my needs, but I consider it a lucky accident that I ended up in the South. I’d already started a project that drew on some family history, and I’ve continued to develop that project here. In some ways, Athens, GA doesn’t feel like “The South,” or at least the idea of The South that Northerners have — it’s a liberal college town full of hippies, professors and indie rockers — but in other ways it exemplifies a lot of the contradictions and tensions of the region. I’ve learned a lot by living here — for example, it’s forced me to think about race and whiteness in a different way. I’m sure it will inform my work going forward.

ArtsATL: As a follow-up, I wanted to ask about graduate school. I found it interesting that several characters in your book struggle with the idea of pursuing a post-graduate education. But you have a B.A. from Yale and an M.F.A. from NYU as well as a book in print and forthcoming novel. What motivates you to pursue a Ph.D. in writing? What advice would you give to writers considering graduate school?

Bonnaffons: It’s funny you point that out — my characters seem to feel more ambivalence about higher education than I myself feel. I’m a big nerd in this way: I love school. It’s stressful sometimes, but (for me) a million times less stressful than working 9-5 in an office or teaching full-time (both of which I’ve done). I’d recommend a Ph.D. in writing to anyone who feels this way, who has a high tolerance for hanging out in academic environments. It’s a great way to get writing done while studying all the books you didn’t have time to get to in your undergrad or M.F.A. education.

Writers definitely don’t need to go to graduate school. But I think if you’re motivated to do it, and you find a program whose culture seems like a good fit, it can be a really good thing. It’s a shortcut to community and connections you might not have made otherwise; it’s a way of validating and legitimizing your creative ambitions; and it will probably help you to become a better writer, or at least a better editor of your own work.

That said, I realize that being white and having a fancy undergrad degree made that transition easier for me. Also, it’s hard to afford grad school; even if you’re paid a stipend in exchange for TA or RA work, it’s often too small to really live off. There are real problems with diversity and access in higher education; we should work to make it more inclusive, not just in a tokenizing lip-service way.

ArtsATL: Something I really love about your collection is how frequently we see such a wide variety of female relationships in the stories. Can you tell us a bit about this emphasis on the relationships between female characters — and perhaps how it differs from those we see between women and men?

Bonnaffons: I’m glad you noticed that! I think about female relationships a lot in my own life, and that focus definitely found its way into the book — not as a calculated choice, but as a reflection of what’s important to me. I wrote Doris and Katie after accompanying a female friend to a doctor’s appointment and thinking about the ways in which we often rely on each other like family. I wrote Horse after reading Elena Ferrante’s amazing Neapolitan novels and reflecting on how female friendships can feel as intense as romances. It’s hard to define the difference between female/female and female/male relationships, as each is unique (and of course there are lots of relationships that take place outside of that binary). But I think power works differently when people share a gender versus when they have different genders — and this affects what people share in intimate moments, how vulnerable they’re willing to make themselves, what secrets they keep from each other.

ArtsATL: I really appreciate and admire that in Doris and Katie, you feature protagonists who are over the age of 60 and female, a demographic that remains grossly underrepresented in American culture. As a young writer, what challenges or obstacles did you face in creating these characters with depth, dimension and humanity?

Bonnaffons: I don’t know what it feels like to be 65, but I do know what it feels like to have a long friendship that’s both a rudder of support and a source of agitation and resentment. Our friends reveal our own shadows and flaws to us; because they allow us to be our full selves, they can sometimes reveal our failures. I connected to that feeling in order to empathize with Doris and Katie, and I tried to imagine my way into the rest of their experience.

I actually wrote that story when I was super young, like 25. I’ve revised it a lot since then, and I think my own dawning awareness of what aging feels like was folded into those revisions: the bittersweet feeling of your own life falling out of sync with your friends’, and the realization that you may not get to do everything you’d wanted to do with this one life.

ArtsATL: The stories in The Wrong Heaven cover a wide array of women’s issues — miscarriage, Endometriosis, breast cancer and eating disorders — as well as sexual abuse and rape. All 10 feature female narrators and/or protagonists — and men, to large degree, appear in relatively minor roles. You seem to represent a strong sense of what I see as a specifically “female” consciousness in things such as the characters’ acute body- and self-awareness and their sexual appetites. I came away from the book believing that its frank, honest content accurately represents what it is to be female in 21st-century America. That said, what, in particular, would you like male readers to gain from reading your book?

Bonnaffons: I hope that men do read my book and that it helps them understand something about what women go through, especially in intimate relationships. The recent resurgence of the #MeToo movement has highlighted not only the most extreme forms of sexual violence but also the more subtle ways in which the culture encourages women to displace themselves from their own relationships and even from their own bodies. It would be great if my book gave male readers some insight into what that can feel like. I can’t speak for other women, but I can reflect on what I’ve experienced and observed (in this case, what I saw around me when I was in my 20s and dating in New York).

That said, I have a lot of empathy for what our culture does to men, as well. My novel [The Regrets, forthcoming 2020] has several narrators, two of whom are straight men. It was interesting and challenging to try and imagine my way into their perspective.