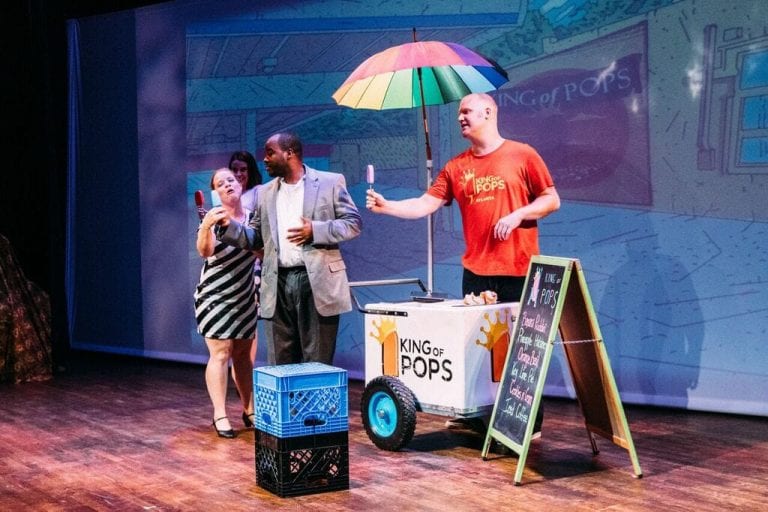 Like many great ideas, the King of Pops was born out of desperation. (Photo by Annalise Kaylor)

An animated, giant whistling orange popsicle pops up on a screen. Lights come up and inside the offices of AIG, the 2009 banking crisis is wreaking havoc on employees as they are being laid-off from their jobs.

As insurance agent Steven Carse (Chris Rittelmeyer) and his coworkers mull over their uncertain futures, a tense moment arises and Heidi, played by J. Hill, jabs a pencil into a jelly-filled doughnut. After taking his severance package, Steven licks the pencil. Voila! The idea for King of Pops, Atlanta’s favorite handcrafted frozen treat, was born.

This is not a missing scene from the movie Clockwork Orange. This is Dad’s Garage’s King of Pops: The Post-Apocalyptic Musical, directed by company member Tom Rittenhouse, onstage at 7 Stages through May 30.

The road to popsicle stardom seems sweet, until corporate witch Gia, hilariously played by Gina Rickicki, pushes in the Ice Queen Cream vanilla ice cream cart. With the force of clones and LSD, she plans to take over the food truck underground and have the entire city of Atlanta screaming “Vanill It!”

But Steven won’t go down without a fight, and with the help of his fellow food truck underground pals, he sets out to take on the corporate clones.

This musical is ridiculous at best, but the 200 or so people in the opening night audience loved every second of it. There is no live instrumentation. The songs — with lyrics by Mike Schatz and music by Schatz, Ben Holst, Jason Shannon and James Watson — have an Avenue Q–meets-Spamalot type of humor and sound.

It is obvious that the script is still in development, and save the random appearances by white jumpsuit clad clones, the postapocalyptic part of the script gets lost in all of the hijinks and stage business.

The technical elements were on point, but the cast and director could have used a couple more rehearsals to get the singers to project more and tighten up the comical bits. This musical is not ready to be on its feet, but what new musical is ready without an audience to respond to it?

Despite this, the show does have enjoyable pieces. The food truck parade was a shining moment, and the witty writing that Dad’s Garage is known for made it even better. This is where the owners of Three Bears Oatmeal (not porridge) and That’s S’Maghetti are introduced, played by Mark Kendall and Karen Cassady, respectively.

The script positions the King of Pops cart at the corner of Highland and North avenues as the thing that established Atlanta’s food truck culture. Whether or not that holds true in reality, it is refreshing to see a musical that celebrates local young entrepreneurs and the Atlanta neighborhoods that support them.

King of Pops: A Post-Apocalyptic Musical is less about experiencing “good” theater and more about letting loose, laughing at the silliness, and grabbing a pop at concessions. Packed with clones, bombs, music and dessert, this has real potential as a video game that could rival Candy Crush any day.