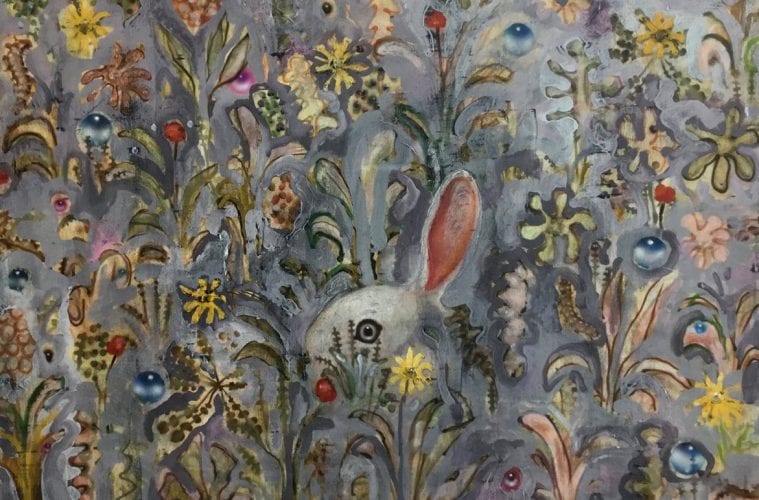 Review: Joe Peragine paints hunt scenes for a post-natural world in “After the Hunt”

Wildness is fading from the natural world. An alarming recent study concluded that while humans make up 36% of the planet’s mammal biomass, domesticated animals like cows and chickens make up 60%. Only the remaining 4% belongs to wild animals. These are sobering numbers, and they highlight how far our everyday conception of nature has drifted from the reality. If nature painting is to survive in this transformed environment, it must become hybrid. The works in Joe Peragine’s exhibition After the Hunt, on view at Marcia Wood Gallery through June 30, are exemplary harbingers of what this change might look like.

Paradoxically entwined cycles of life and death form the subject matter of the show, extending the meditations on animals the artist has been developing through several recent bodies of work, including 2015’s Love Me Till My Heart Stops. Peragine was also recently appointed the head of the Welch School of Art at Georgia State University, and these works show him at his best as a searching painter of the quick and the dead alike. 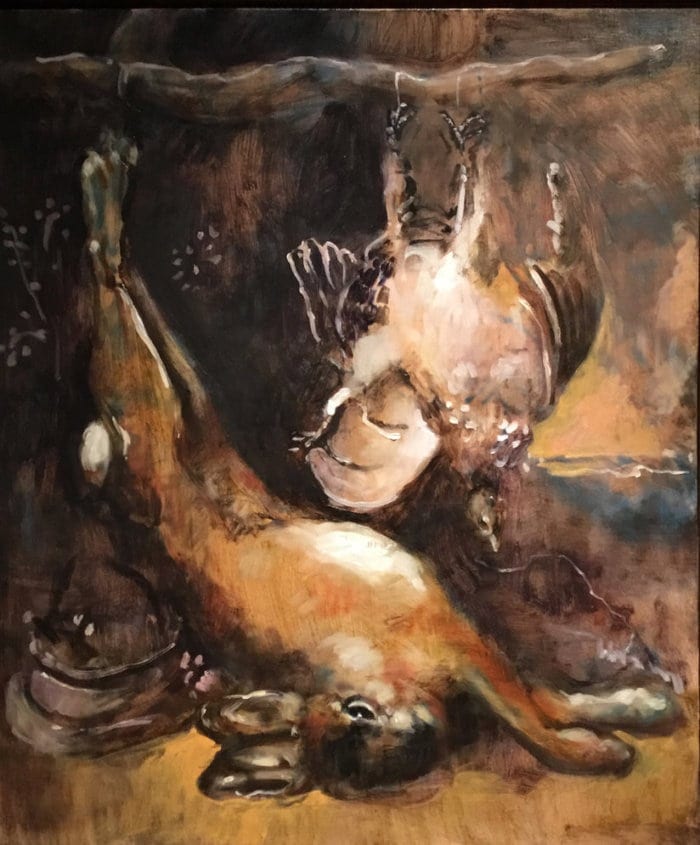 The exhibition’s title promises blood; appropriately, then, the entrance is by way of the abattoir. The gallery’s atrium is hung with eight paintings that draw on the imagery and compositions of Jan Weenix, the celebrated 18th-century Dutch master of elegantly arranged game corpses. For Weenix, still life offered an opportunity to show off his miraculous skill at depicting surfaces: fur, feathers and skin. Peragine’s works, rendered with thickly visible brushstrokes, draw attention instead to their painterly character. They depict rabbit and swan bodies hung and draped as if descending from the Cross, dense with allusions to Weenix paintings.

These prefatory images are in part an affectionate homage to the still life, but also a farewell to the genre. Game paintings, after all, were created to decorate the hunting estates of aristocrats, but their visual language has far outlived the aristocratic tradition of the hunt itself. If these depictive habits are a kind of persistent delusion, what might replace them? What comes after we relinquish not only our fascination with death itself, but also the tradition-encrusted genres that have evolved to represent it?

The works in the main body of the exhibition take up this question. Most are staged within a metaphoric afterlife of abstracted meadows. Peragine’s animals, mainly solitary hares with the occasional deer and a scattering of insects, are inconspicuously situated among the foliage. They peek out shyly from the all-black or all-white backgrounds of enormous canvases like Pink Meadow 1 (2018) and Black Meadow 1 (2018). These paintings, daubed with only minimal patches of pastel color, have a flattened, aperspectival all-over design that evokes medieval tapestry or natural history notebooks, with flowers, weeds and grasses being rendered as simple outline shapes painted with airbrush in a loose, sketch-like style. Others take a more lurid approach; Blue Ear 1 (2018) is heavily patterned with neon vegetation that resembles cut paper. The rabbit at its center is outlined in negative space, a barely suggested figure whose only visible features are its luminous eye and ear viewed in profile. 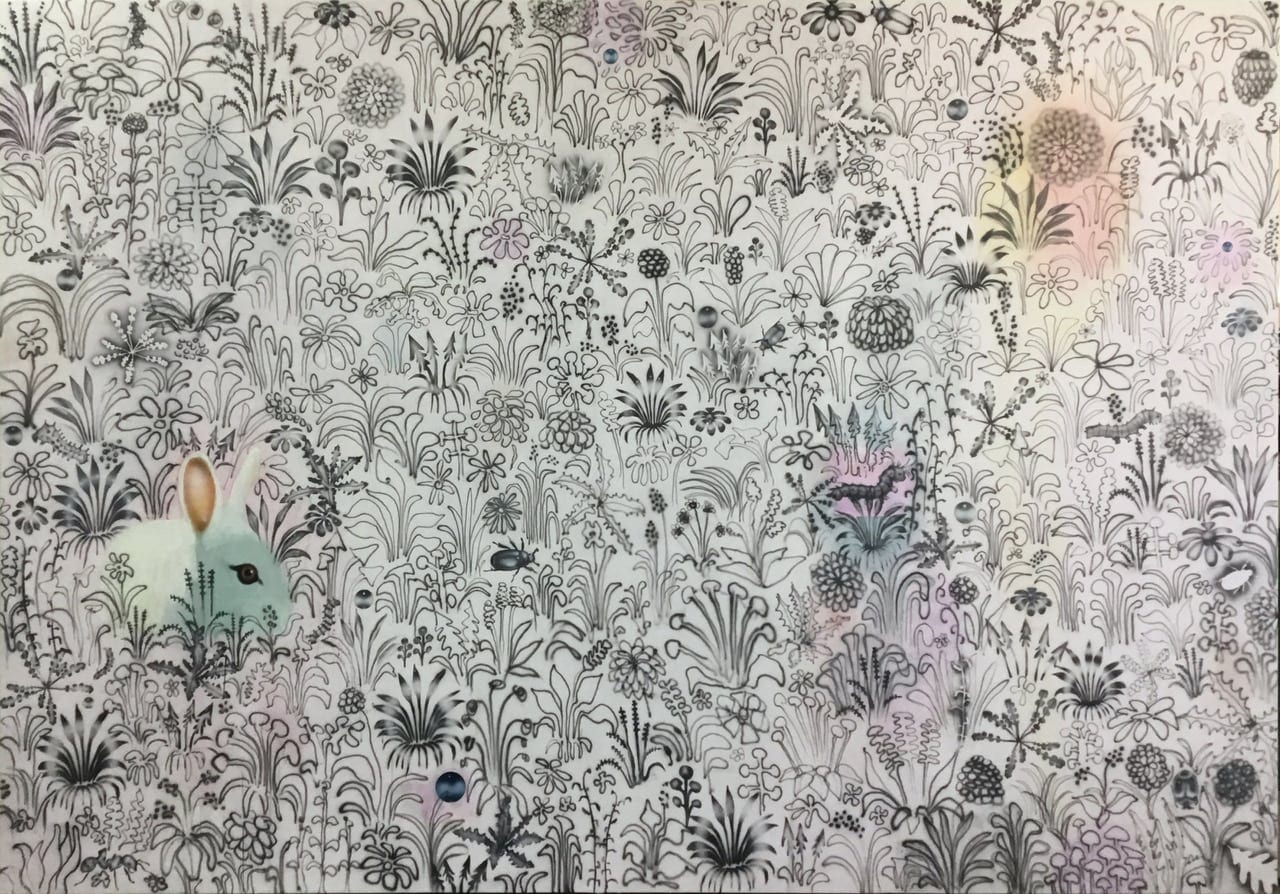 Peragine’s squiggly brushwork and electric colors highlight the unreality of these realms. The ghostly animal inhabitants are often rendered in soft lavish textures like beings sculpted from living cloud. Stylistically they are at odds with their flat surroundings, as if they no longer fully belong to their world. The animals in these works feel as if they are holding their breath, motionless and unblinking. Staring back at the viewer warily, their stillness echoes Charles Wright’s poetic admonition: “The cottontail hides/out in the open, hunched under the apple tree . . . Smart bun./Sit tight and hold on.”

If the exhibition’s opening works are a farewell to the still life, then these paintings ask the obvious next question: How should we paint nature once we decide to abandon not just that genre, but also garden painting, most of the pastoral landscape tradition and the eccentric realm of animal portraiture and the works of the animaliers? Is there anything recognizable that remains of nature painting once we move beyond these familiar provinces? 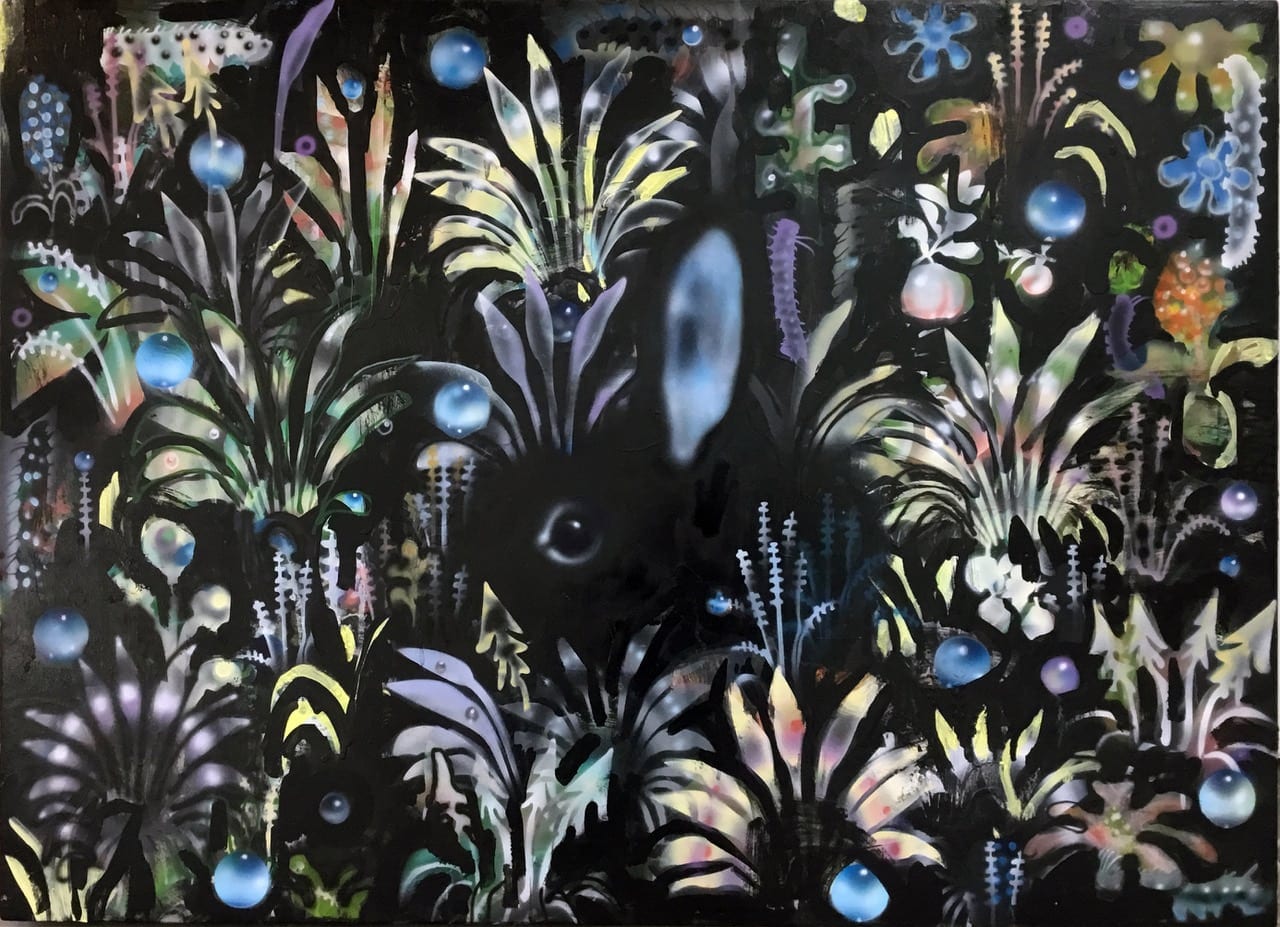 What gives Peragine’s works their lively strangeness is that they belong to none of these genres. Their tentative, almost unfinished character reflects their origins: these new works derive their appearance from the bare underpainting Peragine used in earlier paintings. They are time-hopping hybrids, drawing freely on contemporary painterly techniques such as airbrushed blur, medieval herbalist manuscripts, heraldry, tapestry, embroidery and natural history painting. They are best seen, then, as stripped-down experimental attempts to find new ways of depicting nature, more suited to times in which our faith in these old forms of representation is justifiably waning.

Full Disclosure: The author teaches in the philosophy department at Georgia State University.