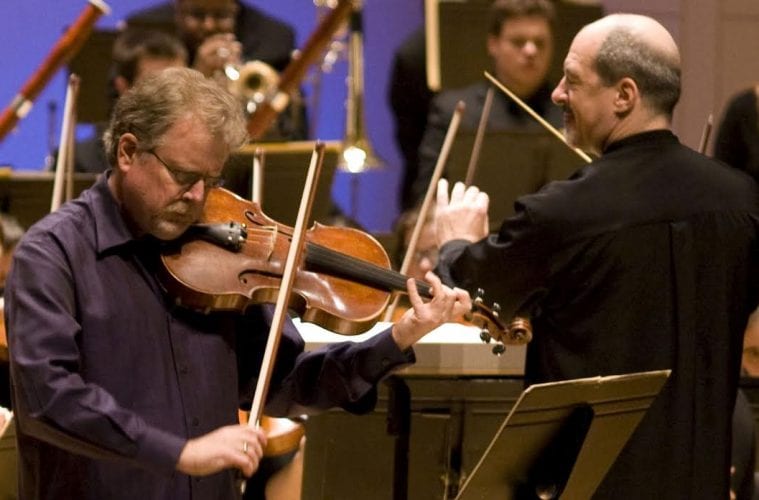 Reid Harris has served as principal violist with the Atlanta Symphony Orchestra since 1979. In that time, he’s been a featured soloist in works by Berlioz, Walton, Hindemith, Strauss, Mozart, Bartók, Telemann and Bach. Harris was the first member of the Atlanta Symphony to be appointed to the orchestra’s Board of Directors. Prior to joining the ASO, he served as assistant principal violist with the Baltimore Symphony.

Harris is a graduate of the Cleveland Institute of Music, where his principal mentor was Abraham Skernick. He also studied with William Primrose and Joseph de Pasquale. While at the Music Academy of the West in 1970, Primrose chose him to receive the Outstanding Achievement Award for a violist.

A founding member of the Georgian Chamber Players, Harris has also participated in music festivals in Amelia Island, Steamboat Springs, Highlands and Grand Teton, among his other distinguished musical credits.

After 39 years as the ASO’s principal violist, Harris will step down after this season’s final subscription concert. ArtsATL recently caught up with Harris in a conversation over coffee, about his career, time with the ASO and retirement plans.

ArtsATL: You’re retiring after 39 seasons as principal violist with the Atlanta Symphony Orchestra, and your final performance with them is June 9. Looking back on it all, how do you feel about your time as an orchestral musician? Reid Harris: September 1, 1979, was my employment date. Four people had been hired at that particular time, including three as principals: me, Chris Rex and Jonathan Dlouhy. I had been in the Baltimore Symphony for four years prior. For me it’s been the greatest joy to play in a symphony orchestra for 43 years, an extraordinary experience. Never “just a job.” Like anything, the more you put into it, the more you get out of it, and I put in a lot — investment in truly understanding the music, and always being totally prepared to play the concert (from my end) at the first rehearsal. I still do that to this day.

ArtsATL: You’ve also been a member of the Georgian Chamber Players since its beginning. After you leave the ASO, will you continue playing chamber music?

Harris: I have not retired from the Georgian Chamber Players. Traditionally, it’s been the principal strings of the ASO, and we haven’t hired a new principal viola, so I’m still playing. We’ll see what happens in the future. I may not even be seeking part-time employment with viola. It’s a kind of a fluid thing because my wife Carol has irons in the fire, and we may end up relocating — then I’ll see what the musical environment is like.

ArtsATL: How about nonmusical activities?

Harris: I have all these ideas for writing, but I’m not sure I can actually write, which might be important! But I also look forward to experimenting. I usually aspire to excellence in everything, but maybe I’ll just do it for the enjoyment and see if I can craft a short story or something like that, and keep working on it. I’m also an avid reader [of] many genres.

ArtsATL: So you’ll be spending some time with books?

Harris: Certain books. I’ve always loved The Lord of the Rings series. I think I’ve read [the series] three times. We have a swimming pool, so my first project for vacation is to get my new waterproof e-reader, float around the pool and read The Lord of the Rings again. I have the perfect pool lounger, a recliner. It floats like a dream.

ArtsATL: What are your other tastes in literature?

Harris: Oh, I’m very eclectic. My big project is James Joyce’s Ulysses. I really want to read Ulysses. You can’t just read it; you have to invest. I have some reference materials, and I’m working on some background. Just like composers, I’m fascinated by great writers and the process that makes them great.

ArtsATL: Are there other creative things retirement may free you to do?

Harris: I was a very good singer when young, a high baritone, but quit to specialize in viola at school, so I might take some voice lessons and see what I can do. I also want to dance because it’s using my body in ways that I haven’t before and being kind of artistic at the same time. Whether it’s good art or bad art, I still have to be artistic in some way. I know that. I still have to be creative. ArtsATL: In your tenure with the ASO, you played under three music directors, first under Robert Shaw, then under Yoel Levi, then under Robert Spano. How were they different, and how did they each impact the orchestra, from your front-row perspective?

Harris: It’s an interesting question because Robert Shaw hired me, and then I was on the two search committees that hired the next two music directors, Yoel Levi and Robert Spano. Robert Shaw was a great intellect, a great musician, notably as a choral conductor. He was one of the most brilliant people I ever met. I will say I think Robert Shaw is perhaps the only “great man” that I have ever known personally, and that covers a lot of territory. I’m sure people will understand that. He transformed the ASO and Atlanta’s cultural life and established the peerless Chorus. Sometimes he applied choral techniques to the orchestra, with variable results. Upon his retirement, we needed a strong technician to develop ensemble, someone with a good foundation in orchestral playing and instrumental playing in general.

ArtsATL: What particular pieces of music performed under Shaw stick out in your memory?

Harris: When Robert Shaw did the Beethoven Ninth, there was something about Beethoven’s essence that he really conveyed on a wavelength most conductors don’t. It didn’t apply to all Beethoven, but it applied to the 9th Symphony in particular, and also the 7th Symphony. Robert Shaw was such a “rhythm guy.” I really treasured those performances and of course some of the great choral performances, many that we recorded, such as the Missa Solemnis and Brahms’ Requiem. You can’t get better than that.

ArtsATL: And after Shaw stepped down as music director? Harris hopes to try other creative endeavors in his retirement. (Photo by Carol Statella)

Harris: Then the pendulum swung the opposite way. Yoel Levi was one of the great technicians among conductors, and we did some incredible things like the recording of “The Rite of Spring.” I’m not sure anybody could ever do that again. It’s such a difficult piece, but everything was right in place. It was quite incredible. But he was also a . . . close manager, balancing the particulars while allowing these gifted instrumentalists to play — a challenge.

ArtsATL: That seems a critical element in searching for a music director, finding one who is a great technician but who also has an encouraging personality, and matching them with an orchestra like the ASO.

Harris: That’s the key. Some conductors come to us and they try to be the disciplinarian, and we don’t need that. I mean, we want direction and discipline, but if you go too far, it stifles musicality.

Then with Robert Spano, the pendulum swung the other way. Robert Spano never dictates to anyone how to play. He encourages; he draws the best out of you. I’ll never forget the first piece we did — which is also the last piece I will play with the Atlanta Symphony — Scheherazade, just blew us away.

ArtsATL: What are other performances that you did with Spano that really stick out in your mind?

Harris: Some operas — La Bohème, Otello recently — and the Bach Passions, I thought he did those very well. The things you really don’t think of a symphony orchestra doing well, they stick with me. I thought he did a great Mahler Third. And Donald Runnicles, I remember his Mahler Second that was in 2012 before the first lockout. I remember that as one of the great performances of the Atlanta Symphony and Chorus. But back to Robert Spano, he is a person who understands people, not just musicians, and he is also a great person. Hard to compare to Robert Shaw, but Robert Spano is an exceptional human being, there’s no doubt about that. I’m really interested in where the pendulum will swing with the next conductor.

ArtsATL: How would you sum up your career, then?

Harris: If I were to use one word to sum up my orchestral career, it would be “joy.” It’s about the music; it’s about the people, my associates with whom I play. I think we’ve had a reputation as an orchestra with a good attitude. When it comes down to it, when it’s a performance, no matter what kind of performance it is, no matter what conductor it is, the music comes first. That moves me. I’m very proud to have been in an orchestra like that.