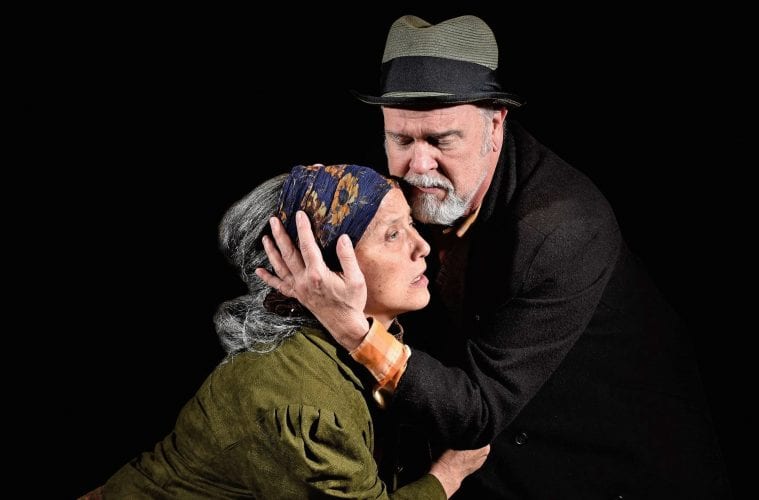 Review: Horizon’s “Citizens Market” reminds us that we are a nation of immigrants

“It seems to me that in America no one is really from here.” These words, uttered by recent Ghanaian immigrant Akosua, rendered with humor and sincerity by Jasmine Thomas, underscore Cori Thomas’ new play Citizens Market. The play is onstage at Horizon Theatre through June 24, and premiered in March at City Theatre Company in Pittsburgh, making Horizon’s the second production.

Akosua has come to America to escape rejection and heartbreak, but the journey to independence in the Big Apple proves more challenging than she thought. Luckily, she finds a job and a community in an immigrant-run grocery store.

Citizens Market is the first installment in a series of plays that Horizon is staging through the fall about “New American Dreams.” For this production, sisters Isabel and Moriah Curley-Clay have designed a set that looks like an actual grocery store placed on the stage. Everything from the manager’s office and employee break room to the registers and tile floors look like a typical corner market. The shelves are stocked with food that was donated by Horizon supporters, and the theatre will donate it all to the Atlanta Community Food Bank when the show’s run is over.

This play features a strong ensemble cast with great chemistry. Manager Jesus (Christian Gonzalez), from El Salvador, came to the US as a teenager and has fully assimilated into the pace of NYC. Akosua, who they call Sunday, is struggling to adjust to the weather, noise and isolation of being in a new place. Bogdan (Allan Edwards) and Morfina (Carolyn Cook) migrated from Romania and have spent most of their lives in New York, but have fallen on hard times that have led to them depending on a nearby church for food and shelter.

Ciata (Cynthia D. Barker) is Jesus’ most dependable employee (and his crush), but she holds a dark secret from leaving Sierra Leone. This is familiar territory for Barker, who starred in Horizon’s production of Third Country, a play about the experience of refugees coming to America. She has some beautiful moments in Citizens Market, especially in the scenes between Ciata and Sunday and Jesus and Ciata. If this cast has any faults, it’s the varying skill level on the accent execution.

Jennifer Alice Acker and Jeff and Lisa Adler direct a quick and quippy 100 minutes without intermission, but they struggle to find a consistent tone for the production. Perhaps this is the result of having three people at the helm.

Horizon’s inclination is to play up the comedic moments in any production, but in this play it takes away from the dramatic moments. Bogdan and Morfina are already built-in to the script to provide comic relief, but the additional hijinks make the tragic moments jarring, and there is little time for the audiences to recover.

Thomas has written a script that is true-to-life in its mix of comedy and tragedy. There are hilarious bits on language barriers, name pronunciations and social graces as well as devastating setbacks and losses. It is also uniquely American in its diversity and in the empathy that immigrants have for each other’s experiences of adapting to the new world.

There is a lot of mention in the script about being voiceless and the feeling of being silenced, not just because of language barriers, but also because of fear. New immigrants face the fear of being deported for minor infractions, saying the wrong thing to the wrong person or not having their papers on them at all times.

While watching a powerful scene where Bogdan and Morfina support Sunday in finding her voice, it’s hard not to think about recent gubernatorial candidate ads where Casey Cagle included images of Latinos as gang members and labeled them “illegal aliens” and Michael Williams proudly stood by a “deportation bus” heading to Mexico. This rhetoric is meant to cement stereotypes of undocumented immigrants and incite fear in those who don’t interact with people who do not look like them on a regular basis. It’s also hard not to think about the new NFL policy that mandates players must stand for the National Anthem or stay in the locker room while it is sung. If they kneel, they will face a fine. The way in which fear of losing livelihood is used to keep people of color silent is a palpable ill inflicted upon some of the most patriotic Americans.

There’s something beautifully American about people from Ghana, El Salvador, Sierra Leone and Romania coming together to support each other. Though the play is set in New York, it could easily be a grocery store in Chicago, Los Angeles, Philadelphia or Clarkston, GA. And despite its uneven tone, the cast delivers a touching performance that reminds us that we are all immigrants.