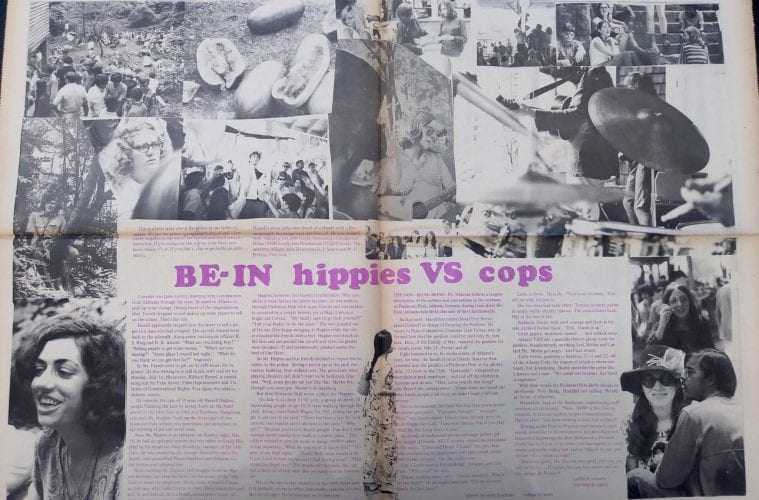 Fifty years ago, the first issue of Atlanta-based alternative newspaper The Great Speckled Bird went to print. One of 200 underground newspapers in the United States, The Bird, a cooperative news project, confronted issues of injustice plaguing the nation. But what began in 1968 as a weekly newspaper for marginalized views eventually became a movement in Midtown Atlanta until the publication closed its doors in 1976.

In 2018, many of the same issues of racial justice, women’s rights, gay rights and war are once again at the forefront of political conversations. As staff members and writers of The Bird prepare for the 50th anniversary celebration on June 2, that irony isn’t lost on them. In fact, to Stephanie Coffin, cofounder of The Bird, it’s poetic justice. The group that brought life to the liberal movement in Atlanta now protests with a new generation of activists that have brought social justice into the mainstream.

“I go to almost all the marches, and I see a lot of Bird people whenever I go, because we’re still doing it,” says Coffin.

The Bird began as a black-and-white biweekly newspaper in March of 1968, and by July of the same year, it had grown into a weekly publication with its first color issue. Bob Goodman, a former writer for The Bird, says anybody who lived in Atlanta at the time knew about The Bird, because it introduced issues that weren’t popular in the South.

“The same issues would still be relevant today,” Goodman says. “It saddens me, but it doesn’t surprise me.”

What was often labeled “radical” in the State of Georgia was actually a message that was echoing all over the United States, even if few people were talking openly about such issues in Atlanta at the time. When the weekly was published, Coffin says it quickly became a voice for the anti-war movement. Many of the articles expressed concern over the Vietnam war, which Coffin says was not receiving proper coverage in the Atlanta Constitution. The name, The Great Speckled Bird, came from the title of a country-gospel tune made popular by musician Roy Acuff. Bob Goodman, Stephanie Coffin and Bob Malone in the first office of The Great Speckled Bird on 14th Street

“We grew incredibly,” she says. By 1970, it was the third largest weekly newspaper in Georgia with a paid circulation of 22,000 copies. “It was a popular paper because the message we were putting out was all over the country. . . . We were the largest weekly in Georgia for a long time. We covered draft refusal because, at the time, there was a draft center on Ponce De Leon where Ponce City Market is now. We covered other issues the Atlanta Constitution wouldn’t cover, because it was a staid, conservative paper.”

The Bird began five years after the assassination of John F. Kennedy and in the same year as the assassination of Martin Luther King Jr. Popular Bird writer, coeditor and cofounder Gene Guerrero Jr. took offense to moderate liberals such as Atlanta Journal and Constitution editor Eugene Patterson and publisher of the Atlanta Constitution Ralph McGill (both of whom had won Pulitzer Prizes for their work) for using King’s message of nonviolence against angry protesters. He attacked their editorials in a dissent titled “the liberal (im)posture”: “King was a gentle man who spoke of love and nonviolence, but he spoke even more often of the deep sickness gripping this country,” Guerrero Jr. wrote.

In 1968, a new set of voices was rising up in the fight for equality. Stokely Carmichael, chairman of the Student Nonviolent Coordinating Committee or SNCC, changed the strategy of the organization, departing from the nonviolent stance and coining the phrase “Black Power.” The Black Panther Party was forming chapters throughout the US, and even formed a chapter in Atlanta. Despite being a predominantly white staff, Coffin says The Bird supported the Black Panther Party because the 10-point program, with free breakfast for kids, was so progressive.

“The whole movement shifted in tenor,” says Coffin. “They had pictures with guns, and their black leather and their militancy was a whole shift from the ‘turn your other cheek’ of MLK. We supported the Black Panthers. We had Huey Newton on the cover and Angela Davis was on the cover, because we supported their efforts.”

The newspaper was central to organizing protests throughout Atlanta by publicizing activities of organizations like SNCC. But while blacks in Atlanta were working on dismantling years of racist policies, The Bird was supporting progressive issues such as legalization of marijuana, women’s rights and gay rights. Intersectionality among social justice groups was almost nonexistent, and Coffin says black people were primarily working on black issues.

The views expressed in The Bird made the newspaper a target. Kids were arrested for selling the political rag and consistently harassed by local authorities. During its first four years, no one in Georgia dared print the paper. So the staff drove once a week to a printing press in Montgomery, Alabama, says Steve Wise, former editor of The Bird.

“People knew when we came out on Thursday morning,” he recalls. “People would come out and get the papers and they could sell right away. I would go to Georgia State and sell about 75 papers in an hour. Ralph McGill would walk by, and I would try to sell him the paper, and he would turn his nose up.”

Though it was a popular paper, there was little to no money being made, says Wise. The budget covered the expenses to print and distribute, and the staff was paid $3 a week. Most people volunteered to draw the cover art, write and handle administrative work. The hippies that hung out on 14th Street made money selling the paper, but it wasn’t enough to cover legal costs. Wise says the ACLU was a saving grace.

“The post office refused to deliver the paper because we had an advertisement for an abortion clinic, but the ACLU made them back down, so we didn’t have to go to court for that,” he says. “We couldn’t have done that without the support of the ACLU. They were very good. They supported us all the way through. Without their legal help, we would have been sunk.”

Wise says Fulton County, Dekalb County and Cobb County finally backed down and agreed to stop harassing the kids, but it took a while. Then on May 6, 1972, at 5 a.m, the office located at 240 Westminster St. at the north end of Piedmont Park was firebombed. Wise says he suspects Sam Massell, the first Jewish mayor of Atlanta and a Democrat, was behind the bombing. The bombing happened just days after The Bird published an exposé accusing Massell of turning a blind eye to corruption in the city, especially when it came to family members who owned property.

Massell denies bombing The Bird, claiming he read the newspaper. “If they were still here, I’d send them press releases,” Massell says. “I didn’t agree with them on everything and thought many times they were so far off, especially with the real estate option accusations. The area was inundated with hippies, and they ran a story accusing me of bringing hippies in the area to run down the value of the land so I could buy it at a lower price and make a big profit or something like that.”

Massell admits he had to manage the flower children and motorcycle gangs, and opened up a police precinct on 14th Street. However, he was against removing “the hippies and flower children” as long as they obeyed the law. “I was very liberal minded about them,” he says. “It wasn’t my desire to do anything. During Freaknik, I tried to get the press to come in [and] read about the flower children, because it was similar except they were white. It was bumper to bumper cars on 14th Street. They were wall to wall on 14th Street, and it was very similar as far as management, but we had laws, and they had a right.”

Sen. Nan Orrock (D-Atlanta), cofounder of The Bird, says “the powers that be” tried their best to silence the staff. On May 26, 1969, The Bird printed an issue with a man carrying an assault rifle in front of the Coca-Cola logo with the words, “C’mon and Get It Motherfucker.” The police stopped sales of the paper citing the use of profanity. The Bird sued Herbert Jenkins, the chief of police of the City of Atlanta on the constitutionality of the Atlanta profanity ordinance. Orrock ,who was the manager of the regional office of the ACLU, says it was an “infringement on the publication’s First Amendment rights.”

Orrock says she looks back on those events as a timeline on the city’s evolution on issues such as women’s rights, racial justice and gay rights. She isn’t disheartened that, despite all the work done in the ’60s and ’70s, racial inequality and sexism persist. In fact, she says we’ve come a long way from a time when women had few rights to a time when Stacey Abrams can win a primary gubernatorial election in Georgia.

“My mother couldn’t get a divorce when The Bird was printing,” Orrock says. “Now look at all the movements. Look at everything that is being done. It’s just proof we need to keep fighting and we need more people to be resistant and do the work to fight inequality and hate.”