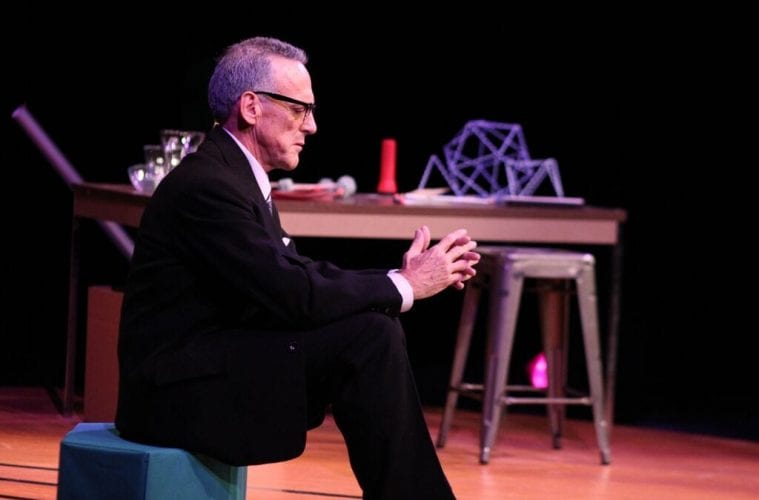 Legacy Series: Theatrical Outfit artistic director Tom Key seeks to bring the truth of the human spirit to the stage

Tom Key’s instincts for summoning the right words at the right time have served him well for over 40 years as an actor, playwright and director. Theater critic Curt Holman has described Key “as an actor with such energy that even standing still, he seems to quiver like a divining rod.” He has appeared in over 100 productions from Off-Broadway to Los Angeles, and is well known to local audiences for his many starring roles including in the Alliance Theatre’s Our Town and True Colors’ Guess Who’s Coming to Dinner.

He has directed everything from Horton Foote’s Dividing the Estate to Athol Fugard’s Master Harold and the Boys, which was named ArtsATL’s “Best Production” of the 2013–14 season. He has guest starred with the Atlanta Ballet and the Atlanta Symphony Orchestra, and he made his Atlanta Opera debut last fall before returning to raves in this spring’s Out of Darkness: Two Remain. A two-time recipient of The Governor’s Award in the Humanities, he has also received two Mayoral proclamations for his service to the city of Atlanta.

A longtime champion of regional theater, Key says, “New York is like the state fair of theatre. It’s where the prize-winning tomatoes are judged, but you don’t grow those prize-winning tomatoes in the midway.” Instead, he believes they are grown in places like Atlanta, Key’s home since 1986, where his mentorship of emerging artists has helped the city transition from being a consumer of great art to an incubator of great artists.

“Having Tom champion my stories has been a dream,” says Decatur-native playwright Lauren Gunderson, whose Miss Bennett: Christmas at Pemberley made its Southeastern premiere at Theatrical Outfit last winter, and whose The Book of Will will have its debut there in August. “It’s hard to grow up wanting to do theater in Atlanta without knowing and admiring him. There’s a regalness and classicism to his speech and presence that elevates not just what he’s saying, but the emotions he brings to a role.”

Adam Koplan, artistic director of the Flying Carpet Company, describes Key’s acting as soulful, deep, believable and real. “Tom has a lot of charisma and is able to project himself to the back row with his voice and gestures,” he says. “But he uses those gifts in service of rendering clear and honest characters who have an inner-reality about them. . . . In my career, I’ve managed to get close to a number of people I put on pedestals as a child. Most of them don’t really stand up. But Tom is actually much deeper — and a deeper artist — than even I thought of him as a wide-eyed kid.” Not bad for a boy from Birmingham whose very first experience in a local community theater threatened to be his last.

“I tell you, it didn’t get off to a great start,” says Key. “I was seven years old and remember sitting on the second row, thinking the adults were making fools of themselves. None of it was believable to me. They talked to us loudly and slowly because we were children. There was this intention of ‘Look at me! Applaud for me! Laugh at me!’ The insincerity of the production, somehow, made me feel embarrassed.”

Fortunately, several things happened over the course of his freshman year in high school that encouraged Key to give the art form a second chance.

First, Birmingham-natives Mary Badham and Phillip Alford were cast to play Scout and Jem Finch in To Kill a Mockingbird after auditioning at the same theater that had formerly embarrassed Key, making him think, “maybe there’s something significant and important going on there.” Then, after auditioning for his first play, Key’s drama teacher said she believed he could be a professional actor. She promised to cast him in all of her plays and invest all her training in him, if that’s what he wanted.

“That’s all I needed to hear,” says Key. “She gave me a dream that I didn’t realize I had. Up until then, I could see myself as a preacher or a politician, but somehow when Dorothy Walker called and said ‘You can be an actor,’ my whole body, my whole self, my whole mind, my whole soul said, ‘Yes!’”

And finally, his parents gave him a trip to New York City to see a series of Off-Broadway productions with his drama club during Christmas break. While watching A View From the Bridge, Key says that, although he didn’t grasp the content on a micro level, his understanding of the experience on a macro level was a revelation. “I’m 14 and begin to understand that the theater is a place where, if we’re going to make it as a species, this is part of it,” he says. “That’s when my life changes.”

Prior to finding his tribe in the theater, he says he struggled academically. “Most of my friends went to Ivy League schools, and they made great grades easily. I made good grades, but I had to work literally ten times harder than they did. In those days, there was no such thing as learning disabilities. There was one way to work. But when I got into the theater, for the first time I had a way of gathering information and understanding.”

Growing up in the Jim Crow South, Key could not understand the disconnect between what he was taught and what he knew to be true. The first time Key accompanied his father to drop off their family’s housekeeper, an African American woman named Katie, at her home, his blood ran cold at what he recognized as a manifestation of cruelty and evil. “I saw want,” he says. “I saw hunger. I saw anger, poverty, injustice. And it made absolutely no sense.” He remembers feeling like the world was cracking apart and perpetually on the brink of war. “I had a response, but no language,” he says. “There was a coldness to my heart. I felt unsafe . . . [as if] something very dangerous was loose in the room. I couldn’t process that. I couldn’t form an argument, but it just seemed wrong.”

Though his first and favorite storytellers were the preachers at Dawson Memorial Baptist Church, their condemnation of homosexuality as “an abomination” likewise didn’t square with Key’s observations of a beloved mentor, the artistic director at a local theater who was generous, kind, cultured, progressive and gay.

“I think every family has unspoken contracts,” says Key. “I didn’t realize that was in the fine print of my contract.” But when family disagreements finally escalated to the point his father threatened to stop paying his son’s college tuition and take away his car, Key dropped out of the University of Alabama, handed over his keys and forfeited his membership to a club that codified the kinds of rules he could neither rationalize nor respect.

Key put himself through school — earning an undergraduate degree in English Literature in 1973 and a graduate degree in Theatre Arts in 1977 from the University of Tennessee, Knoxville. But no matter how far he traveled from home, he could not outpace the roadblocks.

“There were these walls that I kept encountering in religious movements, politics and culture,” he says. “But I was longing to know, ‘What is the human enterprise? Who are we in the global sense? Where do we come from? What does it mean that we’re together? How do we build bridges?’”

Paradoxically, the answer dawned on Key when he was forced to acknowledge the barriers he’d constructed in pursuit of being a righteous Christian. While discussing a play in his Modern American Drama class at UT, Key was trying to determine if he and the playwright shared the same faith view, in which case, he says, he could respect her work. His professor called him out on it later in a private meeting and asked Key to consider the illogic of wanting others to respect your point of view if you’re unwilling to practice the same standards. “My professor could have eviscerated me in that class,” says Key. “But he didn’t make me feel hurt or judged. I just felt it was one of the best questions I’d ever gotten.” Tom Key performs in Theatrical Outfit’s 2015 production of R. Buckminster Fuller: The History (and Mystery) of the Universe. (Photo by BreeAnne Clowdus)

Asking questions, creating room for conversations and cultivating compassion by producing world-class theater is Key’s mission as artistic director at Theatrical Outfit. He has little patience for the strain of naïveté that masks intentional ignorance. But he acknowledges that empathy takes practice. “It doesn’t come naturally,” he says. “And it can be scary. But we have to gather information in order to find common ground.” By mounting productions like Janece Shaffer’s Brownie Points and Horton Foote’s The Young Man from Atlanta at Theatrical Outfit, Key has kindled meaningful dialogue around race, religion, sexuality and police brutality.

He believes art should always leave us somewhat changed, but he stops short of romanticizing the life of an artist. As “thrilling, fun, sexy, mind-blowing, joyous and provocative” as the work can be, he says there are invariably stretches where it’s “hard, scary, mundane, rote, demanding, sad, sorrowful and impossible.” A self-described “willed optimist,” Key knows he has to balance his inclination toward melancholy. But Atlanta-based actress Brenda Bynum sees his default setting as an asset. “Tom shares with Flannery O’Connor a strong religious faith and an outsized talent for expressing the passionate vision of the dark poetry and deep humanity of Southern life,” she says.

Given the current sociopolitical climate, Key says he senses a heightened hunger, passion and anxiety to know where we’re going, what the outcomes are going to be and what the future is going to be like. And he is confident that watching fictional characters in action can be the North Star that informs our own personal actions. Inspired by a quote from the ancient Greek philosopher Heraclitus, who said, “Character is destiny,” Key dubbed 2017–18 the Season of Character at Theatrical Outfit. From the epic tragedy of The Hunchback of Notre Dame — which started the season last fall — to one of the great musicals of the 20th century, 110 in the Shade, which will close the season out when it opens this week, Key believes the characters’ journeys can contextualize the real-life challenges or complexities that tend to overwhelm and confuse us.

“It’s not the kind of ‘action’ like car chases,” he says. “It’s the action of the movement of the human spirit from one place to the next. That’s what compels us to see the same story over and over. Stories like Hamlet or Fences, even though we know how it’s going to turn out . . . Theater is the one place where the only agenda is Once upon a Time. The story can confirm what we already know, and affirm what is true. But it can also challenge us, provoke questions and allow us to explore the possibilities of other truths. It is a gift, and we are stewards to it. We neglect it to our detriment.”