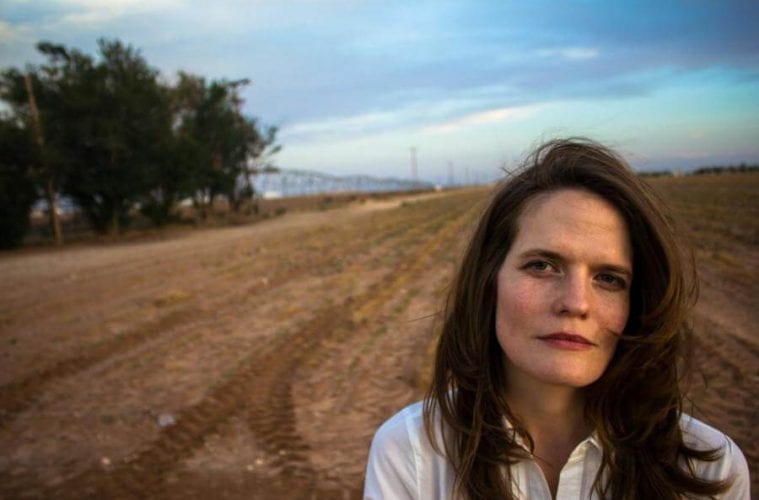 Editor’s Disclosure: ArtsATL Executive Editor Laura Relyea has worked with Rebecca Gayle Howell in the past at Oxford American

One could argue we live in the golden age of literary dystopia, with the resurgence in popularity of classics like George Orwell’s 1984 and Margaret Atwood’s A Handmaid’s Tale, as well as the emerging genre of cli-fi — speculative fiction set in a place of environmental devastation. In American Purgatory, winner of the 2016 Anne Sexton Prize in Poetry from Eyewear Publishing, Rebecca Gayle Howell takes on dystopia through the poetic imagination to haunting and chilling effect. Howell creates a driving, narrative pull through the collection that would draw in even the most hesitant reader of poetry. Yet, the individual poems, through evocative imagery and lyric suspension, dramatize the timelessness, the senselessness, the fractured chronology and warped history of a ruined world. In American Purgatory, time has stopped. There is no clear sense of order, of causality; the characters are trapped in an ever-present, between past and future, between heaven and hell. In the opening line of the first poem, “It’s Like This,” the speaker states, “No one was born here.” “Here” is a place divorced from history, from progress. “Here” is purgatory.

Dystopian literature often explores social injustices and environmental threats by imagining how, if left unresisted, these forces might achieve their most terrible, logical conclusion. Howell, a Kentucky writer, follows this tradition keenly, imagining a future ravaged landscape in the American South that clearly echoes the historical injustices and struggles of the region: slavery (“All we grow here is cotton stalks. Thirsty weed/that sells), “stand your ground” laws, income equality, as well as the looming environmental and economic threats of global warming, which the New York Times recently reported would likely strike the South the hardest of any region in the United States.

Because there is only the present, Howell leaves the specifics of “how” the world of American Purgatory came to be for the reader to imagine, yet she conjures a vivid, disturbing landscape in the wake of whatever choices humanity made (or failed to make). The characters move through a world of ecological ruin marked by extreme drought, dust storms, oppressive labor, absent mothers, religious zealotry, guns, physical deformity and ever-present death. Above all, this is a world without water. The desire for it animates the imagery of the book, as in the first poem where the speaker tells us:

When I look behind me, the

day lines the road’s shoulder with black trash bags that

shine in heat like water shines when you want to get in it.

But the lust for water also incites widespread brutality, its absence the greatest cause of suffering: “Few animals make it. The scorpions do okay,/ but the big hides need water, and no one shares.”

Water is also how we come to know each character. Where Howell challenges, warns and disturbs through setting, she heartens the reader through a motley cast of endearing souls. Little is an old man who works as a water diviner and well-digger, an outcast with almost mystical powers (“I like the way I feel when Little finds a spring”). The Kid, though physically deformed by the environment, is a rambunctious, playful child (“riding his bike, Fibonacci spiral in the cement lot”) who steals water for his family. But most importantly, there is Slade, the narrator’s closest companion.

In “Every Job has Its First Day,” the narrator meets Slade while he is “pulling minnows out of the dry river.” Slade finds meaning in religious fervor. It gives him hope, a sense of purpose. He preaches his doctrine, and lives it, everywhere — even in a pathetic fishing outpost: “he wore those rubber boots, though the sun was/ an anvil and very little wet,” and urges to the speaker to “relax the hand” to not scare away the fish as she reaches into the water. He tells her, “You have to believe it . . . You don’t mean any harm.” Slade believes in the promised salvation of work, no matter how his suffering refuses to lessen: a Biblical Job at his job. Even as he seeks to escape through faith, his faith ensnares him. In a pair of poems: “Seeing is Believing” and “Believing is Seeing,” the narrator challenges Slade’s logic that all the suffering around them is prophecy and that they must respond through violence:

a burrow owl, when in danger, will dig down

and sound a viper’s rattle to fool the one

who hunts him, or, at least, fool himself

But the narrator’s questioning isn’t only about Slade’s beliefs, about the limits and dangers of religious faith. It also describes the complexities of intimacy — the frustrations of human connection on the most mundane level, even in a post-apocalyptic world. Sometimes Slade annoys the speaker like a good old fashioned husband. She fantasizes about one day saying to him: “Slade, I’ve been sent a holy word: Shut up.” But she also desires him, as we see in the book’s sexiest poem, “I Want the Sundown Work,” where he teaches the narrator to shoot. The poem charts their rise toward pleasure — not only physically but also in momentarily overpowering death: “We detonate. I shake. Killing feels so little like dying.” The bond between them is real, moving in its familiarity — the desire to connect, the ache to feel free of suffering, the thrill of danger.

Throughout the book, Howell has also interspersed “maps” or “visual poems” — collages of colonial-era images drawn from the British Library’s online archives. Though they work to orient and deepen the reader’s understanding of this world — in particular its connection to the forces of capitalism and colonialism — the maps succeed most when they also engage directly with the story, as in “Map #4: Detail of Slade’s Heart,” a yin-yang-esque, tornadic swirl of light and dark that both poignantly and humorously captures the internal struggle of the character.

Through Howell’s rapturous storytelling and visceral imagery, we feel this world in our bones — both the acute edge of man-made oppression and destruction as well as the redemptive force of friendship, community, communion with nature and faith. American Purgatory is a visionary work, and Howell urgently reminds us why our planet and the lives of others are worth fighting to protect — and that although the choice to act still lies before us, it can be taken from us at any moment.