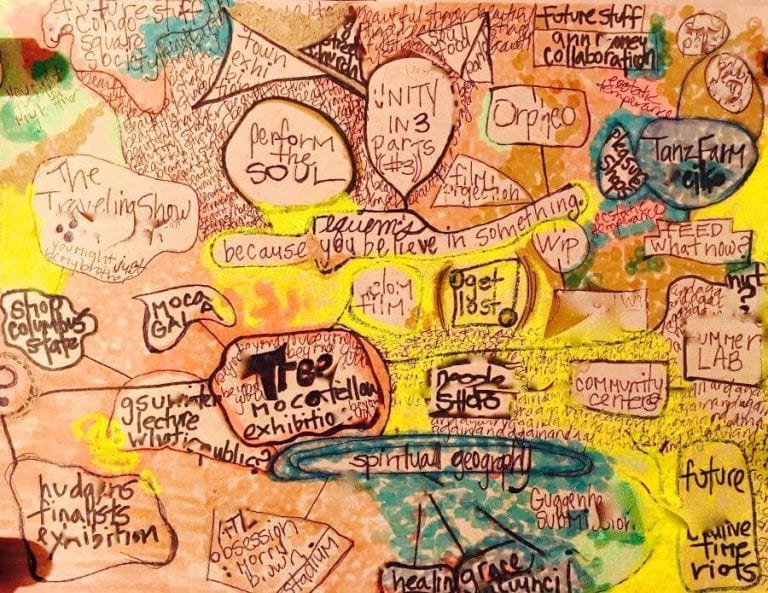 Drawing 4 is a collage of choreographic thoughts by Stallings. (Photos: Lauri Stallings/glo)

People who want to understand choreographer Lauri Stallings’ “social art” — community-driven work that has enlivened cities and towns across Georgia — will soon have plenty of chances to see it, feel it and help create it.

Starting tomorrow, Stallings, members of her contemporary performance group glo and dozens of people from Atlanta and elsewhere will converge at the Museum of Contemporary Art of Georgia (MOCA GA) in the room for tender choreographies. The eight-week exhibition will examine Stallings’ reflections on choreography as critical dialogue on contemporary social and political issues. As part of that project, MOCA GA will retain sketches, drawings and other visual elements of the exhibition in its permanent collection.

Organized by Annette Cone-Skelton, director of MOCA GA, and curated by René Morales of the Perez Art Museum Miami, the event marks the first time MOCA GA has named a dance-maker as a Working Artist Fellow. It is also Stallings’ first solo exhibition in a museum — but Stallings is quick to point out that artwork is often best created when people work together, not alone.

Stallings marks rhythm and pacing with a voice not unlike meditative chant. She gives dancers a stream of evocative images as they shift from one kinetically charged form to the next. At one moment, three dancers move with a sense of hyper-kinetic awareness, like a pride of lions migrating across an African landscape. Later, dancers plod slowly and deliberately, like prehistoric dinosaurs, whose bones will one day stand in museums. Stallings later encourages dancers to think of their ancestors, past and future.

Side by side, the dancers glide along a serpentine path and then gather into one large oval, standing hip to hip. Their arms extend softly, low in the front, gradually higher toward the back, like appendages of a single-celled organism that’s diagonally tilted as if suspended in fluid. As each dancer’s arm gently propels the next, the oval form revolves in a cyclical motion.

These group forms embody a philosophy that is all about art based on, or inspired by, human relations and their social context, a “relational aesthetic” that has informed Stallings for most of the eight years since she founded glo in Atlanta and has since brought her unique form of civic action through movement-based performance to communities in Atlanta, New York City, Miami and across Georgia.

One of glo’s most notable “civic actions” took place about 35 miles south of Atlanta in Griffin. Like many Southern towns, the railroad tracks divide downtown Griffin from the historically black Fairmont neighborhood. Only one bridge in Griffin crosses those tracks. Naturally, Stallings chose that place for her temporary public art — a “Movement Choir” during which glo artists took pedestrians by the hand and walked them across the bridge, literally crossing the longstanding divide.

The action inspired community leaders to invite glo back as part of efforts to restore several at-risk historic buildings, including a Rosenwald school. Last April, the city brought glo in to “resuscitate” the 1862 Eighth Street Baptist Church.

The church organization had outgrown its original building and had moved to a larger space. The historic building had not been used as a sanctuary for about 35 years, Stallings says, and had been shuttered for most of the past two decades. All day, every day for six days, glo invited people into the space to engage in everything from watching glo rehearse to movement classes for people from all walks of life; from artists’ conversations to old-fashioned floor-scrubbing. Atlanta-based rap group Soul Food Cypher gave a concert on the final evening. The sanctuary felt like the inside of an old violin that had been recovered from someone’s attic, lovingly restored and then played for an audience by a gifted musician. The church walls resonated with new, positive vibration.

Such intangibles are hard to describe, record or preserve. In conceiving the room for tender choreographies, Stallings asked herself, “How can social performance exist as a museum exhibition, continuously accessible to the public?”

During museum hours, attendees can watch glo artists develop new choreography. People can compose rhythms with a group of people and make choral music together. There will be yoga classes and workshops for movers with or without formal dance training. Every Saturday afternoon, a glo moving artist will give a performance in the gallery from 11:00 a.m. until 5:00 p.m. closing.

In keeping with glo’s commitment to making work available to the public, Stallings has scheduled five admission-free “Happenings” in the evenings, after normal museum hours.

Another question Stallings had to address in putting together the show was: How does choreography become an exhibition? How do we preserve temporary public art when the materials are “interchangeable and visceral moments between people?”

Stallings decided there are other ways to capture the essence of a fleeting moment. Visual artists Susan Cofer and Maria Artemis — both of whom have sketched glo in the past — have work in MOCA’s permanent collection. On the evening of July 20, during “Performing Archives,” the two artists will interact with glo moving artists, aiming to create new works inspired by glo’s movement. This can show that archiving isn’t necessarily a private or cloistered activity, Stallings says. In this case, the public can be part of “active archiving.” It’s an experiment, Stallings says, but it’s safe to say the works may become part of the exhibition and may go into MOCA GA’s permanent collection.

The museum’s north and west walls will feature Drawing 4, a floor-to-ceiling mural based on sketches and drawings that capture her choreography in hues and spiritual terms, Stallings says. She describes Drawing 4 as “a collage of systems related to choreographic thinking.”

The images grew out of the need to map landscapes where her work took place, starting with And all directions I come to you, an epic, six-hour work that ran for six weeks in New York City’s Central Park’s North Woods.

Eventually, her drawings became an essential tool for visualizing her work, and for charting the topography of wide-ranging site-based works. They evolved into a form of meditation, which enabled her to outline her thoughts, ideas and other intangibles.

“I consider it a map of interstices, the soft pastels guiding me to where future force fields may be covering two gallery walls,” Stallings says. She hasn’t revealed the drawings outside of her inner circle until recently.

A North Woods waterfall partly inspired St. Marks, a 10-foot “riser sculpture” that will hug the room’s south corner, formed on an idea of the cascading form of descending rocks. Children need a place to climb; older people need a place to sit, Stallings says. And in general, the riser will “float us into other perspectives.”

Dancers will appear in diaphanous light blue costumes by Margaret Ann Dinkins (Stallings’ mother), who designed costumes for the past Liquid Culture summer series. People are asked to wear light blue when they attend — so that when they enter the gallery, they’ll be part of the art-making experience.

Stallings decided to choose a color that represents unification in today’s polarized society: “I spent a lot of time with the sky and with the water, and the light blue told me that there were ways in and out of consternation and confusion,” she says. “It kept taking me to a more liquid space that I prayed was universal, that the sky is universal still, and that the water was still universal.”

Wednesdays and Saturdays are Making Days, when people can make origami birds, paper doves that symbolize glo’s ongoing “migrational” works that have traversed public spaces from Little Five Points to Lenox Square Mall, from Castleberry Hill to the Woodruff Arts Center’s Sifley Piazza, from the bustling intersection of 15th and Peachtree Streets to Sol LeWitt’s 54 Columns.

“Those paper birds, they go in someone’s hand, and it’s just another form of memory,” Stallings says.

Thus, glo will take its choreographic systems out of the gallery space and onto sidewalks and corner spaces of the Old Fourth Ward on July 29. Simply called “MIGRATION,” they’ll be in the midst of “that really vibrant melting pot that happens on the weekend in Fourth Ward,” Stallings says. “It should be fairly righteous and a little wild.”

Here’s a full listing of scheduled activities (all at MOCA GA, and free and open to the public, except where noted):

the room for tender choreographies: Opening Reception + Exhibition Opening
A site-based show and meditation on choreography at the intersection of what is political, timely and sincere, that brings together a constellation of people, installations and experimentation alongside glo. Saturday, 6:30–9 p.m. MOCA GA, 75 Bennett Street, Atlanta 30309. Students, youth 7–18 years and seniors $5. Members free. Children under six free. Nonmembers $8.

Community Builder: We like to work hard
Conversation that brings together women voices from communities in Georgia where glo’s work exists. Topics for discussion include migration, spirituality and belief, outside artists, and what preservation in rural Georgia looks like. Moderated by Atlanta writer Cynthia Perry. Tuesday, August 15, at 7 p.m. MOCA GA, 75 Bennett Street, Atlanta 30309.

Dance in the space as long as you’d like
Get down with community, museum staff and glo. Friday, August 25, at 8 p.m.

Dance of the Not-Yet
Stallings reveals five movement drawings made in the gallery over her eight-week residency, performed in the conceptual space of forever time by glo moving artists, in the dark. Friday, September 8, at 7 p.m.

people Movement SHOPS
For those who love to move and those who wish to love to move. No athletic or dance training necessary; all ages and backgrounds welcome. Tuesdays and Saturdays, 11 a.m.–12:30 p.m.

Making Days: paper doves
Interactive art-making paper doves, exploring identity and migration. The public adds to the pile of birds over the eight-week exhibition. All ages and backgrounds welcome. Wednesdays and Saturdays, 3–4 p.m.

gloSTUDIO
Experience the choreography process with Stallings and glo. All ages and backgrounds welcome. Tuesdays through Fridays, 12:30–2:30 p.m. and 3:30–5 p.m.

Singing CHOIR
Add your voice to the exhibition anthem. In these intimate sessions with glo, the choir will create rhythms, write lyrics and sing softly. All ages and backgrounds welcome. Saturdays, 12:30–2 p.m.