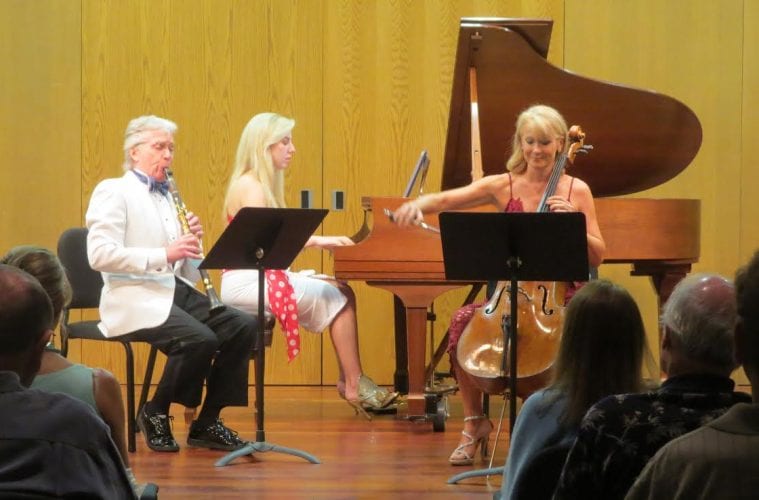 Western North Carolina has long been an easy getaway from Atlanta’s oppressive summer heat. It’s an area popular with tourists and owners of vacation homes from all over. It also draws top-level classical musicians, not just from Atlanta, to perform at the Highlands-Cashiers Chamber Music Festival, now in its 37th season.

For its penultimate weekend of concerts, the festival’s artistic director, Atlanta pianist William Ransom, had originally booked preeminent cellist Zuill Bailey and his frequent collaborative pianist colleague Natasha Paremski for the two pairs of concerts shared by Highlands and Cashiers, with the legendary American clarinetist Richard Stoltzman joining them in Sunday and Monday’s concerts. But Bailey bailed about two weeks ago. To take his place, Ransom was able to snag Sara Sant’Ambrogio, an equally renowned cellist and member of the Eroica Trio — a group that has been a frequent festival guest and part of last year’s series.

The combination of Stoltzman, Sant’Ambrogio and Paremski offered the opportunity for an interesting mix of musicians for Monday’s “Three B’s” meat-and-potatoes fare of Bach, Beethoven and Brahms at the Albert Carlton Library in Cashiers.

The program was a kind of a “BBB sandwich” with the Clarinet Trios of Beethoven and Brahms on either side and one of J.S. Bach’s unaccompanied cello suites in the middle. That the two trios were programmed was only natural, aside from their place as solid anchors to the repertoire, as Stoltzman’s 1995 recording of both pieces with Emanuel Ax and Yo-Yo Ma received a Grammy award — one of two for Stoltzman, who has been so prolific over the years as a recording artist that Sony released a mammoth 40-disc box set of his recordings last year.

The program opened with Ludwig van Beethoven’s Trio in B-flat Major, Op. 11. Written in 1797, it is redolent of the composer’s “classical style” with its Haydnesque leanings but Beethoven’s observable personal signature, with a few clever twists here and there. The final movement is a set of variations on a theatrical tune, “Pria ch’io l’impegno” (“Before I go to work”), that was so popular in Vienna that street musicians were playing it. Beethoven, already recognized as a rising star in the city, more so as a virtuoso pianist and improviser than composer, appropriated the tune for his trio piece. Although the piano part is prominent, it doesn’t overwhelm the clarinet and cello, so it was a solid choice as opener to see how well Stoltzman, Sant’Ambrogio and Paremski melded as an ensemble — with good results.

Stoltzman, a Massachusetts resident who is also an enthusiastic Boston Red Sox fan and a Cordon Bleu-trained pastry chef, offered up in this concert an unambiguously bright tone in louder and higher passages, with a smoother, more voice-like character of playing emerging in softer passages, especially when ruminating in the instrument’s low chalumeau register.

Born in Moscow, Paremski emigrated to the United States as a child prodigy when she was eight years old, became a naturalized citizen and is currently based in New York. She and Bailey have recorded a number of albums — including an album of music by Benjamin Britten that entered Billboard’s classical music chart at No. 1 and stayed there for weeks.

Although the intimate performance space in the Albert Carlton Library offered only a baby grand, Paremski was able to invoke a wide dynamic range. Her boldest playing, however, bordered on too much sound for the space and overwhelmed the ensemble at one point, but through most of the concert was in fine balance.

For the middle of the concert, Sant’Ambrogio took center stage alone to play Johann Sebastian Bach’s Suite No. 3 in C Major for unaccompanied cello. She did not wallow in historicism, but as one who has said she knew Bach as a child before she knew language, put forth an attractively candid, personal rendition of the popular suite.

The concert closed with the autumnal musings of Johannes Brahms’ late-in-life Clarinet Trio in A Minor, Op. 114. Composed after Brahms had effectively retired, it was one of a handful of chamber works the composer conjured after having made the acquaintance of Richard Mühlfeld, principal clarinetist in the German town of Meiningen. It was a fine closing for the evening’s program of conservative classics — a comfortable, appealing concert for a restful getaway.