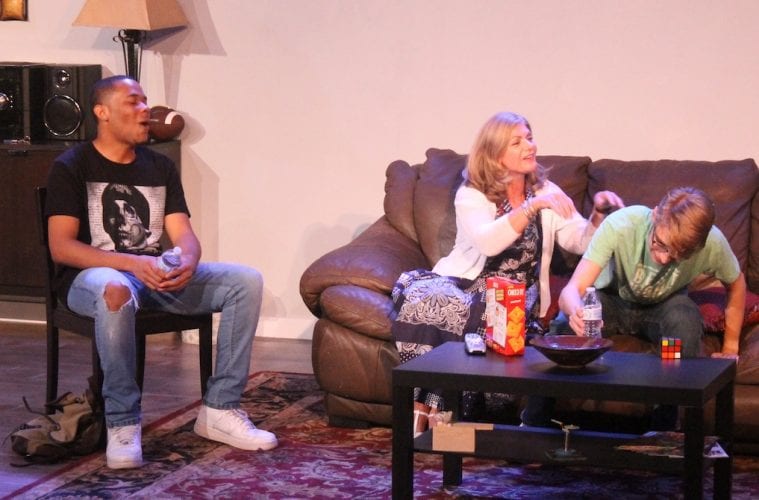 Avery Sharpe is having the kind of season that most theater artists only fantasize about. The actor-turned-playwright just completed acting in a sold-out run of Black Nerd at Dad’s Garage Theatre Company and his new play, Woke, has just opened at Essential Theatre. It’s a terrific work, too — one of the best the company has ever staged.

A cowinner of the 2018 Essential Theatre Playwriting Award, Woke (running at the West End Performing Arts Center through August 26) marks the debut of a bold, confident voice. Sharpe seems to have a natural gift for storytelling and for translating how people talk and interact with each other.

It’s the spring of 2016 in an unnamed Atlanta suburb. Adrian (Derrick Robertson) and Jesse (Paul Danner) have been best friends since seventh grade. Often inseparable, they bicker back and forth over the merits of Kendrick Lamar versus Eminem. Jesse jokingly accuses Adrian of being the whitest black guy he’s ever met. Adrian has a great relationship with Jesse’s parents, Martha and Fred (Kathleen Wattis and Fred Galyean), as well. The teenagers are about to graduate from high school and start college life, with Jesse at Dartmouth and Adrian at Morehouse.

While Martha is sleeping, the two invite a pair of young women over — Tanisha (DeShon Green) and Natasha (Karina Simmons). Jesse and Tanisha are in the initial stages of dating, and there seems to be an attraction between Adrian and Natasha, but Adrian seems to shy away from it.

At dinner one night, the characters’ dynamics change. Adrian is upset by the back-to-back police shootings of Philando Castile and Alton Sterling. He sees it as two men unnecessarily killed. Martha and Fred don’t see conclusive evidence the police did anything wrong.

Woke is a smart, richly written drama as well as one that feels — in Trumpian times — raw and topical. The central friendship is believable, and when it dissembles, it’s painful. Danner’s Jesses is a little stiff early on, but he really grows into the role. The character has to go through some self-reflection and have tough conversations with his parents and friends about race.

Martha and Frank aren’t written as villains, but they clearly enjoy white privilege. Martha is a stay-at-home mom who shops, goes to Zumba classes, and thinks nothing of ogling and trying to touch Tanisha’s hair. She and her husband voted for Obama and pat themselves on the back for being liberal and accepting but still cling to the belief that nothing bad happens to good people.

The play has a few faults. Woke takes place entirely in Jesse’s house. Adrian’s parents are mentioned a few times, but they are never seen. Having them present would have given Woke even more depth. At times, too, Jesse’s awakening seems a little too pat.

Nonetheless, this excellent show should have plenty of future mountings. It has some humorous moments but, at heart, is a drama that deals with racism in a way that doesn’t slam either side. Woke wakes you up, slaps you in the face and demands that you pay attention to what is really going on the world — and pay attention as well to what the gifted Sharpe has in store next.