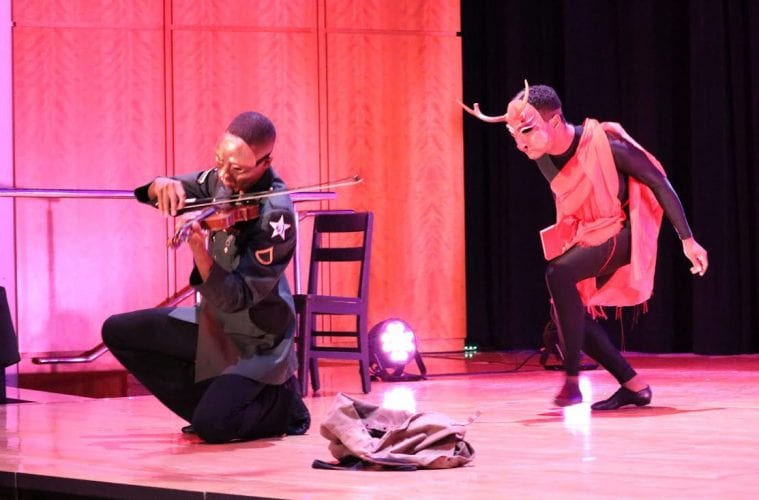 When the Charlie Daniels Band released “The Devil Went Down to Georgia” in 1979, the song that would become their number one hit, they were giving homage not only to the long tradition of competitive fiddling in America, but also to an iconic image drawn from deep European folkloric tradition: The Devil as a fiddler or violinist. The historical origins of the association are murky at best. In Christianity, the concept appears in neither the Bible directly nor its poetic paramour, John Milton’s epic poem “Paradise Lost,” from which many non-Biblical Christian concepts of heaven, hell and pre-Adamic battles between angels and the fall of Lucifer have been popularly derived. And yet, the musical alliance can be seen in art and lore over at least hundreds of years of Western history.

It so happens the relationship pops up in the context of a particular Faustian story of Russian folk origin, The Runaway Soldier and the Devil, that was the basis of L’Histoire du soldat — a multidisciplinary work with music by composer Igor Stravinsky and libretto by Swiss writer Charles Ferdinand Ramuz. L’Histoire du soldat (“The Soldier’s Tale”) reached a significant milestone this past Friday: the centennial of its premiere, when it was performed downtown in the Kopleff Recital Hall at Georgia State University. A repeat performance took place on Saturday, which was also streamed to the internet.

Under the umbrella of GSU’s Center for Collaborative and International Arts, this 100th-anniversary staging of Stravinsky’s L’Histoire was presented jointly by the university’s School of Film, Media and Theatre and its School of Music. Members of the GSU University Players, directed by W. Keith Tims, were accompanied by GSU faculty musicians under the baton of Stuart Gerber.

One of the most important and influential composers of the 20th century, Igor Stravinsky’s music evolved through a series of distinctive personal musical styles. L’Histoire du soldat was written in 1918, after the last of his trio of grand modernist ballets, The Rite of Spring (1913), and before the advent of his devotedly neoclassical period with Pulcinella (1920). It’s significant that Rite was performed one year before the start of World War I, in which the degree of human toil during war had never been seen before, and that L’Histoire premiered only a few months before the war’s end.

It was less a matter of being inspired by the war itself as much as wartime became financially lean for Stravinsky. He was broke and stuck in Switzerland, unable to access his royalties due to the 1917 Russian Revolution, nor his other usual sources of income. So L’Histoire was pragmatism. Stravinsky adjusted to a new creative style, pared down to essentials that could be inexpensively toured. The music of L’Histoire du soldat is scored for just seven instruments, but is complex enough to warrant a conductor.

GSU’s presentation on the Kopleff stage was credible and enjoyable, relying only on limited theatrical resources in terms of costumes, props and staging, with a narrator and chamber orchestra upstage behind the other actor-dancers who also wore masks.

A fine performance of the score by Gerber and his ensemble brought Stravinsky’s nascently modernist score to life, framing the story well throughout its intermission-less hour-and-a-quarter duration – not too long yet enough to feel like an evening that was worth the jaunt to downtown.