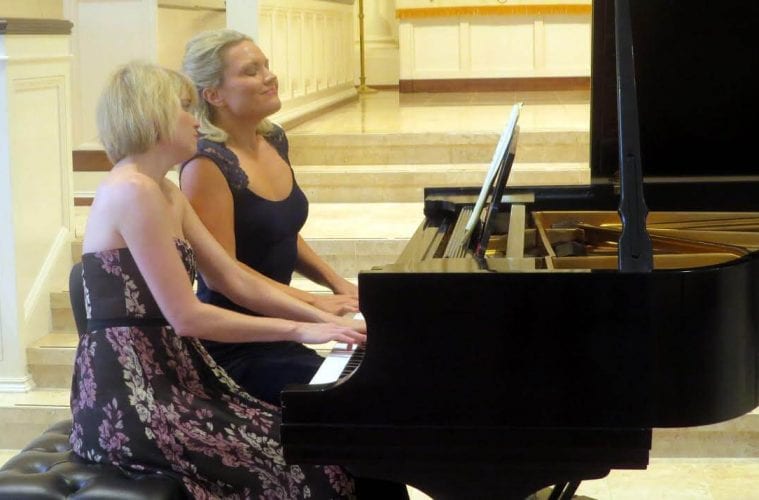 On this past Sunday’s pleasant afternoon, the Georgian Chamber Players presented a concert of music by Mozart, Saint-Saëns and Schumann in the sanctuary of Trinity Presbyterian Church in northwest Atlanta. The performers were pianists Julie Coucheron and Elizabeth Pridgen, violist Reid Harris, cellist Christopher Rex and guest violinist Amy Schwartz Moretti.

Moretti and Pridgen opened the program with Mozart’s Sonata No. 35 in A major for Violin and Piano. It is the penultimate among the more substantial half of Mozart’s violin sonatas, in which the violin and piano have an equal importance, rather than a keyboard sonata with a violin part of minimal significance — the latter typical of the times.  It is also more substantial than Mozart’s final foray into the genre, by dent of that work’s smaller scope, almost a sonatina. So this Sonata in A major really represents the pinnacle of Mozart’s works for violin and piano.

Moretti’s well-stenciled violin playing rose to the occasion of full partnership with Pridgen’s piano in this satisfyingly astute performance.

Pridgen and Coucheron performed “Carnival of  the Animals” by Camille Saint-Saëns in an arrangement for four-piano, four hands, by Lucien Garband, a friend of the composer and an editor at his publishing house, Durand. The original version featured two pianists — playing two pianos, not one — as part of an ad hoc chamber ensemble including two violins, viola, cello, double bass, flute (doubling piccolo), clarinet, xylophone and glass harmonica (an unusual instrument that in no way resembles the familiar “mouth harp” of American blues music fame). It was intended for performance in a private setting, and Saint-Saëns did not allow public performances nor publication during his lifetime.

Too often mischaracterized as a piece for children, the “Carnival” is filled with wit and satire that an adult contemporary of the composer would quickly understand. “Tortoises” parodies Offenbach’s popular “Can-Can” (the “Infernal Galop” from his opera Orpheus in the Underworld) by placing that tune in the bass register, played at an excruciatingly slow speed. Tunes by Mendelssohn and Berlioz get similar comic treatment in “Elephants,” as well as poking fun at himself and Rossini in “Fossils.”

But there is also more straight-forward, often lovely music in this suite of 14 short pieces. The “Introduction and Royal March of the Lion” set up the entire composition with sufficient pomp. “Hens and Roosters” peck and crow, “Kangaroos” blithely hop. “Aquarium” shimmered with a Chopin-esque grace. Soft chords underscored a persistent, lonely two-note bird call in “The Cuckoo in the Depths of the Woods.”

The work’s penultimate, and most famous, movement is “The Swan.” For this, Christopher Rex, who had been turning pages for the ladies, picked up his cello and joined in on the iconic tune. Although it was a surprise, it was not such a strange idea, as it is difficult to imagine “The Swan” without the elegant, flowing melody played on a cello. It was a clever solution to bringing out a tune that might more easily be lost in the flowing texture of the piano by itself.

The suite’s concluding “Finale” hearkens back to the piano tremolos in the introduction, then a build-up by the entire ensemble that leads to a quick-paced circus galop. Saint-Saëns gathers his menagerie together by quotation from previous movements, giving the “music critics” a final spate of braying before the final chords. The nearly half-hour “Carnival” was a lot of fun.

After intermission, Moretti, Harris, Rex and Pridgen performed Robert Schumann’s Piano quartet in E-flat major, Op. 47. A frequently performed and recorded work, it was written in 1842, a year in which the composer was unusually steeped in writing chamber music. It shows some small influence of Mendelssohn and Schubert here and there, but is a fine exhibit of Schumann’s originality. Of the four movements, my favorite is the second — a “Scherzo” that contains not one but a pair of “Trios,” which sound more developmental than contrasting, giving it a feeling more of continual forward progression than mere alternating sections.

The slow, song-like third movement required Rex to retune the low C string on his cello down to a B-flat, allowing the instrument to accommodate the fifth degree of the E-flat major scale at that octave as a pedal point over which the other instruments played. Rex had to retune the string back to C for the fast and highly contrapuntal final movement that plays off a three-note theme introduced at the end of the previous one.

Although Schumann allowed time for the cellist to retune during the opening of the last movement while other instruments are playing, the musicians opted for the safer route of stopping to allow Rex to retune before beginning the movement. Certainly a more secure choice, and the pause did not annoy, although one might understand Schumann’s likely musical intent to segue quickly from third to fourth movement. The quartet nevertheless brought the afternoon concert to a fine, well-wrought conclusion, in plenty of time to also enjoy the ensuing sunny evening.