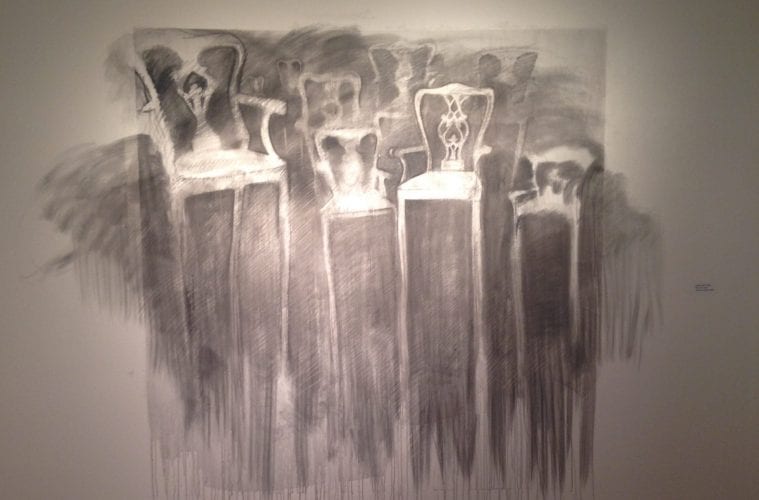 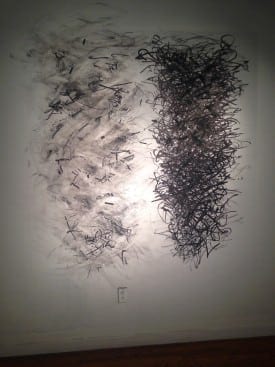 The premise of curator Karen Lowe’s The Drawing Experiment is refreshingly straightforward: Each of the 12 artists was assigned six square feet of wall to be marked only with dry media over the course of three weeks. The appeal of drawing on walls is obvious to every child, even without invoking the art world jargon of “site-specificity.” The works on view at the Chastain Arts Center, which will exist only until the exhibition closes on Sept. 12, result from the artists’ grappling with these constraints of scale, medium and surface.

Because this challenge is the exhibition’s only organizing principle, its themes and patterns emerge spontaneously from the participants’ own sensibilities. Some of the works stay within the confines of traditional figure drawing (Marie Matthews’ Jimmy) or use the large-scale format to explore connections with street art (Karl Kroeppler’s drawingexperiment.01). Of the several purely abstract works, Elyse Defoor’s Exposures 5 & 6 particularly stand out for their energetic dervish-like forms composed of strong, dynamic lines.

Taking the show’s experimental premise seriously, Kellie Romany boldly declines to use the entire space provided, inscribing in the empty space only a drooping, oval-shaped portal, roughly the size of a human head. Its fuzzy, decaying edges give way to a black pit at the center, occupied by an unidentified larval form just on the brink of emerging. Her untitled piece is also distinctive as the only one to recognize that the wall is a surface to be penetrated, rather than just a neutral support. 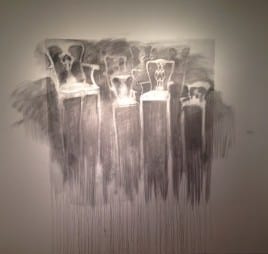 Many works in the show are overtly political, and here the unplanned nature of the exhibition allows the urgent concerns of the moment to rise to the surface. Jessica Scott-Felder’s somber and restrained The New Guests depicts nine tall, spectral chairs arrayed in a formless gray space. These empty chairs are a familiar motif in her work, but here they stand as a tribute to the victims of the massacre at the Emanuel African Methodist Episcopal Church.

In Carrying On, Jessica Caldas continues to explore themes of sexual assault, trauma and recovery, with each layer of the drawing representing a different stage in the process. Just as the past may be hidden but not erased, the earlier drawings are mostly submerged beneath the bold lines of the later ones, emerging only in fragments. For the curious viewer, Caldas has helpfully documented her invisible labor by posting the early stages of the drawing online. 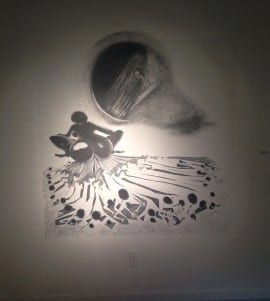 The show’s strangest and most visceral imagery belongs to Yanique Norman’s The Drapetomania Defects, a symbolically charged nightmare drawn from 19th century “race science.” It centers on the figure of an African-American woman who squats facing away from the viewer. Beneath her lies a heap of ropy, distorted mens’ bodies flowing in a torrent from her anus. Their abject forms stretch with their hands extended, desperately scrabbling at the empty space beyond the margins.

According to the tenets of scientific racism, the pathology of these black minds and bodies goes so deep that they are not even birthed, but merely shit into existence. Norman’s imagery is blunt, to be sure, but her aim is to discredit these dogmas by illustrating them in their most revolting forms.

The show’s brightest spot is Joseph Peragine’s whimsical Kitten and Duckling, which taps into the same sentimental impulses that fill social media feeds with delightful videos of unlikely animal pals, though whether this adorably looming kitten intends friendship or dinner is inscrutable. Appropriately, the drawing is paired with an animation that morphs a recklessly running duck into a tensed and ready to pounce cat and then back again. Many of the initial drawings for the animation were first done on the wall and then erased.

Not all of the experiments come off successfully, however. William Downs’ Reveling in a Bed of Thorne’s depicts a group of interpenetrating figures reclining in a state of reverie, but its graphite lines are almost uniformly thin and lightly sketched, making them hard to see clearly. What might be an effective composition on paper fails to translate to the wall. It’s also not helped by the exhibition’s lighting, which unfortunately washes out details in many of the works.

If The Drawing Experiment does not push the boundaries of the medium quite as far as the exhibition’s title suggests, it still collects a rich set of responses, both serious and playful, to its governing premise. It’s a testament to the continuing vitality of drawing itself that such thought, craft and effort could be expended on these evanescent creations.