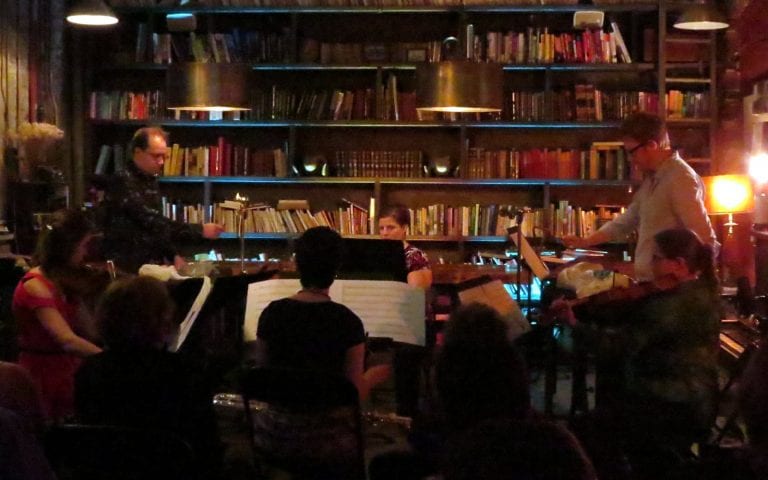 New music ensemble Chamber Cartel performed a concert of music by six different 20th and 21st century composers this past Saturday at the Goat Farm Arts Center’s intimate Warhorse Cyber Café. With the likely exception of Luciano Berio, most of the composers were not exactly household names for the audience, but the program offered an amiable introduction to their works.

Keyboardist Amy O’Dell opened the concert with Fabian Svensson’s “Toy Toccata (in Black and White)” (2009) for solo toy piano. It’s a short but intense etude that runs counter to the toy piano’s inherent cuteness, treating it as a percussion instrument with pitch alternations between black and white keys that are more matters of inflection, as one would find in speech, than harmonic or melodic import. O’Dell’s performance was both sassy and fun. O’Dell will perform an entire recital of toy piano music this Friday, July 31, at Eyedrum.

The Warhorse and Eyedrum are of reasonably comparable size, but the former is the more attractive venue, in large because of the latter’s location, issues of décor aside. Chamber Cartel’s own Facebook page made emphatic note of the presence of air conditioning at the Warhorse. The concert drew a capacity crowd. As the hot summer weather begins to mediate in upcoming months, Chamber Cartel will return to the Goat Farm’s more expansive Goodson Yard, but the likable Warhorse served well this concert’s mostly intimate body of repertoire.

Eduardo Marturet is perhaps best known in the U.S. as conductor of the Miami Symphony Orchestra. Likewise, his reputation is primarily as a conductor in his native Venezuela and abroad. As a composer, his most frequently performed composition has been “Canto Llano” (1976). Originally written for recorder (block flute) and a tape delay, it has been transcribed for a number of other solo instruments and ensembles.

In this concert, the version for solo viola and digital delay was performed by violist Sprite Crawford. The work is simple in its modal melodic language and (if one is aware of the intent) effective in evocation of the landscape of Venezuelan “Llanos.”

Klemenc returned to the stage to play Luciano Berio’s “Sequenza IXa” (1980). The piece is a definitive part of contemporary clarinet repertoire, but poses problems for the clarinetist — in particular with regard to multiphonics — if one is not playing a full Boehm clarinet with a low E-flat. There are no fully satisfactory solutions, but Klemenc’s performance held the listener’s attention well for the duration.

The only ensemble work on the program was “Die Goldenen Tiere” (2008) by Austrian composer Klaus Lang. In addition to Herron, Neal and Crawford, the performers included flutist Teresa Feliciano, hornist Candace Thomas and violinist Rachel Matthews.

Before it was performed, Herron cautioned the audience that it is a very quiet piece, so quiet that he hoped it could be heard over sounds of the air conditioner and the Goat Farm’s infamous passing trains. His caveat was well founded.

“Die Goldenen Tiere” is very much a “pianissimo” piece with occasional loud outbursts here and there played on triangles. The music’s overall volume, including the gently rustling of plastic grocery bags played by Herron and Adam Scott Neal, faced tough competition from the room’s background noise. It is worth playing again, but finding a space which is really suitable will be a challenge for an ensemble on a shoestring budget.

However, there was redemption in the end. The concert concluded with “Loops II” (2002) for solo vibraphone by French composer Philippe Hurel, performed with verve and vigor by Herron to bring the evening to an upbeat closure.

Chamber Cartel has recently released two CDs, each profiling the work of a single composer: The Shape Distance, featuring the music of Marc Yeats of that same name, and Interiors, featuring music by native Atlanta composer Adam Scott Neal. Both were available at side-stage at Saturday’s concert.