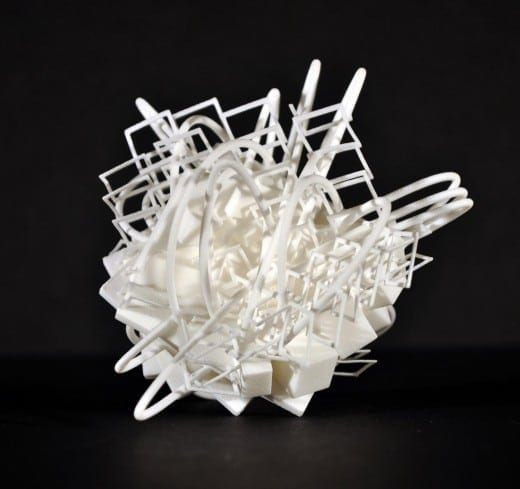 Ann Stewart’s Causa Sui, at Whitespace through August 1, extends her exploration of geometric spaces in etchings and graphite drawings into sculpture. All of her mediums are brilliantly represented in the show, but the central works are Stewart’s sculptural multiples produced through 3-D printing.

Stewart decided to explore her new medium because, as she says, she has always been able to rotate and navigate her drawings in her imagination and wished that viewers could follow her. (She’s all too correct regarding viewers’ limited ability to picture her two-dimensional renderings as actual objects; I had recently been describing them as abstract versions of M. C. Escher’s impossible spaces, but this turns out not to be so.)

Stewart produces her sculptures in a CAD program called Rhino, which she chose both for its cost-free access in the beta version and the relative ease of mastery for any artist familiar with Photoshop. She has accomplished an astonishing range of mostly curvilinear shapes that echo everything from the once-impossible designs of the Russian Constructivists to such actually existing forms as Le Corbusier’s cathedral at Ronchamp.

These concatenations of curves, slightly warped rectangles, and other combinations of form more difficult to describe produce effects that range from outright comedy (it is difficult not to smile at some of the endearingly explosive effusions of pure geometry) to complex tangles so thin as to rouse thoughts of transience and the intrinsic impermanence of matter. It’s a range of feeling aptly summed up by the name of the series of smaller works, Epiphenomena and Non Sequiturs. (There are also individually titled larger pieces, eight square inches as compared to the smaller works, three by two inches.)

Printed in white nylon, the sculptures are extraordinarily light and more durable than their fragile appearance might suggest. Produced in editions of five, they are priced so affordably that they suggest a future in which sculpture can attain the condition of printmaking at an accessible level of purchasing power.

They already demonstrate a present in which a mutated aesthetics of artistic space that has hitherto been restricted to architecture has begun to migrate into realms of sculpture that previously existed primarily in perspectival drawings.