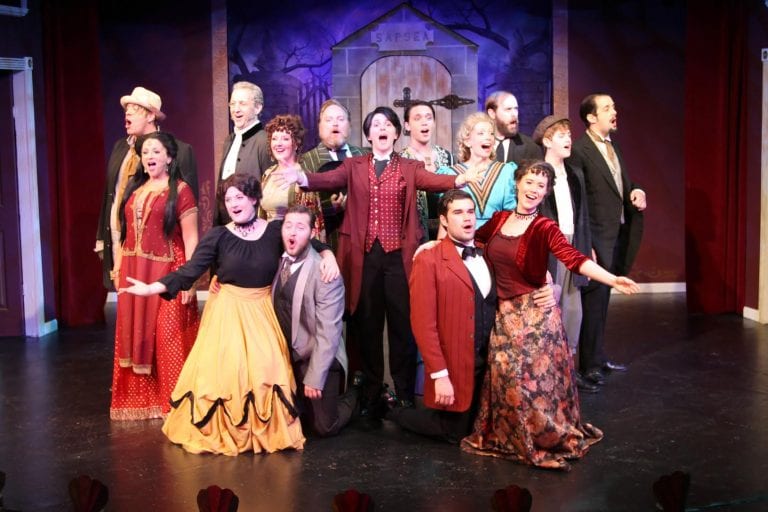 Review: Silly is as silly does in Stage Door’s charming, overly-long take on “Edwin Drood”

It wasn’t planned, but the summer of 2015 has turned into a musical theater carrousel in Atlanta. Besides Rent at Actor’s Express there’s Chasin’ Dem Blues at True Colors Theatre, the just-ended Cats at Atlanta Lyric Theatre and this weekend’s duo of Evita at Serenbe Playhouse and Memphis at Aurora Theatre, co-produced by Theatrical Outfit.

Not to be outdone, Stage Door Players is currently tackling/solving The Mystery of Edwin Drood. Running through August 2 at the Dunwoody-based company, this version of the musical is energetically performed, yet it can’t altogether conceal the fact that Drood hasn’t aged especially well.

A play within a play, Rupert Holmes’ musical is based on Charles Dickens’ last — and unfinished — novel of the same name. It’s London’s Music Hall Royale circa 1895 and the chairman/master of ceremonies is William Cartwright (Charlie Bradshaw), who guides us genially through the evening, explaining how Dickens passed before he could finish his tale.

Others in the large cast include Princess Puffer (Sarah Cave), who operates an opium den in London; Reverend Crisparkle (Stuart Schleuse), who loved Rosa’s mother; Durdles (Al Dollar) who is drunk most of the time; and twins Helena and Neville Landless (Jessica De Maria and Jordan Dell Harris), who might have secrets.

Got all that? Drood, who has been planning a wedding with Rosa and a move, eventually disappears and the second act begins six months later, with the character nowhere to be found. Eventually the audience determines the murderer of Drood, as well as two other matters, including which characters get partnered romantically.

Drood is the kind of musical performers love. They get to play dual characters and camp it up some. Director Robert Egizio has brought together a cast that is balanced and unflappable. Almost everyone has a moment, but the standouts here include Schmidt, Mattox, Cave and Hilton. Daniel Burns, as bit actor Bazzard, is another talented performer who has been seen memorably in a number of recent musicals, including Stage Door’s Godspell.

Most of the songs are cheerfully staged, from Schmidt’s “Moonfall” and Cave’s droll “The Wages of Sin” to the big numbers, including “No Good Can Come From Bad” and the first act closer “Off to the Races,” all abetted by offstage musicians Kaylee Bramlett, Teresa Feliciano, Laura Gamble, Nick Silvestri and Jonathan Swygert.

Yet there’s no escaping that at almost two-and-a-half hours, Drood can drag at times — and that the second act goes down a lot easier than the first.

Where Edwin Drood stacks up in the history of musical theater is debatable. Some worship it and its score, while others find both overrated. First staged on Broadway at the end of 1985, with Betty Buckley in its original cast, it won its share of Tony Awards (including Best Musical) in what was (arguably) a lean year. It’s not produced much these days, although the Roundabout Theatre Company staged a relatively brief Broadway revival in 2012 with Chita Rivera.

The real fun isn’t until the second half — the interactive aspect, albeit a gimmicky one, lifts the production, with characters mingling with the audience and aggressively pushing for votes.

Edwin Drood isn’t mean to be taken ultra seriously. It’s a silly show that knows how silly it is. Stage Door Players’ take isn’t likely to change one’s overall view of the musical but the hard-working cast make it a nice diversion.